Smith was 26 years old, hailing from Paulding County in Ohio. The Chattanooga Times Free Press describes how news of his critical injury, and later passing, spread by text message and Facebook post through his hometown, where old friends reeled in shock. They said they had been expecting Smith to come home for a Labor Day visit, and host old chums in Tennessee for an October trip to take in a Tennessee Titans game.

On Saturday, Smith’s friends from home shared memories about him. He loved baseball, like many members of his family. He pitched and played middle infield for Paulding High School. His dad was an assistant coach. After high school, Smith played at Defiance College, a Division III baseball team, the type of squad filled with men who know they won’t make it to the pros but want to keep playing anyway.

He also shared his faith often. Jason Thomas, pastor of First Baptist Church of Fort Oglethorpe, said Smith and his family had been attending for a little less than two years.

The UK Daily Mail reports Smith left behind a wife of four years named Angie, and three daughters under the age of six. 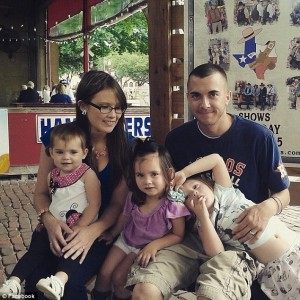 Smith attended Defiance College on a baseball scholarship, but suffered a shoulder injury and was unable to play. The college issued a statement expressing “deepest condolences” to Smith’s family, saying “his family and all of the families of victims of the senseless attack on our military in Chattanooga are in our thoughts and prayers,” as related by the Navy Times.

He joined the Navy in 2010, following in the footsteps of his grandfather, and had recently re-enlisted, serving as a logistics specialist. The Navy Times reports he was assigned to his post in Chattanooga last August. Before that, he served for three years aboard the amphibious assault ship Wasp, which was involved in training exercises in the Caribbean and along the U.S. East Coast, participated in Hurricane Sandy relief efforts, and assisted in testing the Marine Corps F-35B Joint Strike Fighter.

“Along with being a qualified Enlisted Surface Warfare Specialist, Smith is also qualified to wear the Navy Battle ‘E’ Ribbon, The National Defense Service Medal and the Pistol Marksmanship Ribbon,” reports the Navy Times. Unfortunately, he was not allowed to carry a pistol when jihad came calling in Chattanooga.

According to the Stars & Stripes interview with Smith’s family, which was conducted before his death, he was hit in the liver and colon by Mohammed Youssef Abdulazeez’s bullets. Multiple surgeries, a ventilator, and 150 units of blood were employed in the struggle to keep him alive. It was clear he faced a difficult battle for survival from the start, as his wife was told on Thursday to bring the family pastor to the hospital.

Among those offering condolences at the news of Smith’s passing was Ohio governor John Kasich, who said, “The murders in Chattanooga have claimed another victim, and Ohio has lost another hero.  Prayers for Randall Smith of Paulding County and his family.”

“My son is a hero. He died doing what he loved,” his mother Paula Proxmire told NBC News, after adding an American flag and a baseball mitt to the memorial at the scene of his death. “He would have had it no other way. He’s been my hero since the day I gave birth to him. He’s my life, he’s my world. He’s gone.”