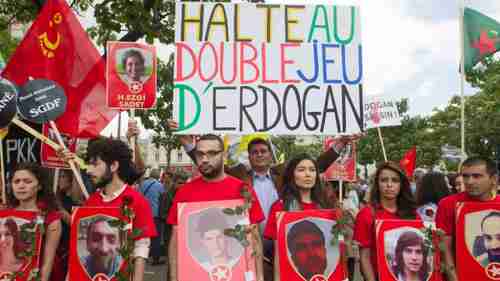 More than 1,000 Kurds and leftist Turks have marched in Paris to protest airstrikes by Turkey on Kurdish militant camps in northern Iraq. One banner held high at Saturday’s march read, “To hit the PKK is collaborating with ISIS.” AP

Turkey’s rapidly changing policy towards the war in Syria seems to have become more risky, complex and dangerous every day for the last six days, ever since Monday’s terror attack on Suruç killing 32 mostly young pro-Kurdish activists who were discussing plans to help rebuild the town of Kobani, which the Kurds had captured from ISIS in January. No one has claimed responsibility for the Suruç attack, but Turkish officials believe that the so-called Islamic State (IS or ISIS or ISIL or Daesh) is responsible.

The Kurdistan Workers’ Party (PKK), a communist separatist terror group advocating a separate Kurdish state of Kurdistan to be formed out of regions from Syria, Turkey and Iraq, has been conducting terrorist attacks against Turkish government officials for decades, including kidnapping, bombings and assassinations. Turkey and the PKK agreed to a ceasefire and “peace process” in 2013.

But now, that peace process is in jeopardy, after Turkey’s major U-turns and changes in foreign policy this week. Many people in Turkey fear a full-scale return to hostilities between the armed forces and PKK.

Early on Saturday, Turkish warplanes launched attacks on PKK strongholds in the Kandil mountains in northern Iraq, near the border with Turkey. These attacks were an almost daily occurrence before the ceasefire agreement.

The AKP [Erdogan’s Justice and Development Party] government, state institutions and the army have unfortunately taken steps that aborted the solution and peace process, as well as the effective ceasefire.

A plan to win back a single party majority again by creating a nationalist and militarist climate, making an impression of engaging in a comprehensive struggle against terrorism is a plan to burn the country.

According to a statement on the PKK web site: “The truce has no meaning anymore after these intense air strikes by the occupant Turkish army,” alluding to the separatist claim that Turkey is striking the “independent state of Kurdistan.” Hurriyet (Ankara) and AP and Hurriyet

In addition to the airstrikes in northern Iraq, Turkey’s warplanes have been striking ISIS targets in northern Syria, with the stated objective of setting up a “safe zone” or a “no-fly zone.”

This concept has a long history. Ever since the tsunami of Syrian refugees began flooding across the border into Turkey in 2011, Turkish officials have suggested that there may be a need to set up a “no-fly zone” in northern Syria to which the refugees could flee without having to cross into Turkey. However, this suggestion was never implemented, mainly because Turkey did not want to enter the war in Syria, and Syria’s president was loudly objecting to any talk of Turkey striking Syrian territory.

Like so many other things, this policy has been completely reversed since Monday’s attack on Suruç. Turkey is now planning to strike at both ISIS and PKK targets in northern Syria.

Unfortunately Turkey is surrounded by a ring of fire.

In such an atmosphere, Turkey tries to keep her democracy and development alive… these operations have carried a message to the countries in the region and to international circles: whatever happens in Syria and Iraq, in our border regions, we will not allow them to threaten Turkey’s security and will not hesitate to take necessary measures.

This has generated accusations that Turkey is using the that attacks on ISIS are a thinly veiled cover for planned attacks on Kurdish (PYD) forces in Syria.

The Kurds in northern Syria are separated into two large enclaves, one in the east up the border with Iraq, and one in the west. A major objective for the Kurds fighting ISIS in Syria is to control the region between the two enclaves and declare the united region a Kurdish state, something that Turkey will not tolerate.

Turkish sources say that there are currently no plans for airstrikes to target the Kurdish Democratic Union Party (PYD) forces in Syria, which are thought to be linked to the PKK in Turkey. But those plans could change if the Kurds gain more control of the border with Turkey. This was the meaning of Davutoglu’s statement that “whatever happens in Syria and Iraq, in our border regions, we will not allow them to threaten Turkey’s security and will not hesitate to take necessary measures.”

However, Turkmen in northern Syria claim that they are being driven out of their homes by Kurdish PYD forces, and they are requesting help from Turkey’s government. Hurriyet (Ankara) and BBC and AP and Anadolu (Turkey)

Arab News: Turkey is lying about the attack in Suruç

An analysis in the Arab News says that the evidence points away from the claim that ISIS was responsible for the attack in Suruç, and points to the PKK as the perpetrator:

The columnist concludes darkly that the attack was a conspiracy involving Turkey, the PKK, and the United States, although no evidence of that was presented.

I believe that Turkey’s new policies this week are potentially explosive. I have been saying for a long time that there is no war of Muslims versus the West, at least not yet. What there is is a massive and increasing war of Muslims versus Muslims that is becoming significantly worse every week. Many analysts are pointing to the US nuclear deal with Iran as forcing Sunni Muslim governments to become more militarily aggressive (in Syria and Yemen). As we wrote last week in “19-Jul-15 World View — Behind the scenes in the Iran nuclear deal”, the Iran nuclear deal is forcing yet another realignment in the Arab world, as it deteriorates into war. Turkey’s new policies advance that trend even further. Arab News