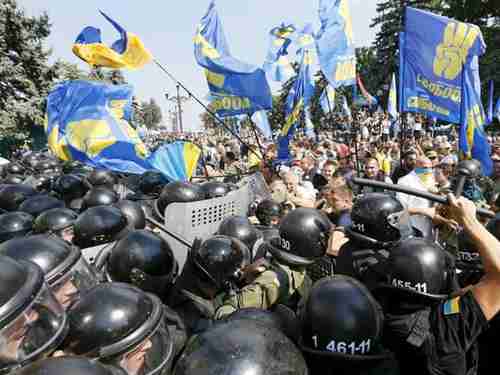 Demonstrators clash with police outside the Parliament in Kiev, Ukraine, on Monday (Reuters)

Protesters outside the parliament building in Kiev, the capital city of Ukraine, killed a national guardsman and injured near 90 other national guardsmen on Monday. The violence is blamed on a highly nationalistic political party Svoboda (“Freedom”), sometimes accused of being neo-Nazi.

The protesters are opponents of a bill discussed in the parliament. The bill would grant special autonomous status to the Donbas (East Ukraine), the region being held by ethnic Russians following last year’s Russian invasion of both Crimea and the Donbas. Russia annexed Crimea after invading it, but the Donbas has been much more problematic for Russia.

According to one legislator opposing the law, it is “a betrayal of Ukrainian national interests” by giving too much autonomy to the Russian separatists:

They get their own police, their own courts, prosecutors, taxes, they have the right to special relationships with neighboring Russian regions. So what next, will they be allowed to open their own embassies tomorrow? […]

Europe is selling us out and giving us up as it did Czechoslovakia in 1939. This is a humiliation of the national dignity of the Ukrainian nation.

The legislation to grant the Donbas special autonomous status is a central part of the so-called “Minsk agreements,” a peace agreement negotiated in Minsk, Belarus, in February.

Ukraine’s president Petro Poroshenko was opposed to the Minsk agreements because they dismember the country Ukraine even further, following the Russian invasion and annexation of Crimea.

However, France, Germany and the United States pressured Poroshenko to accept the deal in the hope that by providing Russia’s president Vladimir Putin an honorable way to back down, then he might actually do so. With Russia in severe economic trouble from plunging oil prices, Putin may be anxious to be free of the enormous expenses of supporting the Donbas separatists.

Monday’s violence suggests that there’s a long fight head to get the law passed. There is a great deal of opposition to granting the separatists so much autonomy, and Poroshenko may be unable to pull together all the votes he needs when there’s a final vote later this year.

The Russian separatists may not go along with it either. They are discussing holding elections in October under their own rules, not Ukrainian ones. This would effectively negate the Minsk agreement. Reuters and Bloomberg

Troops from Chechnya fighting on both sides in Ukraine

There are indicates that this is a conscious Moscow policy, mainly because ethnic Russians often sympathize with the Ukrainians.

According to one Moscow analyst:

Because ethnic Russians, even the most pro-Putin and most committed vatniks … in an extreme situation always find a common language and point of contact with Ukrainians. […]

There are many occasions when Russian ‘volunteers’ phone Ukrainian ‘fighters’ and say: well, guys, you’d best get away from here, we will be firing on you there.’ Such situations are not rare in the opposite direction as well.

The situation is further complicated by the fact that some Chechens are fighting on the side of Kiev. There are two battalions of about 150 Chechen fighters each on the Kiev side in Ukraine. Many of these fighters might otherwise have gone to Syria.

Russia’s military presence in and occupation of Donbas territory is much less popular among Russian-speaking Ukrainians than Putin initially predicted in 2014. However, Chechens appear to be willing to fight on either side. Paul Goble and Jamestown (13-Aug) and Washington Post