By proclamation, Zambia declared Sunday to be a “National Day of Repentance, Fasting and Prayer,” in the spirit of the “One Zambia, One Nation” motto, to pray for divine intervention to help the economy, especially to raise prices for the country’s principal export, copper.

As we wrote three weeks ago in “30-Sep-15 World View — Copper’s crashing prices cause devastating economic ripples around the world”, the collapse of copper prices in the last year has been a disaster for the African country Zambia, whose economy is heavily dependent on the price of copper. Glencore has announced plans to suspend operations in the country, which will result in the loss of thousands of jobs.

Swiss-based Glencore Plc, the world’s third-largest copper miner, announced plans to suspend operations in the country, which will result in the loss of thousands of jobs in Zambia. Zambia’s currency, the kwacha, has fallen 45% against the US dollar this year.

The copper crash is being mostly blamed on the slowdown in China’s economy, along with the continuing strengthening of the US dollar currency. Both of these trends are likely to continue.

Anxiety and distress prevail throughout the land. Indeed, hope seems to have deserted the minds of the people. It is almost as if the wise counsel of the learned among us are not a match to the crisis before us.

Bishop Simon Chihana, president of the International Fellowship of Christian Churches in Zambia, said on Sunday:

God is a god of miracles and if we ask him, he will bless us and the kwacha shall be restored to its former strength and the prices of goods shall again go down. Let’s pray to God to have mercy on us. God has done that before and he can do it again. 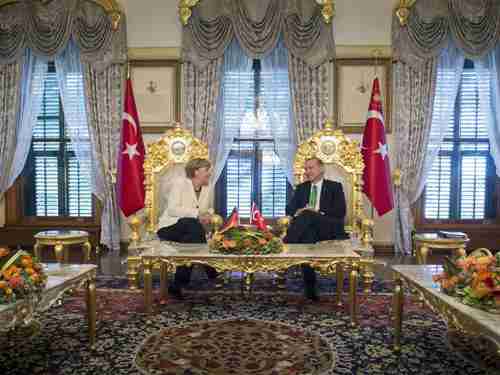 Merkel and Erdogan in Istanbul on Sunday (Getty)

How the worm has turned!!

Only weeks ago, Erdogan was almost a pariah in Europe for his attacks on a free press and for bombing Kurds. There was no talk at all of Turkey joining the European Union, though there have been 12 years of negotiations on the subject.

But now Angela Merkel and a desperate European Union realize that they need Turkey more than Turkey needs them. Turkey has been transformed from pariah to partner.

On Sunday, Merkel visited Erdogan in Istanbul, and made these requests:

In exchange, Merkel is offering:

I think we have used the crisis we are experiencing, through a very disorderly and uncontrolled movement of refugees, to achieve closer co-operation on many issues.

Our priority is to prevent illegal immigration and reduce the number of people crossing our border. In that respect we have had very fruitful negotiations with the EU.

It was all very nice and friendly but, as with all such meetings, it remains to be seen whether any of these hopes and requests will be implemented.

One Turkish diplomat said, “You can’t criticize Turkey from Monday to Friday and then on Saturday come and beg for support.”

There is plenty of opposition in both countries. Many Germans, including many in her own party, fear that the severity of the refugee crisis may oblige Merkel to make a kind of “dirty deal” with Erdogan.

Opposition politicians in Turkey are complaining that Merkel is essentially endorsing Erdogan in the elections coming in two weeks, since she’s visiting with Erdogan, but not with opposition candidates. Salmon River and Guardian (London, 21-June-2013) and Zaman (Turkey) and Independent (London) and Politico (EU)