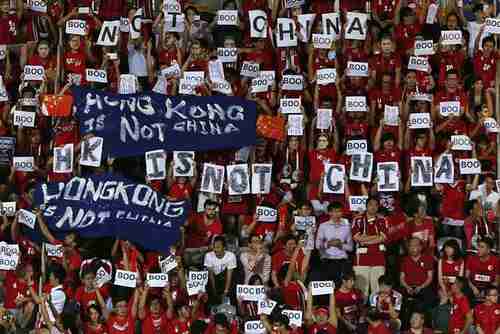 Hong Kong and China, playing in Hong Kong’s Mong Kok stadium on Tuesday, played to a 0-0 draw in a qualifying round for the FIFA Football (Soccer) World Cup to be played in Russia in 2018. But that was not the big news.

The big news was that Hong Kong fans, having been ordered by the Hong Kong Football Association not to boo the Chinese national anthem when it is played, found a way to defy the order. When China’s national anthem was played, they sat silently, but held up signs reading “BOO.” Other banners declared “Hong Kong is not China.”

The stadium is in the dense, working-class Mong Kok district of Hong Kong, which during the so-called Umbrella Revolution pro-democracy movement protests last year was the scene of violent clashes between police, demonstrators, and pro-Beijing counter-protesters. Three key city intersections were crippled for more than two months. The protests ended in a clear victory of Beijing over the Hong Kong protesters, and tensions have continued to simmer since the protests ended.

The Chinese Football Association added to the resentment when it was accused of racism for releasing a publicity poster describing Hong Kong’s players as “black-skinned, yellow-skinned and white-skinned” – a dig at the team’s contingent of naturalized foreign-born players.

The 0-0 draw was a stinging defeat for the China team, which needed a victory to avoid being eliminated from the World Cup. At best, China will now have to struggle to be among the four best runners-up. Sydney Morning Herald and WSJ Blogs

A friendly football (soccer) match between Netherlands and Germany was canceled on Tuesday, after authorities received a ‘concrete threat” of a terrorist attack during the game. There was “concrete danger for all Hannover,” and “indications” that there were “serious plans to blow something up,” according to the police.

After the stadium was evacuated, it was searched, and no bombs were found. Dutch News

Brussels, Belgium, has become the center for European terror

The neighborhood of Molenbeek in Brussels, which is both the capital city of Belgium and the capital of the European Union, has entered the world spotlight following the jihadist attack in Paris last week.

Abdelhamid Abaaoud, the suspected mastermind behind the Paris attacks, is from the Molenbeek neighborhood, and at least one of the other perpetrators came from there.

Other recent terrorist events can be traced back to the Belgian capital. Mehdi Nemmouche, who in May 2014 killed four people in the Jewish Museum in Brussels, had been staying in the suburb of Molenbeek. Early in 2015, in the Belgian town of Verviers, the Belgian police dismantled a terrorist group with links to Molenbeek. Ayoub el-Khazzani, who in August 2015 was planning to attack the Thalys train service from Amsterdam to Paris, got on the train in Brussels after staying in Molenbeek.

The perpetrators of the Charlie Hebdo attacks in Paris last January did not come from Molenbeek, but they did have links to Belgium. Police arrested 13 jihadists in Belgium and two even died in a shootout at the time.

The greater Brussels area has long been considered to be a hotbed for radical Islamists. There are several reasons why Brussels is vulnerable:

According to Noureddine Imnadine, a Moroccan-born architect:

Many of us studied hard and did well, became architects, engineers, entrepreneurs, but nobody talks about that.

Now times are different, there’s not so much work around for this younger generation, so you have these kids hanging around on the streets, feeling excluded, stigmatized, angry. We need a social framework for these kids, to get them engaged in work or in some activities to get them off the street.

Many Muslims who have become radicalized or received military training in Syria, and may even have been traumatized, are returning home from Syria without anyone checking on them whatsoever. It is a problem that is bigger in Belgium than anywhere else in Europe. Der Spiegel and Guardian (London) and PRI