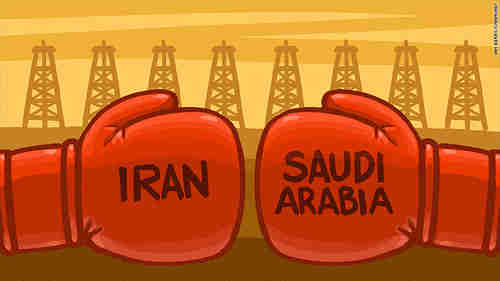 Oil prices fell over 5% on Monday, with West Texas Intermediate (WTI) prices crashing below $40 per barrel to $37.65.

The oil markets have changed substantially in the last few days, because a meeting of the Organization of the Petroleum Exporting Countries (OPEC) collapsed on Friday, without reaching any agreement on capping production levels.

Historically, OPEC members have collectively owned about two-thirds of the world’s proven petroleum reserves and account for two-fifths of world oil production. OPEC was formed in 1960 in order to gain control over oil prices by limiting the production of oil. It gained notoriety by tripling oil prices late in 1973, during and after the Yom Kippur war between Egypt and Israel, and continuing to raise prices throughout the remainder of the 1970s.

OPEC has had its ups and downs over the years, but now appears to be falling apart completely, mainly because of Iran’s nuclear deal with the west. Iran expects to the West to lift sanctions that have prevented Iran from selling oil. As a result, Iran plans to come to market with a tsunami of oil next year, which may push the price of oil down into the 20s.

Up till now, one of the main factors in the fall of oil prices has been the fracking (hydraulic fracturing) revolution in the United States, which initially created the oil glut that caused prices to decline from a high of more than $110 in June 2014.

Iran and other OPEC members wanted Saudi Arabia to boost oil prices by cutting its production. But the Saudis have been saying for a couple of years that they are going to continue full production in order to put the U.S. drillers out of business. Fracking is not profitable unless the price of oil is above $60, and the strategy has been working, as U.S. rig counts have fallen substantially.

Saudi Arabia at last week’s OPEC meeting had proposed to reduce output provided that everyone else did as well. “We cannot cut alone,” said an official. “Everyone has to contribute to that – Iran, Iraq, and the rest outside OPEC.” However, Iran and Russia rejected the plan.

With sanctions lifted, Iran expects its own oil production to surge. Iran’s oil minister said that setting production levels “is our right and anyone cannot limit us… [W]e do not expect our colleagues in OPEC to put pressure on us. … It is not acceptable, it’s not fair.”

That was the end of any hope for a deal. Now, “Everyone does whatever they want,” according to the oil minister of Iran, which plans to increase exports by a million barrels a day next year.

The huge fall in oil prices has been disastrous for the economies of oil producing countries, including Russia, Venezuela and Nigeria. As I have been writing for over ten years, Generational Dynamics predicts that the world is in a deflationary spiral, and the collapse in oil prices, and prices of other commodities, appears to be accelerating that deflationary spiral. Oil Price News and Bloomberg and CNN and CNBC

Kazakhstan may be forced to choose between Russia and Turkey

On the one hand, Kazakhstan is a member of the Russia-led Eurasian Economic Union (EEU), which also includes Belarus, Armenia and Kyrgyzstan, and of the Collective Security Treaty Organization (CSTO). Russia is Kazakhstan’s largest trade partner.

On the other hand, in the last ten years, Turkey’s businesses have invested $1.8 billion in about 1500 businesses in the Kazakhstan economy, particularly in the areas of construction, retail commerce, the processing industry and pharmaceuticals.

Kazakhstan is a Turkic country, and was one of the republics of the Soviet Union. When it collapsed in 1991, Turkey was the first country to recognize Kazakhstan’s independence.

So Kazakhstan in a difficult situation, and stands to lose from the Russia-Turkey conflict, no matter what it does.

The worst case scenario for Kazakhstan is that war breaks out, and Turkey closes the Turkish straits (Bosporus and Dardanelles channels) – the waterways that connect the Black Sea to the Mediterranean Sea – to both Russia and Kazakhstan. ( “4-Dec-15 World View — Russia and Turkey increasingly on a war footing”)

Like Turkey and Russia, Kazakhstan is one of the countries that border the Caspian Sea, and most Kazakh oil is exported to the world market through the Turkish straits, so their close would be a catastrophe. That is why Kazakhstan is trying to remain neutral between the countries, and is struggling to formulate a coherent message that refrains from offending either side. We will have to see how long that will work. Jamestown