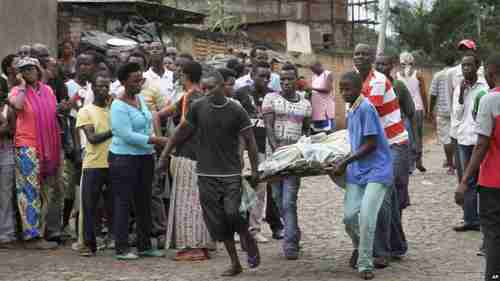 Men carry away a dead body in Bujumbura on Saturday (VOA)

Residents in several neighborhoods of Bujumbura, that capital city of Burundi, were horrified to leave their homes early Saturday morning and find dozens of corpses scattered in the streets. The military said that they had killed 79 “enemies” who had attack their army base, killing eight soldiers and policemen.

This is the worst violence in Bujumbura since two-term President Pierre Nkurunziza announced plans to seek an unconstitutional third term, and then won an election that many observers have said was rigged. Analysts say nearly 250 people have been killed since then, and that some 200,000 residents have fled to nearby countries to escape the violence.

As we wrote just three days ago ( “10-Dec-15 World View — Burundi’s Nkurunziza continues down Mugabe-Assad path of genocide”), Nkurunziza appears to be using an increasing amount of violence to stay in power illegally, and may be going down the same path as Syria’s Bashar al-Assad and Zimbabwe’s Robert Mugabe, both of whom have used massive genocidal violence to stay in power. VOA and AP

China appears on the path of building a massive military presence by means of the artificial islands it has created around the Spratly Islands in the South China Sea.

China already has one airfield, and satellite photos show work on two or three additional airstrips. Having military airbases in this region would significantly change the balance of power in the region.

The airfields would allow Chinese aircraft to refuel, repair and if necessary, rearm without having to fly the more than 1,000 kilometers (620 miles) to the nearest Chinese air base on Hainan island. On the other hand, they would also be highly vulnerable to bombing in an actual conflict.

Just as important, the airbases give China military control over the vast mineral deposits and fishing fields in the region. According to one analyst, “If we start to see satellite evidence of fuel storage going in on a large scale in the artificial islands, that will be the clearest indicator that China is planning to develop them as active air bases.” International Business Times and AP

China’s continuing rapid military expansion in the South China Sea is causing countervailing responses on the part of several countries.

The United States has been challenging China by sending surveillance planes and ships into the regions near the artificial islands. China has angrily warned that such incursions are illegal, but Secretary of Defense Ash Carter has repeatedly said that “The United States will fly, sail, and operate wherever international law allows, as we do all around the world.”

On Monday of last week, Singapore and the U.S. issued a joint statement that a P8 Poseidon spy plane would be deployed in Singapore. The move is clearly aimed at China, and is likely to anger China.

In view of critical importance of the sea lanes of communications in the South China Sea for regional energy security and trade and commerce which underpins continued peace and prosperity of the Indo-Pacific, the two Prime Ministers noting the developments in the South China Sea called upon all States to avoid unilateral actions that could lead to tensions in the region.

Modi and Abe have issued joint statements before, but this is the first time that they have explicitly mentioned the South China Sea which, once again, is going to infuriate China.

In response to a similar statement in September, China issued this statement, which describes “The Five Persistences”:

China enjoys indisputable sovereignty over the Nansha (Spratly) Islands and their adjacent waters as well as sovereign rights and jurisdiction over relevant seabed and subsoil,” the Chinese ministry of foreign affairs had told HT in a written statement…

We have always adhered to the principle of ‘Five Persistence,’ which stands for