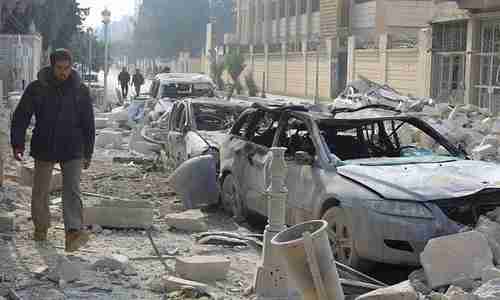 When peaceful anti-government demonstrations began in Syria in 2011, Shia/Alawite president Bashar al-Assad responded with a genocidal series of airstrikes on innocent Sunni civilians, using heavy weapons supplied by Russia. This resulted in a worldwide movement of young Sunni jihadists from almost 100 countries traveling to Syria to fight al-Assad. This resulted in the creation of the so-called Islamic State (IS or ISIS or ISIL or Daesh), which is still benefiting from a large influx of jihadist volunteers from around the world.

Now Russia is directly taking part in the war, and is substantially increasing the massacres of innocent Sunni civilians. Russia’s warplanes have added a new layer of carnage, reportedly killing at least 600 Syrian citizens, including 70 in Idlib on Sunday. In Syria’s north and in opposition-held parts of the cities of Hama and Damascus, the destruction wrought on civilian infrastructure and population centers over recently is more intense than at any point in almost five years of war.

Human Rights Watch is reporting that Russia’s massive extermination bombings have extensively used cluster bombs, whose use is considered a war crime. A cluster bomb contains dozens or hundreds of bomblets and are fired in rockets or dropped from the air. The munitions are capable of killing even long after the initial attack, especially when unexploded bomblets detonate. They are not militarily effective, but they cause many civilian casualties, including many women and children.

However, as the US has learned in Iraq and Syria and Saudi Arabia is learning in Yemen, airstrikes alone are not enough to win a war without ground troops. Now Russia is learning the same lesson, as reports indicate that Russia’s massive airstrikes are accomplishing little beyond the slaughter of innocent civilians.

When Russia began its airstrikes 12 weeks ago, Syria’s army was supposed to supply the ground troops that would make the airstrikes effective. But as we reported earlier this year, Syria’s army was nearing a complete collapse, which is one of the factors that led Russia to intervene. Syria had been losing one city after another, as massive desertions had crippled al-Assad’s army.

The al-Assad regime is now in a desperate program to conscript new people into the army. A man from Damascus is quoted as saying that four of his friends were taken from their homes to an army base in the city early last week. “There are trucks driving around with loudspeakers ordering men and boys to join,” he said.

It would not be an exaggeration to say that Syria is now in total chaos. The American-led coalition has mostly evacuated Syria since Russia intervened, but there are still many groups participating in the war: Russia, the Kurdish YPG militia, most of the important rebel groups, including radical Sunni organizations tied to Al Qaeda, such as the Nusra Front and Ahram al-Sham, Iran and Shiite Hezbollah, and ISIS. Guardian (London) and ARA News (Syria) and Debka (Israel)

European Union renews its sanctions against Russia for Ukraine invasion

Despite internal divisions among the European Union members, the European Council of all 28 EU member states renewed for six more months the sanctions against Russia that were set to expire later this month.

The sanctions had been imposed last year, after the Russians invaded and occupied east Ukraine, annexed Ukraine’s Crimea peninsula, and later shot down Malaysia Airlines Flight 17 with a missile.

Many Europeans are still shocked by Russia’s actions, because they have historical memories of European leaders appeasing Hitler and the Nazis with the Munich Pact (“peace in our time”), after Adolf Hitler’s Nazi army had invaded, occupied and annexed a portion of Austria (the Anschluss) on March 12, 1938.

There was internal dissension among EU nations over renewing sanctions, especially from Italy, which has traditionally close times with Russia, which criticized Germany for having an energy deal with Russia, while other EU countries were being asked to sacrifice their national interests. France and Bulgaria had similar objections.

The sanctions renewal comes after the end of a year in which it seemed that the EU was facing one existential crisis after another, including Greece’s financial crisis and the massive refugee crisis. AFP and Washington Post

Russia’s Foreign Ministry called the extension of EU sanctions “illogical,” and added: “Instead of building constructive cooperation in countering the key challenges of our time, such as international terrorism, EU authorities in Brussels prefer to continue to play the short-sighted sanctions game.”

Russian also then played the “short-signed sanctions game” by immediately retaliating against Ukraine and announcing a ban on imported Ukrainian food, effective January 1. Ukraine has signed a free trade agreement with the EU, set to take effect on January 1, and Russia claims that if Ukrainian food were freely allowed into Russia, then Ukrainian distributors would simply purchase EU food via the free trade agreement, and then relabel it and export it to Russia.

One reason that Ukraine is going ahead with its free trade agreement with the EU is because of what happened when the previous Ukrainian government did exactly that, late in 2013. ( “3-Dec-13 World View — Ukraine again in crisis as anti-government rioters demand president’s resignation”)

At that time, at least 100,000 anti-government protesters packed Independence Square (“the Maidan”) in Kiev on a single Sunday, demanding the resignation of then-president Viktor Yanukovich. More than 200 people were hurt when police used tear gas and flash grenades, after some marchers tried to storm a government building. Video has emerged showing police brutally beating protesters and journalists with clubs. The riots continued through the night and into Monday evening, forcing riot police to line up to protect the office of the president.

The riots were triggered when Yanukovich did a highly visible flip-flop on signing a trade agreement with the European Union, evidently because of pressure by Russia’s President Vladimir Putin. So this time, the current government is not going to do a similar flip-flop. Russia Today and BBC and Tass (Moscow) and Politico (EU)

Until Monday, Azerbaijan’s currency, the manat, pegged at a fixed rate against the US dollar. But the dollar has been getting stronger and stronger on foreign exchange (FX) markets, while the price of one of Azerbaijan’s chief exports, oil, keeps plunging to new lows. The result is that Azerbaijan has lost over half of its foreign currency reserves. A year ago, Azerbaijan had $14.9 billion US dollars, but the reserves are now at $6.2 billion, a “critical level.” Oil and gas account for 95 percent of Azeri exports and 75 percent of government revenues.

The result is that the manat currency has now fallen 32% against the dollar. This means, for example, that any imported goods denominated in U.S. dollars will be much more expensive. Something previously costing $100 will now cost $147 (=$100/(1-.32)). However, Azerbaijan’s exports are now 32% cheaper on world markets, making the country’s products more competitive.

As we wrote earlier this month in “7-Dec-15 World View — Azerbaijan faces rising radical Shia Islamist insurgency”, Azerbaijan has been facing both Shia and Sunni jihadist insurgencies, largely among population groups at the worst poverty levels. With prices of many goods now increasing by almost 50%, which is almost a “hyperinflation” rate, this currency devaluation is going to further destabilize the country.

Kazakhstan scrapped its currency peg for the tenge against the dollar in August, and Russia has devalued its ruble several times, because of the oil price plunge and the international sanctions.

What everyone is watching for is what Saudi Arabia will do. The Saudi government needs oil prices of $90 per barrel to balance its budget, and no one expects prices like that again for a long time. However, the Saudis have plenty of foreign exchange reserves, thanks to previous years of high oil prices, and would not be forced to abandon its dollar peg for four years, according to estimates. Reuters and The Street