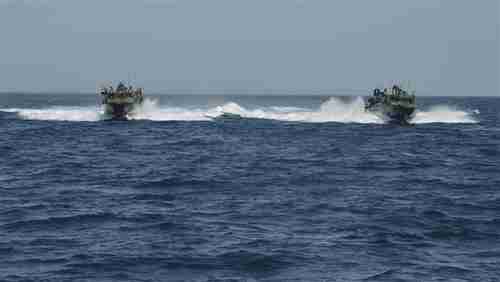 The army detained two US military ships in the Persian Gulf which were in violation of Iranian territorial waters. […]

At 16:30 Tuesday armed gunmen being carried by two US military vessels that entered the territorial waters of the Islamic Republic of Iran near Farsi Island were seized and transferred to the island. […] Those on board the American vessels included 9 men and a woman.

US Defense Department officials say that the Iranians have informed them “of the safety and well-being of our personnel. We have received assurances the sailors will promptly be allowed to continue their journey.”

As we wrote in “9-Nov-15 World View — Political crisis in Iran grows over nuclear agreement”, there are many opponents to the nuclear deal in Iran’s government, including many who would like to sabotage it. It is thought that Tuesday’s incident was timed to embarrass President Obama just before his State of the Union speech.

This was just the latest of a series of hostile incidents. Two weeks ago, Iran launched rockets that landed within 1,500 yards of the U.S. aircraft carrier USS Harry S. Truman. Iran is also holding a Washington post reporter in jail. Sepah News (Iran – Trans) and Military.com

Economists at the Royal Bank of Scotland (RBS) are predicting a sharp 2016 global recession and deflation, with stock market prices falling 10-20% by the end of the year.

The RBS report repeatedly says that this about “return of capital, not return on capital,” which means that the analysis is not about earning 3%, 4% or 5% on your investments, but is about not losing 10-20% or more on your investments. Forecasting a “cataclysmic year” and a global deflationary crisis, the report concludes:

Sell everything except high quality bonds. This is about return of capital, not return on capital. In a crowded hall, exit doors are small.

The last sentence means that when stocks start falling, everyone will try to sell, but only a few will succeed in doing so without losing a lot of money.

RBS has repeatedly warned that global finance “looks similar to 2008,” when the last major financial crisis occur, but now the outlook has become significantly more ominous in the last six weeks.

The author of the report says that global debt ratios have reached record highs and are particularly ominous, and “China has set off a major correction and it is going to snowball. Equities and credit have become very dangerous, and we have hardly even begun to retrace the ‘Goldilocks love-in’ of the last two years.”

Another ominous trend is the plunge in crude oil – down 19% so far in this year (2016) alone, and an incredible 72% plunge from crude oil’s June 2014 peak of almost $108. On Tuesday, oil prices fell below $30 per barrel for the first time since December 2013. RBS, Morgan Stanley, Standard Charter and Barclays have all recently predicted that oil will fall below $20 per barrel, perhaps below $10 per barrel.

Commodities in general have been plummeting, a sign of weakening global economies, especially in China and emerging markets. The RBS points out that in the last six weeks alone, copper has fallen 1.5%, coal down 6.2%, wheat down 3.5%, corn down 4.1%, soybeans up 0.3%. The Baltic Dry index, a measure of international commodities shipments, has fallen 16%.

One more forecast mentioned in the RBS report: “Automation on its way to destroy 30-50% of all jobs in developed world.” That indicates something much worse than a 10-20% recession.

As regular readers know, Generational Dynamics predicts that we are headed for a global financial panic and crisis. According to Friday’s Wall Street Journal, the S&P 500 Price/Earnings index (stock valuations index) on Friday morning (January 8) was at an astronomically high 21.08. This is a bit smaller than it has been in a while, but still far above the historical average of 14, indicating that the stock market is in a huge bubble that could burst at any time. Generational Dynamics predicts that the P/E ratio will fall to the 5-6 range or lower, which is where it was as recently as 1982, resulting in a Dow Jones Industrial Average of 3000 or lower. Royal Bank of Scotland (PDF) and Guardian (London) and Telegraph (London) and CNN

A suicide bombing killed at least 10 foreign nations, most of them Germans, and wounded 15 others, blowing himself up at a major tourist spot in Istanbul on Tuesday. The explosion occurred near Hagia Sophia, which was originally a Greek Orthodox cathedral, the largest cathedral in the world, until the fall of Constantinople to the Muslim Ottomans in 1453. After that it was converted to a mosque, and later to a museum, and is now Istanbul’s biggest tourist attraction.

The perpetrator was 28-year-old Nabil Fadli, of Syrian origin, born in Saudi Arabia in 1988. He has been identified as a member of the so-called Islamic State (IS or ISIS or ISIL or Daesh).

There have been three major ISIS terrorist acts in the last seven months. ISIS was blamed for a bomb that killed four people at a Peoples’ Democratic Party (HDP) rally in the southeastern province of Diyarbakir on June 5, 2015. An ISIS militant also killed 33 socialist activists on July 20, 2015, at the Amara Cultural Center in the southeastern district of Suruç. Two ISIS militants then killed at least 100 people attending a peace rally in Ankara on Oct. 10, 2015, in the deadliest attack in the country’s history. Hurriyet Daily News (Istanbul)