Japan announces negative interest rates as an act of desperation 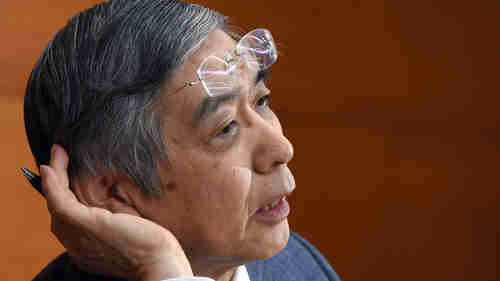 In a move widely viewed as an act of desperation, the Bank of Japan on Friday surprised economists by announcing that it will reduce a key interest rate to a negative value, -0.1%. This means that if a Japanese bank wants to “park” its excess reserve cash in the Bank of Japan, then the bank will have to pay the BOJ to do so. It also means that if a bank wants to borrow cash from the BOJ, then the BOJ will pay the bank to do so. It’s an upside-down world. Unfortunately, the BOJ will not lend money to ordinary people.

According to the BOJ statement:

Many economists were shocked because Bank of Japan Governor Haruhiko Kuroda had insisted only last week that the BOJ would not adopt any new monetary easing policies, especially negative interest rates. The purpose of the “three-tier system” is to reduce the amount of shock, at least at first. This may be temporary because the statement also says, “It will cut the interest rate further into negative territory if judged as necessary.”

In addition, the Bank of Japan is continuing its “quantitative easing” (QE) program, and will continue to buy up government bonds worth 80 trillion yen ($660 billion) every year, adding that money to the economy.

The latest data on the Japanese economy shows the reason for the desperation. Household spending in December fell 4.4% from a year ago, and monthly industrial production contracted 1.4%. Official data shows that Japan’s inflation rate was just 0.5% in 2015, and appears to be falling. Like most central banks, the BOJ has a target inflation rate of 2%, and that target seems far out of reach. Three months ago, the BOJ projected a 2016 inflation rate of 1.4%, but now has had to lower that projection to 0.8%. CNBC and Bank of Japan (PDF) and Market Watch

Negative interest rates are supposed to improve the economy

The logic behind the negative interest rate is that if a bank has too much money sitting in its reserve accounts, then instead of depositing it in the central bank, they might lend it out to businesses, who will then use it to hire people, pushing up wages, putting more money in people’s pockets that they’ll spend, pushing up inflation.

Unfortunately, that has not worked too well in other countries. In mid-2012, Denmark went to negative interest rates. In 2014, the European Central Bank (ECB) and Swiss National Bank (SNB) moved into negative territory and Sweden did the same in early 2015.

In fact, if you add together the GDPs of all the economies whose central banks have negative interest rates, then they add up to 23.1%. In other words, almost 1/4 of the world, measured by GDP, are economies where the central bank pays someone to take their money.

At the same time, the ECB and BOJ also have large “quantitative easing” programs, pumping money into banks by buying any bonds that are available.

So all this money is pouring out of the central banks into the regional banks, but there’s little or no inflation, and certainly no hyperinflation. That’s because the cash is just being hoarded by the banks and other financial institutions, for fear of a repeat of the 2007-2008 financial crisis. And if the money isn’t being spent, and isn’t being used to hire people, then it’s as if the money weren’t available at all. WSJ Blogs and Reuters and Market Watch

The growth in the Gross Domestic Product (GDP) of the US economy slowed markedly in the fourth quarter of last year. The economy expanded at a rate of 0.7%, a big drop from 2% in the third quarter, and 3.9% in the second quarter.

The reason that banks and consumers are hoarding cash is related to the velocity of money, which is discussed below, and which mainstream economists are apparently totally oblivious to. Market Watch and Guardian (London)

Mainstream economists are oblivious to the velocity of money

Mainstream economists (including those in the so-called “Austrian school”) think that inflation is determined by the amount of money in circulation as set by monetary policy — interest rates and quantitative easing. And you can find thousands of articles in the past decade explaining why continued low interest rates would cause inflation.

But anyone who has taken Economics 1.01 knows that inflation is caused by two factors: the amount of money in circulation times the velocity of money. You can google “velocity of money” for a full explanation, but it represents how frequently money is actually used to buy things or pay wages.

The above graph shows that the velocity of money has plummeted three times in the last century: during the Great Depression of the 1930s, following World War II in the 1940s, and during the financial crisis of the 2000s.

It is pretty clear that Bernanke does not understand the velocity of money, or thinks that hoarding money is being caused by low interest rates. The causation goes in the opposite direction. Since 2007, the velocity of money has been decreasing, meaning that people are hoarding their money more, not spending it. This is causing a deflationary spiral, and forcing the Fed to lower interest rates. As the deflationary spiral worsens, the Fed in desperation will resort to negative interest rates, as has happened in Japan.