International Planned Parenthood Federation in the Western Hemisphere region (IPPF/WHR) is seemingly taking advantage of the Zika outbreak in the Americas, the hardest hit region by the mosquito-borne virus, to ask for donations to expand access to abortions and birth control.

As of 6 p.m. (ET) on Monday, IPPF/WHR was featuring a picture on its official webpage of a mosquito with the words, “Emergency: Zika virus is Spreading” superimposed over the image and a link to page, titled “Zika Virus: Make Your Emergency Gift,” that asks for preset donations of $50 to $500, with the option of giving any amount. 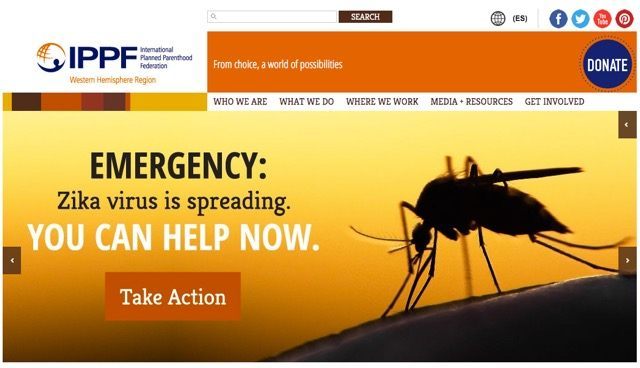 “In a region where many women have limited or no access to birth control and 6 countries ban abortion under all circumstances, the stakes are high,” states Western Hemisphere branch of the U.K.-based IPPF on its Zika donations webpage. “Advocates and health providers are concerned women might turn to life-threatening back-alley abortion procedures out of desperation to avoid the devastating birth defects associated with the virus.”

“Make your emergency gift today to help IPPF/WHR and our local partners empower women with the family planning resources and quality, non-judgmental care they need to make empowered, informed choices during this crisis,” it adds.

IPPF/WHR refused to respond to Breitbart News’s requests for comment.

IPPF/WHR has been promoting the expansion of abortions and contraception as a “comprehensive approach” to combat the Zika virus. The U.S. Centers for Disease Control and Prevention reports that active Zika transmissions have spread to 30 countries and territories, the majority of which are in Latin America and the Caribbean.

Transmission of the Zika virus through sexual contact has been confirmed in the United States. 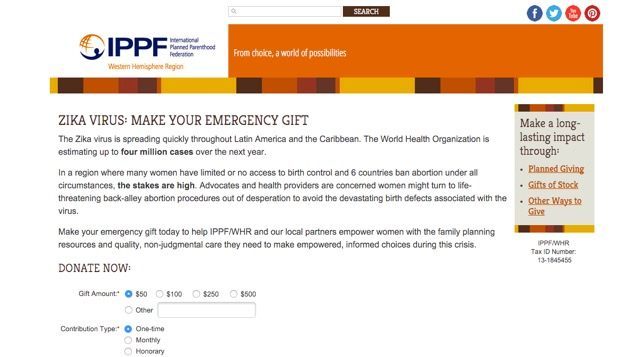 Advice from governments, including Colombia, El Salvador, and Ecuador, for women to delay pregnancies because of the Zika link to microcephaly — a neurological disorder that causes babies to be born with abnormally small heads and developmental problems — is unreasonable, argues IPPF/WHR.

“In a region where approximately half of pregnancies are unplanned, and where sexual assault is prevalent, recommendations by governments to delay pregnancies is [sic] not reasonable—asking women to avoid pregnancy without expanding access to contraception, education, and safe abortion services where legal is not sound public health policy,” says the organization in a blog post featured on its official website.

“It is essential to recognize that women have the right to make decisions about if and when they have children,” it adds. “However, throughout Latin America and the Caribbean, many women and young people are unable to exercise this right.”

IPPF/WHR acknowledges the Latin American and Caribbean region has some of the most restrictive abortion laws in the world.

Nevertheless, it promotes abortion as part of its comprehensive approach to combating the virus.

“In response to the Zika outbreak, IPPF/WHR will build on its network of clinics and community and mobile health programs to increase access to contraceptives and broaden public awareness about the virus,” it adds. “This work will be carried out in close collaboration with national governments and other health providers to ensure maximum impact and avoid duplication of efforts. In addition, we will also focus on increasing access to legal and safe abortion throughout the region.”

IPPF/WHR claims it is concerned that health authorities in the region fear many women may resort to illegal abortion procedures that threaten their lives.

According to its most recent financial statement, the organization spent nearly $5 million on abortion-related expenses in 2014, described as “activities to eliminate unsafe abortion, to ensure the universal recognition of a woman’s right to choose, and to have access to safe abortion.”

That means that nearly 20 percent of its total expenditures (about $26 million) was devoted to abortion-related activities.

During his first week in office, President Obama overturned the Mexico City Policy, which prohibited U.S. funding for groups, such as IPPF, that promote or perform abortions overseas. IPPF also receives funding from the United Nations, which receives U.S. taxpayer money.

The group says it is funded through a mix of donations from individuals, corporations, governments, and NGOs, in addition to other sources.