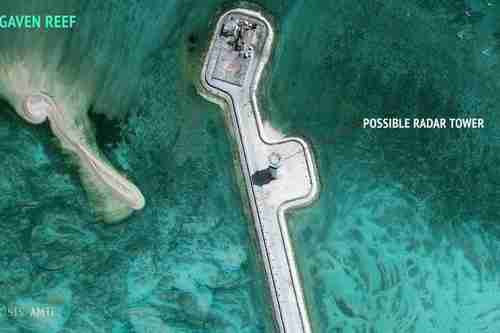 U.S. Navy and Marine Corps leaders have warned that China’s rapid military buildup in the Pacific Ocean could force the United States to move ships and forces in response.

China’s advances might require the United States to reassess its attack submarine fleet. The Navy has said for years that 48 attack submarines is what it needs to carry out its mission, but that may no longer be enough. According to Chief of Naval Operations Adm. John Richardson, “That number is really based on analysis from 2006,” but with China’s recent developments, “that’s becoming a more urgent situation.” The Navy already wants to have 60 percent of its planned fleet of 308 US warships committed to the Pacific by 2020.

Adm. Harry Harris addressed these concerns in testimony to Congress:

“Short of war, I’m aware of the threat. I’ll pay attention to the threat, But that is not going to prevent us from flying, sailing or operating wherever international law allows.

In an article entitled “Trump-Effect: Fox News Channel’s Brand Takes 50% Hit Among Republicans, Breitbart journalism reporter John Nolte says that the Fox News Channel (FNC) “pro-Rubio/GOP Establishment bias” is as manipulative and dishonest as the mainstream media’s left-wing bias, and that Republican are losing respect for FNC. According to Nolte:

My job is to monitor the mainstream media, which is something that eats up about 14 hours of a day that begins at 6 a.m. when the cable morning shows begin. Lying next to me, my good sport of a wife suffers through about an hour of ‘Morning Joe,’ whatever they call that left-wing garbage fire on CNN, and the rest. Out of habit, before I head to my desk, without really asking I always ask, ‘You want me to put it on Fox?’ […]

When I asked my wife why she is ‘done’ with Fox News, her answer was simply, ‘They’re just like all the rest.’

In fact, CNN’s president Jeff Zucker claims that it is rapidly closing the gap with FNC, and hopes to surpass it.

But there are very good reasons why it will be impossible for FNC to lose its leadership position anytime in the foreseeable future. An analysis by Ad Week shows that Jeff Zucker is, if not lying, at least shading the truth by “blending ratings” in a way that doesn’t make sense.

According to another media analysis at TheWrap:

Last weekend marked 20 years since Fox News Channel’s launch was announced, and CEO and Chairman Roger Ailes is probably quite pleased with the network’s anniversary numbers.

Fox News has now been the No. 1 cable news network for 14 consecutive years after winning the month of January with a dominating performance that included last week’s GOP debate. Fox News’ streak began in Jan. 2002 when it surpassed CNN for the first time.

Ailes’ network beat CNN and MSNBC combined in total day viewers and had the top 14 individual programs in cable news among the key 25-54 age demo. ‘The O’Reilly Factor’ had its best month since November 2012 and finished as the No. 1 program in cable news, despite double-digit growth from ‘The Kelly File.’

The reasons why FNC cannot be beaten are based on demographics. Consider the following:

I’ve been following this issue off and on for over ten years, and except for an occasional blip it’s always been the case that the number of FNC viewers was about equal to the sum of the numbers of viewers of all the other cable news stations combined. That makes perfect sense. FNC gets 50% of the audience, while all the other stations compete for the other 50%.

I watch all of these stations, on the left and on the right, and there’s no question that FNC is much less biased than the others. Why? Because they don’t need to be biased.

If CNN started becoming more balanced, say, broadcasting more news critical of the Obama administration, then CNN would lose part of its audience to MSNBC, and vice-versa. But FNC can broadcast a balance of left-wing and right-wing opinions because their viewers have no place else to go. Even if a Republican president takes office in January, FNC can still broadcast some news critical of the president, knowing that all the other stations will be vitriolicly attacking him.

The Trump situation has presented a novel problem for FNC, because it’s caused a split among its viewers. The mainstream media stations have no such problem, because they’re uniformly against Trump, and they have an opportunity to grab viewers away among people like Nolte’s wife, who see FNC as becoming as biased as all the others.

But that bias is only temporary. The Trump situation is going to be resolved in a few weeks, one way or another, and then I expect all the right-wing viewers to go back to FNC, and the left-wing viewers to be divided once again among the hash of left-wing mainstream media news stations. Breitbart BigJournalism and Advertising Week and The Wrap

Al-Jazeera America to go off the air on April 14

Qatar-based al-Jazeera America permanently shut down its web site on Friday, and will go off the air on April 14.

Al-Jazeera began as an Arabic news channel in 1996 targeting 370 million Arabic-speaking viewers. In 2006, the company launched Al-Jazeera English, an English language broadcast, targeting the rest of the world, and available as an internet stream. I started watching it almost as soon as it was available because it had the best coverage of Mideast news, and I needed this kind of “inside baseball” understanding of Mideast issues in order to do Generational Dynamics analyses.

Is Al-Jazeera biased? Of course it is. But it’s no more biased than the New York Times or NBC News. The BBC was vitriolicly anti-American during the George Bush presidency, but now they’re totally in the tank for President Obama.

In August 2013, Al-Jazeera America (AJAM) debuted as a cable television network. They got immediate cable network buy-ins by paying $500 million to Al Gore for his defunct Current TV cable channel. That was a total waste of money that probably doomed AJAM from the start.

I had been looking forward to AJAM, but I was very disappointed when it came on the air. It was practically indistinguishable from CNN and MSNBC and the other left-wing channels. It even had the same formats — a morning breakfast show, bland news shows during the day, and an evening newscast. Furthermore, it was frustrating, because they blocked the Al-Jazeera English internet stream to the United States so that it couldn’t compete. I thought it was crazy. Why would anyone watch AJAM, when they could get exactly the same news on the mainstream news channels?

The only time that AJAM was worth watching was for two hours per day, when they broadcast the al-Jazeera English newshour. I made sure to record those shows, because they contained valuable information that I needed. However, even that was frustrating whenever some event occurred in Washington, and AJAM switched to it, just as CNN, MSNBC, FNC, and all the others switched to it. As I said, I thought that was crazy.

As time went on, AJAM got better and better because they had low ratings and had to cut many of the bland news shows, broadcasting al-Jazeera English programming instead.

AJAM does claim that it had the best quality American journalism and documentaries, and in many ways they are right. But no matter how good they were as journalism, their news programs still all had the same left-wing slant as all the other mainstream channels.