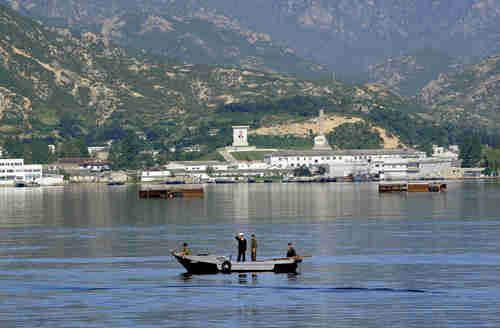 North Korea says it will liquidate all South Korean assets in joint projects that have served over the years the dual purpose of, first, providing foreign currency to North Korea, and second, providing “hope” that the two countries would not restart the 1950s Korean War between the North and the South, which officially is still ongoing but ended in an armistice (armed truce) in 1953.

This announcement came after North Korea fired two short-range ballistic missiles into the sea on Thursday in defiance of U.N. Security Council resolutions. In a hard-hitting response, UN Secretary-General Ban Ki-moon announced that he was “gravely concerned,” and he called on North Korea to “cease destabilizing acts.”

Following the nuclear test, the United States, South Korea and China have all agreed to impose sanctions on North Korea. These have particularly required that all goods sent from other countries to North Korea be subject to inspection, a requirement that even China has been complying with.

North Korea has responded with almost daily threats of war, including the threat to destroy South Korean capital city Seoul, and has fired short-range ballistic missiles into the ocean several times.

Thursday’s announcement marks further deterioration in the relationship of the North and South. The North Koreans have announced that all economic agreements between North and South will now be invalid, and that South Korean assets in the North will be liquidated.

The principal effect will be to the Kaesong Industrial Complex, which is a major source of foreign exchange to North Korea.

Kaesong Industrial Complex was built in North Korea in 2004 as a joint venture between the North and South, and was considered a symbol of peaceful cooperation, with over 100 South Korean companies working there, employing some 53,000 North Korean workers. In April 2013, the North Koreans suddenly withdrew their workers from the project, effectively shutting the complex down. Kaesong was a major source of hard currency for the North Koreans, tens of millions of dollars per year, so it was not surprising that the complex reopened in September of that year. After international sanctions were imposed in January following the nuclear test, North Korea announced that it was limiting entry to the Kaesong complex, once again shutting it down. According to Thursday’s announcement all the South Korean assets will be seized and liquidated, representing several hundred million dollars worth of investment by South Korean companies.

Also affected is the Mount Kumgang resort, another joint project, a mountain resort set up mainly for South Korean tourists to visit the North. It has been closed since 2008, but was occasionally used for reunions of families that were split by the 1950s war. Thursday’s announcement effectively brings an end to all economic cooperation between the two Koreas, and any hope of further family reunions.

It is hard to know what to make of all this. North Korea’s child dictator Kim Jong-un is a total loon who has practiced this kind of brinksmanship before with no serious consequences. Still, in this generational Crisis era, it is quite possible that Kim and his advisors might fantasize that if they start a war, then they will end up governing both the North and South. Unfortunately, this kind of insanity is not uncommon throughout history, and always leads to disaster. Reuters and AP (20-Oct-2015)

The European Central Bank (ECB), facing a continuing deflationary spiral that it has not been continually unable to control, announced what is being described as a “bazooka,” an attempt to flood the banking system with huge new amounts of “printed” money, in an attempt to reverse the deflationary spiral, and raise the inflation rate to the target rate of 2%.

ECB President Mario Draghi on Thursday made several dramatic announcements. One set of announcement had to do with lowering interest rates:

Lower interest rates usually target only banks, so there was another set of announcements having to do with quantitative easing (QE). QE targets other institutions besides banks, by purchasing bonds issued by those entities, so that the entities can use the money for hiring or purchases or investment or construction. Draghi’s announcements were:

While very low or even negative inflation rates are unavoidable over the next few months, as a result of movements in oil prices, it is crucial to avoid second-round effects by securing the return of inflation to levels below, but close to, 2% without undue delay. […]

The risks to the euro area growth outlook remain tilted to the downside. They relate in particular to the heightened uncertainties regarding developments in the global economy, as well as to broader geopolitical risks.

A typical analyst quote I heard was, “Draghi must think that the economy is in very serious trouble to have made this announcement.”

In “normal” times, the ECB might announce a change in one interest rate or one QE policy. The fact that Draghi announced reductions in its three key interest rates PLUS an expansion of the quantitative easing program PLUS the inclusion of corporate bonds in the QE program was view as a move of desperation. And indeed, with the euro in a continuing deflationary spiral, the desperation may well be justified. Market Watch and Reuters and Business Insider

ECB tries to target the velocity of money

Most people, including most economists, believe that the inflation rate is determined solely by the amount of money in circulation. But in fact the inflation rate is determined by two factors: the amount of money in circulation and the velocity of money. You can google “velocity of money” for a full explanation, but it represents how frequently money is actually used to buy things or pay wages.

If a bank lends out a billion dollars, and people just store that money in their matresses or bank accounts, then there won’t be any inflation. Money has to be used and reused to generate inflation.

The amount of money in circulation is determined by the central bank. The velocity of money depends on the moods and behaviors of the entire population, and in fact it’s a generational variable, in that it varies predictably with the generational cycle.

The above graph shows that the velocity of money has plummeted three times in the last century: During the Great Depression of the 1930s, following World War II in the 1940s, and during the financial crisis of the 2000s.

Thursday’s “bazooka” ECB announcement is attempting to change history by pouring so many trillions of euros into the economy that the liquidity will somehow overcome the generational trend in the velocity of money. But it’s hard to see how that will change the behaviors and moods of entire generations of people. It’s just as likely that people will see the ECB as panicking, and become even more reluctant to spend what little money they have.

Indeed, last week the Bank of International Settlements (BIS) issued a warning that negative interest rates will suffer from the law of diminishing returns, and reach a “tipping point” where they’re no longer effective. Many analysts are alarmed by the use of negative interests rates because banks and other financial institutions depend on higher interest rates to make money. Thus lower interest rates undercut the entire business model of financial institutions and introduce instability into the banking systems. There have already been signs of a selloff in bank stocks.

Negative interest rates have been set in central banks in Denmark, the eurozone, Sweden, Switzerland and Japan. These moves have had the effect of weakening these currencies internationally, making these countries more competitive internationally, and at the same time strengthening the US dollar, making the US less competitive. There is some fear that the world is on the verge of a “currency war,” where a currency devaluation by one country is countered by currency devaluations in other countries, in a tit-for-tat downward spiral.

One thing is certain: The velocity of money has continued to plummet, and there are no signs that this trend will be reversed. As I’ve been writing for years, Generational Dynamics predicts that the world is headed for a global financial crisis and stock market panic and crash. Thursday’s ECB announcement pushes the financial system one step closer in that direction. Sydney Morning Herald and CNBC and Bank of International Settlements (BIS)