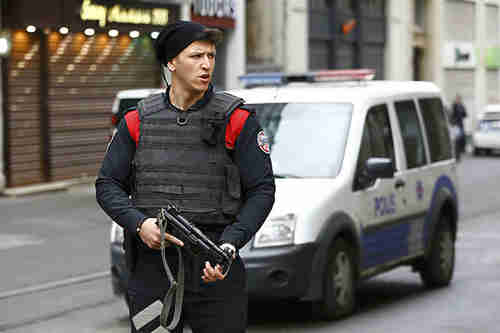 Five people were killed and 39 others were injured in a suicide bomb attack on Saturday in the heart of the business district in Istanbul, Turkey. Among those killed were foreign nationals: three Israeli citizens and one Iranian.

This is only the latest in a series of major terrorist attacks in Turkey’s cities in the last few months.

There was a suicide car bombing in Ankara last Sunday that killed 37 people, and another one in Ankara on February 17, killing 30 people. Both of those attacks were claimed by the Kurdistan Freedom Falcons (TAK), a splinter group from the separatist Kurdistan Workers’ Party (PKK), which has been engaged in violence with the Turkish government for three decades.

On October 10 of last year, there was a massive terror attack at a “peace rally” in Ankara that killed 103 people. It was referred to as the worst terrorist massacre in Turkey’s history, or as “Turkey’s 9/11.” In that case, the attack was blamed on the so-called Islamic State (IS or ISIS or ISIL or Daesh). ( “13-Oct-15 World View — Turkey is seen as increasingly unstable after Ankara massacre”)

So either TAK or ISIS may be responsible for Saturday’s attack in Istanbul, though neither has yet claimed responsibility.

However, Turkish authorities suspect that the suicide bomber was Savas Yildis, a 33-year-old terrorist. Authorities have detained Yildis’ father and obtained a blood sample in order to verify that Yildis was among those killed in the bombing. Yildis was a suspected ISIS member and is suspected of involvement in two previous attacks in Turkey last year, in the cities of Mersin and Adana. Hurriyet (Turkey) and Times of Israel and Daily Mail (London)

Because three Israelis were killed in the attack, the investigation will attempt to determine whether Israelis were specifically targeted. The Israelis were reportedly part of a group of 14 Israeli tourists on a culinary tour.

Saturday’s attack was clearly targeting tourists. If the PKK/TAK was responsible, it would represent a change in tactics. In the past, PKK violence has attacked military targets, so civilian targets are a new tactic. The TAK have warned foreigners about supporting the country’s tourism industry, which the group says feeds the Erdogan regime.

In December, Israel and Turkey reached an agreement to normalize diplomatic relations between the two countries. Turkey broke off diplomatic relations with Israel after the deaths of nine Turkish citizens on May 31, 2010, in a confrontation between Israel’s navy and the boat Mavi Marmara in a flotilla headed for Gaza in violation of Israel’s Gaza blockade. Since then, president Recep Tayyip Erdogan has specified three conditions that Israel would have to fulfill, in order to restore normal relations: Israel would have to apologize, pay monetary compensation to the families of the victims, and lift the blockade of Gaza. December’s agreement mentioned only the first two of these three conditions.

The Mavi Marmara incident was a major news story for a long time in 2010, but now with a thousands of people being killed every day in Syria, with millions of Syrian refugees in Turkey attempting to reach Europe, and with hundreds of Turkish citizens being killed in a series of terrorist attacks by the PKK/TAK and ISIS, the Mavi Marmara incident is but a footnote to the events of the 2010s decade.

In the last year, Turkish resorts have become a popular destination for Israeli tourists, especially during the spring vacation. This is especially true now, after the shootdown by Turkey of a Russian warplane on November 25 of last year, sharply reducing the number of Russian tourists visiting Turkey. International Business Times and CS Monitor and Debka and Foreign Policy