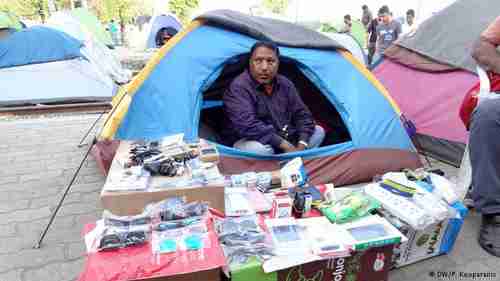 An Idomeni camp refugee selling whatever he can (Deutsche Welle)

A scene described as “horrific” unfolded on Sunday in Greece along the border with Macedonia. According to reports, five refugees from the Idomeni refugee camp went to the border to negotiate with Macedonian authorities. Thousands of people had come to the Macedonian border because of rumors that the borders were going to be opened.

The Macedonians said that they were following European policy, and asked the refugees to remain peaceful. One of the refugees is quoted as saying:

We understand, and we want to be peaceful. But behind me there are 10,000 people – refugees who are fleeing war – and they have been here for months now. We want a solution.

Ten minutes later, hundreds of refugees tried to cut the barbed wire and break through the fence. The police responded by firing teargas canisters, stun grenades, and rubber bullets at hundreds of refugees, and kept firing for two hours. The teargas canisters went deep into the Idomeni camp and reached women and children who were not taking part in any protests. The refugees hurled stones at the Macedonian police in retaliation.

There were hundreds of injuries, according to Doctors without Borders, including two hundred with breathing problems, and 30 for wounds caused by plastic bullets.

Problems are mounting for the EU-Turkey migrant deal, including the following:

Azerbaijan media reports that the Armenians broke the ceasefire 125 times throughout the day on Saturday, at various location in Nagorno-Karabakh (NKB). It also reports that “Azerbaijani armed forces carried out 125 strikes on enemy positions,” although those strikes are not characterized as “breaches.”

Armenian media said that the cease-fire was “mainly observed,” but complained that Azerbaijani forces used “an 82-mm mortar and a 122-mm D-30 howitzer” in norther NKB.

This is the way that the NKB conflict has been going for years, with low-level violence characterized by sporadic mortars and gunfire on both sides, and with both sides reporting breaches, often hundreds per day.

This all changed on April 1, when suddenly the low-level violence escalated into what appeared to be a major war. ( “3-Apr-16 World View — Armenia-Azerbaijan escalating conflict in Nagorno-Karabakh threatens the entire region”) A Russian-mediated cease-fire came into effect last week on April 4, and it has mostly held since then.

Russia’s prime minister Dmitry Medvedev has been openly critical of the “Turkish factor” in the NKB conflict:

There is a host of forces that are closely looking into the consequences of the Nagorno-Karabakh conflict for the situation in the Middle East and on Russia. … All conflicts at a given time may in one way or another be a factor in political decisions. So I do not rule out that there are factors that are influencing the conflict from abroad. You mentioned the Turkish factor. The Turkish factor probably exists, at least because Turkey has expressed its position.

In fact, Russia has been criticized internationally for selling weapons to both sides in the conflict, something that Medvedev defends: “If we imagine for a minute that Russian Federation gives up this role, we perfectly understand that this place won’t remain empty. They will buy weapons in other countries, and the degree of their deadliness won’t change in any way.”

My own view of Russia’s motivations is that Russia’s president Vladimir Putin fears blowback from a major Armenia-Azerbaijan war. The South Caucasus region is the site of centuries of some of the bloodiest religious wars in history between the Orthodox Christian civilization and the Sunni Muslim civilization, and Generational Dynamics predicts that the region is headed for another such war with absolute certainty. I doubt that Putin has ever heard of Generational Dynamics, but he knows the region’s history and he knows intuitively that that any South Caucasus war could spiral throughout the Middle East or Russia, as suggested by Medvedev’s statement quoted above. For that reason, Russia is attempting to remain neutral for the time being, rather than risk another extremely bloody war throughout the region, a war that would lead to a world war. However, there are massive generational and historical forces at work here, and no politician either cause or prevent the war that’s coming. AzerTag (Azerbaijan) and Pan Armenian and Sputnik News (Moscow)