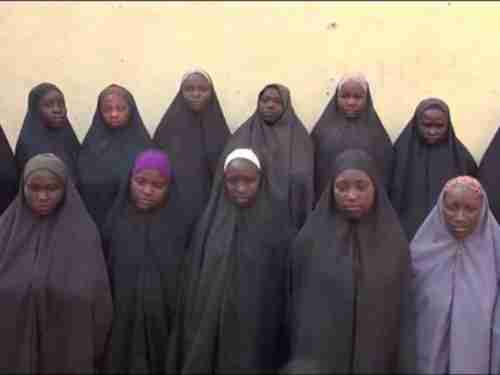 Screen grab from Boko Haram video. I think that this is the saddest picture that I’ve ever posted. (CNN)

This is the two-year anniversary of the abduction by Boko Haram of 276 girls from their college dormitory in the village of Chibok in Nigeria. Boko Haram has now released a video of 15 of the girls, shot on Christmas day 2015. The video provides “proof of life” in order for Boko Haram to gain negotiating leverage in its extortion negotiations with the government.

Parents who viewed the video confirmed that they were the Chibok girls. Those who saw their own daughters were relieved that their daughters were alive, but distressed at the circumstances.

It is unlikely that all 276 girls could ever be returned, as it is thought that some have been sold as slaves and others have been used as suicide bombers.

But most of all, the video has caused renewed outrage in Nigeria at the way the government responded to the abduction. For a couple of weeks after the abduction occurred, it seemed that nobody particularly cared, not the government of Nigeria, and not the international community. (See “2-May-14 World View — New car bombing in Nigeria, while 200 kidnapped girls are still missing”) Then an international campaign began, with Michelle Obama’s participation. But now, two years later, no girls have been recovered, and some people in Nigeria have stated in the past that Nigeria’s government was so incompetent at dealing with Boko Haram that it is possible that some government officials are Boko Haram supporters. Other analysts claim that any attempt to rescue the girls could have gotten many of them killed. CNN and AFP

As we reported yesterday, Russian jet fighters pretended to be attacking the USS Donald Cook in the Baltic Sea, buzzing the USS Cook 11 times, at one point within 30 feet of the ship.

According to Secretary of State John Kerry, the US might have shot the Russian jets down:

We condemn this kind of behavior. It is reckless. It is provocative. It is dangerous. And under the rules of engagement that could have been a shoot-down.

People need to understand that this is serious business and the United States is not going to be intimidated on the high seas… We are communicating to the Russians how dangerous this is and our hope is that this will never be repeated.

Everyone remembers that Turkey last year shot down a Russian jet under almost similar circumstances, and since then Russian jets no longer violate Turkey’s airspace.

In this case, however, Russia’s state media bragged about the incident:

The aerobatics skills of Russian pilots over the US destroyer Donald Cook in the Baltic Sea left the Pentagon and other US official running for cover in Washington over “aggressive close interactions” with Russian fighter jets. …

Judging by the videos released by the US Navy, the sailors were nonplussed by the Russian aerobatic skills. They gathered on the top deck of the destroyer to watch the Russian pilots…

At least on the video no one can be seen running for cover.

The Russians should remember a previous incident: an April 2001 encounter, when the pilots of a Chinese F-8 interceptor were playing games and exhibiting similar “aerobatics skills” to harass a U.S. surveillance aircraft in international waters in the South China Sea. The Chinese were internationally humiliated as total idiots when the Chinese aircraft smashed into the US aircraft. The Chinese aircraft crashed into the sea, and its crew were killed. The U.S. plane made an emergency landing on China’s Hainan Island, and the idiot Chinese got even by imprisoning the 24 crew members for 10 days. Guardian (London) and Russia Today

The United States on Thursday revealed for the first time that American ships have started conducting joint patrols with the Philippines in the South China Sea. At the same time, Defense Secretary Ash Carter announced that the US will be keeping nearly 300 troops, including Air Force commandos armed with combat aircraft and helicopters, in the Philippines through the end of the month. Philippines Defense Minister Voltaire T. Gazmin said wishfully that the U.S. presence “will deter uncalled-for actions by the Chinese.”

This is part of the continuing military buildup in the South China Sea, triggered by China’s use of its massive military force to confiscate regions that have historically belonged to other nations, especially Vietnam and the Philippines. As we reported yesterday, Japanese warships are visiting ports in Vietnam, while China is deploying warplanes onto Woody Island in the South China Sea. NBC News and CNN