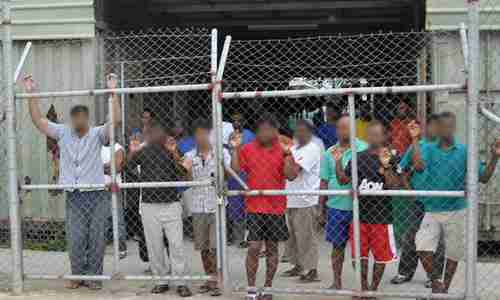 In past years, thousands of refugees from Asia have traveled by boat to Australia, often after paying huge sums to human traffickers, hoping to resettle there. Australia has dealt with the situation, starting in 2001, by setting up two “detention centers,” one on PNG’s Manus Island and one on Nauru, under agreements reached with both countries. Australia intercepts the boat people while at sea, and redirects them to the detention centers.

There is not yet any timetable for the closing of the Manus Island center, but Australia is just weeks away from a national election. The entire policy for processing refugees and asylum seekers is now in chaos and is sure to be a major campaign issue.

Lawyers for 850 asylum seekers held at Manus Island said on Friday they planned to seek potentially billions of Australian dollars in compensation. Sydney Morning Herald and Guardian (London) and Reuters

According to a 2013 memorandum of understanding (MOU) between Australia and PNG:

8. Australia may Transfer and Papua New Guinea will accept Transferees from Australia under this MOU. …

10. Persons to be transferred to Papua New Guinea are those persons who:

However, the PNG Supreme Court has invalidated the agreement with its bombshell decision:

It was the joint efforts of the Australian and PNG governments that has seen the asylum seekers brought into PNG and kept at the Manus Island Processing Centre against their will. These arrangements were outside the constitutional and legal framework in PNG. … The forceful bringing into and detention of the asylum seekers on MIPC is unconstitutional and is therefore illegal.

Peter Dutton, Australia’s Minister for Immigration and Border Protection, issued a statement saying that it’s PNG is problem, not Australia’s:

This is a decision of the Supreme Court of Papua New Guinea. Australia was not a party to the legal proceedings. It does not alter Australia’s border protection policies – they remain unchanged. No one who attempts to travel to Australia illegally by boat will settle in Australia.

The Government will not allow a return to the chaos of the years of the Rudd-Gillard Labor Governments when regional processing was initiated to deal with the overwhelming illegal arrivals of more than 50,000 people. The agreement with Papua New Guinea to establish the Manus Island RPC was negotiated by the Labor Government.

Those in the Manus Island Regional Processing Centre found to be refugees are able to resettle in Papua New Guinea. Those found not to be refugees should return to their country of origin. People who have attempted to come illegally by boat and are now in the Manus facility will not be settled in Australia.

However, this announcement by Dutton was unwelcome in PNG, where the PNG prime minister, Peter O’Neill said, “Respecting this ruling, Papua New Guinea will immediately ask the Australian government to make alternative arrangements for the asylum seekers currently held at the regional processing center.” Australia Department of Foreign Affairs and Trade and Australia Minister for Immigration and Border Protection and Guardian (London)

It is believed that North Korea’s child dictator Kim Jong-un rushed the three missile tests in order to show off regime accomplishments prior to the Seventh Party Congress, which convenes on May 6.

Because all three missile tests were botched, it is now thought Kim will order a nuclear test just prior to May 6.

In other news, Kim has ordered a massive crackdown on its people, and has tightened security along its border with China. The regime also has been restricting entry into the capital Pyongyang and has ordered residents not to hold ceremonial occasions such as weddings or funerals. According to one source:

The North has completely blocked its capital and the border area after declaring a special surveillance period. The regime is conducting random inspections of houses in Pyongyang and ordering visitors, including relatives, to immediately return to their own homes.

Security forces are also inspecting factories and institutes, checking when workers come to and leave work. The harsh new security measures are apparently intended to combat Kim’s anxieties that unexpected violence could embarrass him prior to the party congress. Joongang (Seoul) and Yonhap (Seoul) and Korea Times