Adjacent to the present-day Philadelphia International Airport sits a muddy expanse of marshland that during the American Revolution was actually an island in the Delaware River. In 1777, the swampy area, called Mud Island, was some of the most important real estate in North America because it held an American fort of strategic significance.

Atop the tiny island, zigzagging ramparts made of cut stone and timber stretched the length of three football fields, amid fieldworks bristling with Patriot artillery pieces. Known as Fort Mifflin, the fortification boasted a maze of embankments and dikes, along with hundreds of “wolf holes,” shallow pits filled with sharpened spikes designed to gore a British assault force.

During the fall of 1777, this Patriot fort became the site of one of the Revolution’s longest sieges and greatest bombardments. This epic struggle is recounted in a new bestselling book, Washington’s Immortals, which chronicles the actions of the elite troops of the Maryland Line, some of whom played a key role in defending Fort Mifflin. This unique book is the first Band of Brothers treatment of the American Revolution, capturing the most important elements of nearly every significant battle of the War of Independence. 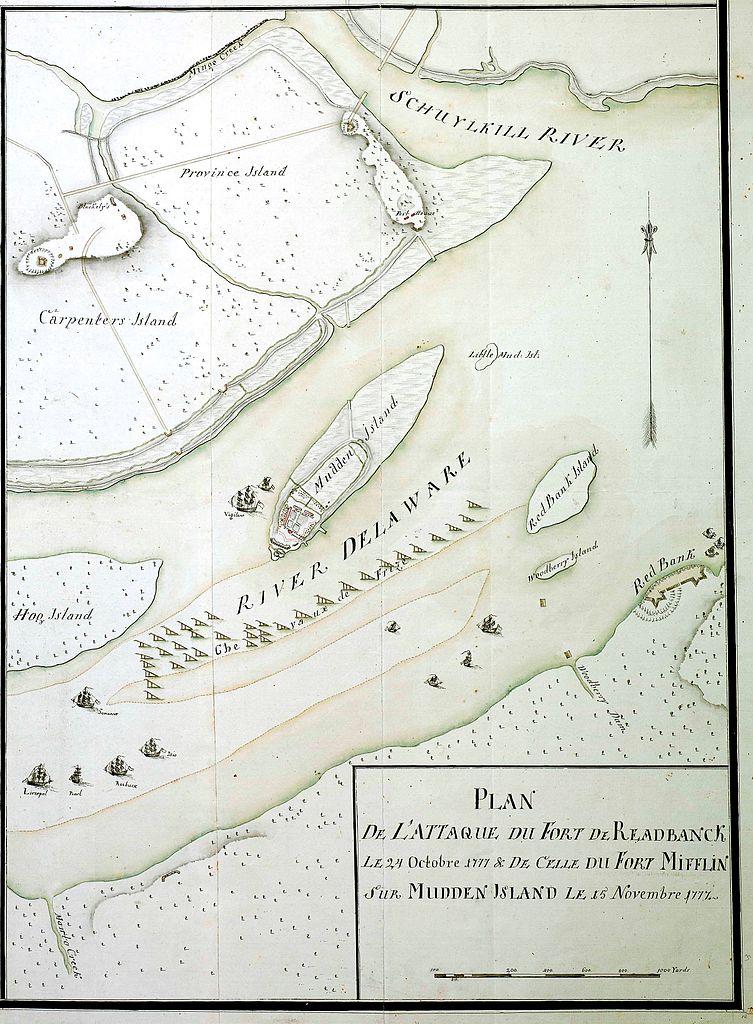 The fort on Mud Island was of vital strategic importance. The British needed to resupply troops in Philadelphia for offensive operations before winter set in, when the British army, like most European armies of the time, would enter winter quarters. Without resupply of their army in Philadelphia, everything from gunpowder to fodder and food for beast and man alike, the British would be forced to curtail offensives against Washington’s tattered army.

Every day the Patriot fort held was a day closer to winter weather and a potential pause in the fighting; however, any Royal Navy convoys attempting to reach Philadelphia would have to pass by Fort Mifflin’s cannon and over its chevaux-de-frise, underwater boxes filled with rocks and massive logs, covered in iron-pointed spikes that could rip the hull out of any ship. The British dispatched their chief engineer, Captain John Montresor, to oversee Fort Mifflin’s destruction. He was uniquely suited for the job, having ironically also been in charge of designing the fort some six years earlier.

Leading the Patriot defenses at the fort was Samuel Smith, a twenty-five-year-old lieutenant colonel from Maryland. By his side was a courageous twenty-eight-year-old French engineer, Major François-Louis Teissèdre de Fleury, who was known for his leadership and diplomacy. They led a force of several hundred men from Maryland, Connecticut, and other states. Noting that “the keeping of this fort is of very great importance,” General George Washington ordered Smith and his men “to defend [Fort Mifflin] to the last extremity.” 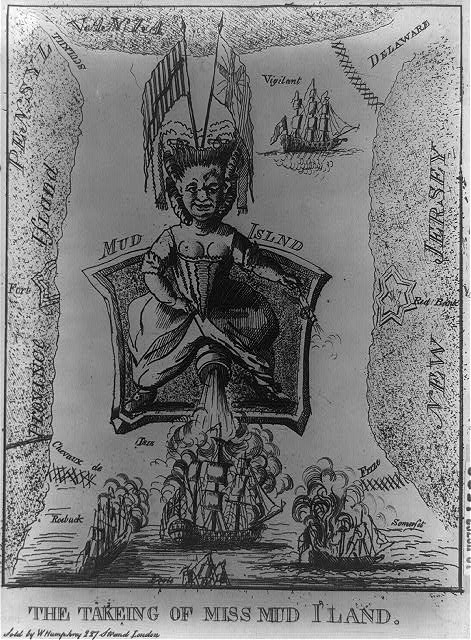 Montresor began his assault by carefully placing artillery in flanking positions around the fort. He then began a cannonade that would be one of the longest of the war. Under the constant bombardment, the Patriots worked tirelessly to extinguish fires and repair the damage to the fortifications, while also returning fire with their own guns. On one occasion, they fired what was perhaps the luckiest shot of the Revolution. A British soldier recalled that from about 500 yards away, an American cannon shot a 12-pound ball at one of the British artillery pieces. The ball landed smoothly in the barrel of the larger British gun, causing no damage at all, and the gun soon fired back at the Americans.

As the siege wore on, the British flanked the fort with artillery, one position so perilously close that it gave the British gunners a clear field of fire on Mud Island. A man of action, Smith led a raid on one of the British artillery positions. Boarding small boats, the Maryland officer and his men left the fort and amphibiously landed behind the British gunners. Sneaking up on them in the night, he and his men fired on the British artillerists, forcing dozens to surrender. When some of the officers refused to give up their artillery to the Americans, Smith fired two shots near them. Finally, under the barrel of a gun, they agreed to capitulate. The Patriots then spiked the cannons rendering them inoperable, but the British still had plenty of artillery from other positions and aboard their ships.

Nearly two weeks into the siege, the British attempted a naval assault, sending two gunships, the HMS Augusta and the HMS Merlin, up the river. The Patriot guns took out one vessel. In the attack, magazines on board the Augusta detonated, and the tremendous explosion shattered windows many miles away in Philadelphia. Most of the crewmembers from the Augusta perished; those on the Merlin ran aground on a sandbar, and the crew abandoned and scuttled their ship before they could meet a similar fate.

After the failed attack, the British redoubled their efforts, and the constant bombardment took a toll on American lives. Connecticut Private Joseph Plumb Martin recalled, “Our men were cut up like cornstalks. I saw five artillerists belonging to one gun cut down by a single shot, and I saw men who were stooping to be protected by the works but not stooping low enough, split like fish to be broiled.”

For a time, it appeared that the Americans would succeed in their defense of the fort. But on November 11, Smith was writing a letter in his quarters when a cannonball sailed through the chimney and struck him, gravely injuring the Marylander. After Smith’s evacuation, de Fleury attempted to rally the men, but their spirits were nearly broken. He wrote to Washington, “The garrison is so dispirited that if the enemy will attempt to storm us, I am afraid they will succeed.”

On November 15, British warships and artillery attacked in unison. The ferocious bombardment tore into the badly damaged fort; blood, brains and assorted body parts lay scattered throughout the demolished fortifications. Several officers, including de Fleury, were wounded, and ultimately 250 of the approximately 400-man garrison would be killed or wounded. Martin wrote, “The whole area of the fort was as completely ploughed as a field. The buildings of every kind hanging in broken fragments … If ever destruction was complete, it was here.”

Still, the Americans held on for one more day. Then, under cover of darkness on the night of November 15, they left Mud Island, leaving behind two things: their flag, which was still flying, and a drunken soldier. The inebriated sot convinced the British that he had stayed behind because he wanted to desert to their side, but after they provided him with clothing and the bounty paid to new soldiers, he deserted again and joined Washington’s army at Valley Forge.

A long, cold winter was coming, and the Americans would need to muster the resolve they displayed at Fort Mifflin to survive bitter cold, hunger, and disease at Valley Forge.

Patrick K. O’Donnell is a bestselling, critically acclaimed military historian and an expert on elite units. He is the author of ten books. Washington’s Immortals is his newest book. O’Donnell served as a combat historian in a Marine rifle platoon during the Battle of Fallujah and speaks often on espionage, special operations, and counterinsurgency. He has provided historical consulting for DreamWorks’ award-winning miniseries Band of Brothers and for documentaries produced by the BBC, the History Channel, and Discovery. PatrickKODonnell.com @combathistorian