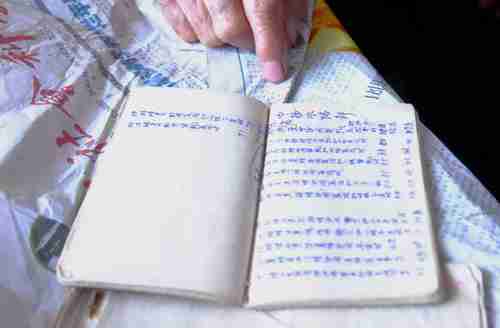 Supposedly, this is a picture of Su Chengfen’s 600 year old book (China Daily)

An investigation by the BBC reveals that a Chinese claim of “ironclad proof” of China’s South China Sea claims is apparently a hoax.

For several weeks, China’s state media has been making a big deal about an “ancient book,” 600 years old, that proves that Chinese fishermen were fishing in the Paracel Islands and beyond. From there, according to a leap of logic that isn’t clear to me, China says that this is “ironclad proof” that the Paracel Islands belong to China.

Here’s the description from Chinese media:

Su Chengfen has spent all his life fishing in the reef-filled South China Sea, guided by a handwritten book more than 600 years old that depicts routes to various remote islands from Hainan province.

The former fishing vessel captain, who lives in the town of Tanmen, cherishes the book, wrapping it in layers of paper even though at 81 it is impossible for him to return to the sea.

He has always known it is precious, as it contains detailed information handed down over the generations, but at first he had not realized its true significance.

Specialists say the information the book contains is undeniable proof of China’s sovereignty over Huangyan Island.

“Unlike other versions, it depicts the exact route to Huangyan Island. It clearly proves that generations of Chinese fishermen have worked on the island,” said Zhou Weimin, a retired professor at Hainan University.

Another Chinese official says, “It is ironclad proof… We can deduce China’s historic fishing and sailing rights in the South China Sea, as well as ownership.”

Huangyan Island is China’s name for Scarborough Shoal, a reef that is a little less than 200 kilometers from Subic Bay, well within the Philippines’ exclusive economic zone or EEZ. So there is absolutely no way that that this book provides “ironclad proof” of anything. Even if the book is as described, it only proves that Chinese fishermen were fishing in Philippine waters centuries ago. It would not be surprising if someone discovered that Philippine fishermen fished in Chinese waters centuries ago, but that does not mean that China is Philippines’ sovereign territory.

In the sixth decade BC, Julius Caesar’s army conquered France, as he described in his Gallic Wars. But that does not mean that France is the sovereign territory of Italy. So Su Chengfen’s book, even if it existed, would have no value whatsoever that I can see.

However, the BBC sent its China correspondent, John Sudworth, to visit 81-year-old Su Chengfen in the town of Tanmen on Hainan island. He wanted to speak to Su, and see this wonderful book for himself. According to Su:

It mainly taught us how to go somewhere and come back, how to go to the Paracels and the Spratlys, and how to come back to Hainan Island.

OK. So Sudworth asked to see the book, but Su tells him the book doesn’t exist.

Although the book was important, I threw it away because it was broken.

It was flipped through too many times. The salty seawater on the hands had corroded it… In the end it was no longer readable so I threw it away.

According to Su, the book was thrown away in the late 1980s.

In particular, all the stuff depicting the “exact route” to the Scarborough Shoal is a 30 year old memory in the head of the 81 year old Su.

Some Chinese media reports claim that there are other books, but look again at the paragraph quoted above:

Unlike other versions, it depicts the exact route to Huangyan Island. It clearly proves that generations of Chinese fishermen have worked on the island,” said Zhou Weimin, a retired professor at Hainan University.

So the other books do not depict the route to Scarborough Shoal.

So China’s “ironclad proof” consists of a book that doesn’t exist, that may or may not have ever existed, and whose contents if it existed can only be guessed at. And even if it did exist, it only proves that Chinese fishermen were fishing in waters belonging to the Philippines, much as they’re doing today. BBC and China Daily (24-May) and Julius Caesar – Gallic Wars – 58-51 BC

The craziness of China’s claims in South China Sea

The above story is so crazy and farcical that I would barely believe it happened if I hadn’t verified that the claims were made on several Chinese media sites and were refuted on the BBC site, as well as on the televised BBC World News, which showed Sudworth’s actual interview with Su. And yet it did happen.

From the point of view of Generational Dynamics, a generational Crisis era is in many ways similar to a human being’s midlife crisis. A man may have a happy home with a wife and kids, but suddenly he becomes obsessed with a woman at work and has to have an affair with her, and does, using any ridiculous or bizarre reason to justify it, and ends up wrecking the lives of everyone around him. China is displaying the same kind of destructive and self-destructive behavior as a nation.

A 2014 book called The South China Sea: The Struggle for Power in Asia by Bill Hayton is a detailed analysis of all of China’s claims to the South China Sea and finds them, to no one’s surprise, invalid. If they had any validity, then China would not hesitate to ask the relevant United Nations court to rule on them. Instead, China has angrily refused to let any court tell them what to do, and instead is spending billions of dollars in a vast military buildup that can only lead to war.

Presumably, China is doing this for economic reasons, but Hayton quotes oil industry experts who say that they’re skeptical that the South China Sea contains immense reserves of oil and gas, and that the fish stocks are becoming depleted.

Instead, the South China Sea has become a highly nationalistic symbol, backed up by highly irrational, farcical and bizarre justifications, like the alleged 600-year-old book described above, and by the widespread belief that the United States is too weak or too tired of war to fight, or that China will win such a war within a few days. This is the same kind of irrational belief that caused America’s South to attack Fort Sumter, even though the North was three times as big, or that caused Japan to bomb Pearl Harbor, even though the US was five times as big. In all cases, including China today, these beliefs have been totally delusional and disastrous for everyone.

China always says that its claims “are indisputable,” and this much at least is a total lie since the claims are very much in dispute, and are currently being adjudicated by the Permanent Court of Arbitration, a United Nations international court in the Hague, which is expected to rule on counterclaims by the Philippines in the near future. China has huffed and puffed and blustered on this issue, saying that the court has no right to adjudicate or that any ruling would be ignored, sounding like nothing so much as that middle-aged man caught having an affair.

Irrational beliefs that lead to world wars are typical of generational Crisis eras. The 600 year old book won’t be the last one and the Chinese themselves, the ones who survive, will regret it most of all. Asia Sentinel and Economist (13-Sep-2014) and South China Morning Post (Hong Kong)

The military buildup in the South China Sea is not exclusively on China’s side. The US Navy has been conducting Freedom of Navigation patrols in the South China Sea, and Japan has sailed warships into Vietnam’s Cam Ranh Bay seaport, for the first time since Japan was forced to withdraw from Vietnam at the end of World War II.

France’s defense minister Jean-Yves Le Drian is calling for the European Union to get involved in the South China Sea dispute. According to Le Drian:

If we want to contain the risk of conflict, we must defend this right, and defend it ourselves.

If the law of the sea is not respected today in the China seas, it will be threatened tomorrow in the Arctic, in the Mediterranean, or elsewhere. […]

France’s navy is already involved, as it has already been deployed three times in the South China Sea so far this year. France has also signed a $40 billion deal in April to sell advanced submarines to Australia. Le Drian would like European navies to have a “regular and visible” presence in the region, to uphold the law of the sea and freedom of navigation.

China’s aggressive and virtually unsupported claims to the South China Sea are not the local or regional issue that one might expect, but are quickly expanding to become worldwide international issues. Foreign Policy and Bloomberg and Straits Times (Singapore)

A request to readers: Protect the Generational Dynamics legacy

The text and images for all the 4000 articles that have appeared on the Generational Dynamics web site since 2003 – over six million words and 4,000 images – are now available to be downloaded. This includes PDF files for the three books that I’ve written. They are now available on the download site https://www.generationaldynamics.com/dl/.

With the worsening situation in the South China Sea, with several wars going on in the Mideast, with more displaced refugees in the world today than in decades, just one miscalculation by one person could result in a war that spirals into something really major. The entire internet, including my web site, could instantly become unavailable.

Add to that the fact that I, like anyone else, could be hit by a bus tomorrow. Any one of these events could mean the immediate disappearance of my web site and almost 15 years of work that I put into developing Generational Dynamics would be gone.

So I’ve posted a download page providing downloads of all the major documents and files, over six million words of text. I would like to ask as many people as possible to download these files and save them somewhere, so that if ten years from now someone is looking for the information about Generational Dynamics, then somebody somewhere will still have a copy, and the work will survive.