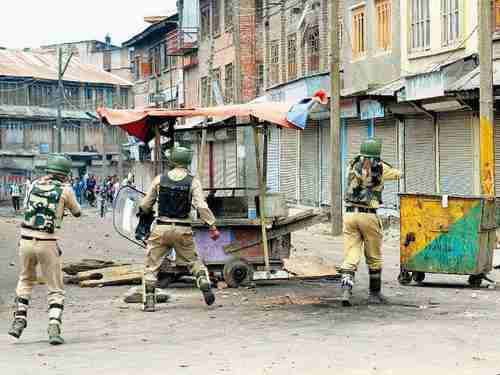 Anti-Indian protesters clashing with Indian police in Srinagar in Kashmir

Hospitals in Indian-controlled Kashmir are being overwhelmed with patients after four days of clashes between police separatist demonstrators. The protestors are demanding that two provinces, Kashmir and Jammu, separate from India and become part of Pakistan, because of the large Muslim population.

The violence was triggered on Friday when activist Burhan Wani, 22, was killed in a gunfight with the Indian Army. Wani was a division commander in Hizbul Mujahideen, a separatist organization, and was very popular with on social media. Hizbul Mujahideen is the largest activist organization fighting against Indian rule in the contested Jammu-Kashmir region.

India’s army imposed a curfew on Saturday, but that drew out thousands of angry rock-throwing protesters defying the curfew. Indian army troops used live ammunition and pellet guns to try and quell the violence, which has continued for several days. A mob attacked a police station on Tuesday. Hospitals are being overwhelmed by the arrival of hundreds of wounded patients. In all, at least 36 people were killed, including one policemen, and thousands of people were injured.

With the strict curfew still in place, Kashmir was relatively quiet on Wednesday, despite the fact that it was the anniversary of “Martyrs’ Day,” when Kashmiris were killed by police firing on protesters on July 13, 1931. Tribune India and AP and Daily Times (Pakistan)

Kashmir was a major battleground for the 1947 Partition war that followed the partitioning of the Indian subcontinent into India and Pakistan, one of the bloodiest wars of the last century. The Kashmir region was a particularly bloody site of the war between Hindus and Muslims, and it is still disputed, with an internationally recognized Line of Control (LoC) separating the regions currently governed by Pakistan from those governed by India.

As I’ve described in numerous countries that have been through a generational crisis civil war, there is a consistent pattern that such countries almost always follow.

About 20 years after the end of an ethnic civil war, a post-war generation comes of age. They have no personal memory of the war, and all they know is what they have heard from their parents and friends, so they have very limited information. The kids in this generation on each side know nothing of the atrocities their side committed, but know a lot about the atrocities committed against them by the other side. So the two sides of this generation come of age knowing two completely different sets of partial information.

So after 20 years, these young people start to rebel. This can take the form of anything from peaceful protests to violent riots to terrorist attacks. The governing authorities, usually from the side that won the war, fear a renewal of the civil war and react to the protests in various ways. At first, simple police actions work, at least for a while. In Thailand, the army is trying to control the “red shirt” indigenous Thais through coups and a constitutional referendum. In Burundi, Pierre Nkurunziza is selectively killing, torturing and jailing Tutsi opponents. In Zimbabwe, Robert Mugabe conducted wholesale slaughter of the Ndebele opponents. In Syria, Bashar al-Assad is currently conducting wholesale slaughter of Sunni opponents. In Bangladesh, “the Sheikh Hasina Government has decimated the leadership of established Islamist terrorist formations and their sympathetic institutions,” according to one analysis, and arrested over 3,000 people in a sweep last month.

Jammu-Kashmir has following the same pattern. There were constant protests and brief conflicts between Indians and Pakistani Muslims, ending in agreements for peace that lasted weeks or months before low-level violence began again, with each new round of violence worse than the last.

The relatively small protests of the Recovery and Awakening eras became widespread protests and an armed insurgency that began following a disputed election in 1987, as JK entered its generational Unraveling era.

In 1989, Hizbul Mujahideen was formed. Although it was funded and supported by Pakistan’s Inter-Services Intelligence (ISI) agency, the important fact from the point of view of Generational Dynamics is that it quickly became extremely popular, with thousands of members by the early 1990s. Hizbul Mujahideen has been riven by splintering and internal conflicts, but there are today thousands of anti-India protesters in Indian-governed Kashmir.

There are numerous stories in the press suggesting ways to “solve the core problems” in Jammu-Kashmir. From the point of view of Generational Dynamics, no such solutions exist, and there will be continue to be clashes in the future. These solutions completely miss the point. They suggest that some politician pursue peace talks or something similar. That’s always the easy suggestion from people who have no clue what’s going on. These protests are not coming from politicians. They’re growing organically from the population, and no politician can either cause them or stop them. Generational Dynamics predicts that Muslims and Hindus will have a full-scale war, re-fighting the 1947 Partition war that followed the partitioning of the Indian subcontinent into India and Pakistan. The Hindu and Greater Kashmir and SATP (India) and The News (Pakistan)