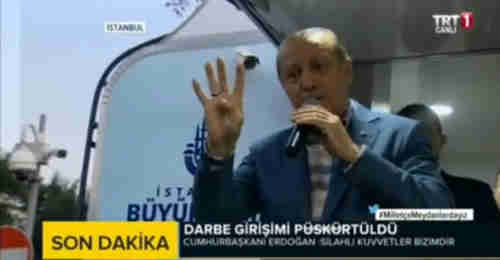 Following Egypt’s 2013 army coup that ousted the democratically elected Mohammed Morsi and his Muslim Brotherhood (MB) government, there were massive protests and sit-ins in Cairo and clashes between MB supporters and the army, resulting in nearly 1,000 deaths. Most of the clashes occurred in Cairo’s Rabaa Square. In Arabic, the word “Rabaa” or “Rabia” means “fourth,” and so MB supporters adopted the name “R4BIA” for the new four-fingered salute, which consists of raising for fingers, and folding you thumb over your palm. ( “24-Aug-13 World View — Turkey’s Erdogan adopts Muslim Brotherhood’s four-fingered salute”)

In the middle of his first major speech on Saturday following the coup attempt in Turkey, president Recep Tayyip Erdogan flashed the R4BIA four-fingered salute, as shown in the above screen grab, as a signal that he still supports the Muslim Brotherhood in Egypt. ( “17-Jul-16 World View — Attempted army coup in Turkey collapses within hours”)

The significance of this is that it’s a new indication that Erdogan has no intention of reconciling with Egypt. Erdogan has reconciled with both Israel and Russia in recent weeks, and some analysts had speculated that Egypt would be next. However, Erdogan’s four-fingered salute on Saturday is one of several indications that no such reconciliation is possible at this time.

On several occasions, Erdogan has said that his differences are with Egypt’s president Abdel Fattah al-Sisi, who masterminded the 2013 coup, and not with the Egyptian people. Al Monitor and Washington Post and YouTube – Erdogan – watch 16:30-17:00 and The Conservative Treehouse

Bahrain tensions rise as Sunni government cracks down on Shias

The Sunni-ruled government of Bahrain on Sunday ordered the dissolution of the country’s main opposition group, the Shia organization Al Wefaq National Islamic Society, despite enormous international criticism from Western countries and human rights organizations. Al-Wefaq was closed by court order last month. Bahrain’s population is 2/3 Shia Muslim, but the country is led by an oppressive Sunni government closely allied with Saudi Arabia.

In May, Bahrain’s courts found the Al-Wefaq leader Sheikh Ali Salman guilty of charges relating to “publicly inciting hatred, an act which disturbed public peace, inciting non-compliance with the law and insulting public institutions.” Salman’s Al Wefaq National Islamic Society issued a statement calling the decision “an alarming politically-motivated verdict [that] only deepens the political and constitutional crisis in Bahrain.”

On Sunday, a court in Bahrain ordered the dissolution of Al-Wefaq, accusing it of harboring terrorism, inciting violence and encouraging demonstrations and sit-ins which threaten to spark “sectarian strife,” and ordered the seizure of all of the organization’s assets.

Iran has not yet commented on the dissolution of Al-Wefaq, but last month when it was closed, Iran issued a statement:

The oppressed Muslim nation of Bahrain had been under the cruel, biased, unfair, and illegitimate regime of Al-Khalifa for long years. Despite furious acts which included unashamedly racist discrimination, arrest of their religious leaders, imprisoning and torturing women and children, stripping citizenship, violation of their rights without any qualms and several other crimes, this patient people have exercised patience; tightening the pressures has never distracted Bahraini people of their non-violent approach.

Bahrain will try the kingdom’s most prominent Shia cleric, Sheikh Isa Ahmed Qasim, accusing him on Saturday of illegal fund-raising and money-laundering.

In addition, Bahrain is threatening to strip the entire Shia cleric community of its sources of income, by taking over collection of a Shia tax, known as the fifth or “khums,” because it taxes up 20% (one-fifth) of all excess wealth that has accumulated in the accounts of the faithful for more than a year.

According to a Bahrain government official:

Investigations have confirmed that Qasim harnessed the money of poor Shias to finance terror activities in Bahrain and that he sent some of those findings to Iran.

We [the authorities] will be collecting the khums in a transparent way although [I admit that] the process will take time.

Last month, after Qasim’s citizenship was revoked, tens of thousands of his supporters to take to the streets. As Bahrain’s minority Sunni government continues harsher and harsher crackdowns on the majority Shia population, it’s feared that there will be a repeat of the massive protests that occurred in 2011.

According to Rashed al-Rashed, a leading opposition figure in Bahrain, “Nobody can foresee what would happen, but too much blood will be shed in case of Sheikh Qasim’s arrest.” Middle East Eye and Tasnim News (Tehran)