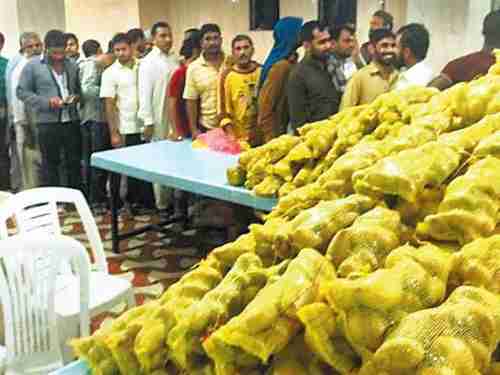 About 10,000 migrant workers from India are starving and living in inhumane conditions in Saudi Arabia because they have received no pay for seven months and are unable to buy food. Many have lost their jobs, while others are continuing to work but are unpaid nonetheless.

Most are construction workers, but many large construction projects have been canceled or cut back by the Saudi government because sharply falling oil prices have caused a financial crisis in the Saudi kingdom.

Over the weekend, India’s Embassy in Riyadh and its Consulate in Jeddah distributed 15,475 kg of food to Indian migrants in five labor camps in cities across Saudi Arabia over the weekend, to keep them from starving. There are plans to bring thousands of these workers back to India by the end of August.

There are about 3 million Indians living and working in Saudi Arabia, most of them as blue-collar workers.

Separately, the Philippine Overseas Employment Administration (POEA) has suspended the rights of Saudi companies to hire Filipino workers. More than 11,000 overseas Filipino workers (OFWs) in Saudi Arabia have been laid off and are not receiving salaries. Sky News and The Hindu and Manila Bulletin

India and Saudi Arabia move to warm relations with each other

India’s Minister of State for External Affairs V K Singh will travel to Saudi Arabia to assess this week to assess the severity of the food crisis facing the jobless migrants from India. He will meet with Saudi officials, and the meetings are expected to be cordial, despite the difficulty of the situation.

India has to juggle several partnerships in the Mideast, including relationships with the Gulf Cooperation Council countries, Iran, and Israel. India receives 58% of its oil imports and 88% of its liquefied natural gas imports from the Mideast. There are 7.3 million migrant Indians working in the region, and they sent over $36 billion in remittances back to their families in India in 2015.

The relationship is important to Saudi Arabia as well. India has huge Muslim populations, both Sunni and Shia, making Saudi Arabia a major tourist attraction. In particular, over 400,000 Indians visit Mecca each year for the Muslim rituals (Hajj and Umrah).

There is also a political reason why Saudi and Indian relations have been warming: Pakistan.

Saudi Arabia and Pakistan are very closely tied together, but the Saudis are still extremely angry at Pakistan’s government because Pakistan refused to contribute any troops last year to the Saudi war against the Houthis in Yemen. So for the Saudis, a relationship with India is a way of saying to Pakistan that they are not the only dance partner.

India has been at war with Pakistan several times in the last 50 years, and tensions are very high in the disputed border regions. ( “21-Jul-16 World View — India-Pakistan tensions grow over Kashmir issue”) So for India, a relationship with the Saudis is a way of telling the Pakistanis that perhaps they can’t count on Saudi support after all.

There are some similar issues with Iran, but in reverse. India and Iran have very close relations, while Saudi Arabia and Iran were close to war earlier this year. ( “4-Jan-16 World View — Saudi Arabia cuts diplomatic ties with Iran as violent Shia protests spread around region”)

Regular readers know that warm relations between Saudi Arabia and India are counter-trend, as Generational Dynamics predicts that in the coming Clash of Civilizations world war, China, Pakistan, and the Sunni Muslim countries will be one side, and India, Iran, the United States and the West will be on the other side. ( “15-Jul-2015 World View — Arab views of Iran nuclear deal”) So the warm Saudi-India relationship will not continue.

Readers who find this confusing should recall that Germany and Britain were close trading partners up until World War II began. Also, Russia and the US were enemies before and after WW II, but were allies during the war. The way to understand this is that during “normal” times, politicians can make whatever policies they want, even total nonsense policies. But during a generational crisis war like WW II, when the nation and its way of life are facing existential threats, then policies must be chosen that guarantee the survival of the nation, even if it means reversing every policy that prevailed before the war. Indian Express and Al Monitor (3-Apr) and Brookings (1-Apr)