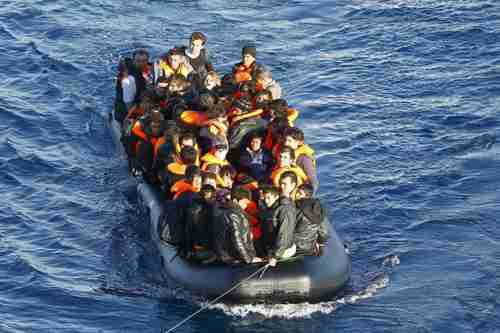 After the EU-Turkey migrant deal was agreed in March, the number of migrants traveling from Turkey to Greece fell almost to zero.

However, the number of migrants has surged since the July 15, when there was an attempted government coup in Turkey. It is now running close to 100 per day, which is still far smaller than the average of 2500 per day last year in August.

Since the start of 2016, more than 160,000 migrants have illegally traveled from Turkey to Greece. The figure was more than one million in all of 2015.

So the number is still sharply lower than it was prior to the EU-Turkey deal, the refugee situation is far from resolved.

A total of over 275,000 migrants have reached Europe this year, including 101,000 arriving in Italy from North Africa.

Supposedly the “Balkan route” that migrants used to travel from Greece to Germany was closed in March, but officials from Serbia are reporting that an average of 300 new arrivals are entering the country illegally every day. This number exceeds the 100 migrants per day arriving in Greece from Turkey, so the other 200 must be coming from refugee camps. BBC and B92 (Belgrade)

Concern grows over unsafe conditions in refugee camps in Greece

Although the number of migrants arriving in Greece from Turkey is far smaller than the number last year, but for the 100 or so per day who do make the trip, conditions are severely worsening, as are conditions for the tens of thousands who are still living in Greek refugee camps.

Like last year, the migrants who arrive in Greece first arrive in one of the Greek islands in the Aegean Sea: Lesvos, Chios and Samos. But last year, Greece ran a ferry to carry the migrants from the islands to Athens, from where the migrants continued their journey north. This year, there’s no ferry and the Balkan Route is close, so there is no way to travel north.

The result is that migrants are trapped in overcrowded refugee camps on the islands, and are unable to leave. According to Save the Children, the situation is almost “back to square one,” from before the EU-Turkey migrant deal:

As the number of arrivals creeps up again, we’re starting to see scenes reminiscent of last summer. Except this time, most asylum seekers are unable to continue their journeys, and are trapped on the islands, in overcrowded facilities, and under the blazing sun.

Mothers with small babies are being forced to sleep on the ground in make-shift tents, children and breastfeeding women are suffering from dehydration due to water shortages in some camps, and tensions are increasing as basic services, such as toilets and showers, are stretched.

Families who have fled violence and death in their homeland continue to live in fear and do not feel safe. They have told Save the Children staff that they are too scared to let their children out of their sight due to the frequent protests and a lack of security in the camps.

There are similar problems with migrants trapped in the refugee camp called “The Jungle” in Calais France. There are some 5,000 refugees trapped there, including hundreds of children.

The public has largely lost interest in the migrant problem since the EU-Turkey deal, and there’s little public concern for what’s going on in the refugee camps in Greece, France, and elsewhere. But public opinion is fickle, and any day there could be something that calls attention to the problem. Daily Mail (London) and CNet

Fears grow that the EU-Turkey migrant deal will collapse

In an interview earlier this week, Turkey’s Foreign Minister Mevlut Cavusoglu repeated his demand that EU abide by its commitments in the EU-Turkey migrant deal, specifically visa liberalization — allowing any of Turkey’s 74 million citizens to be able to travel freely throughout Europe’s Schengen zone without a visa. ( “16-Aug-16 World View — Turkey threatens EU migrant deal, saying EU is humiliating Turkey, not helping”) According to Cavusoglu:

I don’t want to talk about the worst-case scenario but it is clear: either we apply all the agreements together, or we set them all aside. It can’t be that we implement everything that is good for the EU but that Turkey gets nothing in return.

Cavusoglu set October as a deadline. A previous deadline of June has already been ignored, and few people believe that the EU will approve visa liberalization by then.

The number of migrants crossing from Turkey to Greece has already begun to surge since the July 15 attempted coup in Turkey. What this illustrates is that Turkey can apply pressure on a gradual basis. Turkey could allow the number of migrants daily to increase from 100 to 150 to 200 and so forth, continuing to demand that the EU meeting its commitments.

Greece’s government is also taking steps to prepare for a new wave of migrants by lobbying the EU government to modify the 1990 “Dublin Agreement,” which specifies that a migrant can request asylum only in the first EU country in which the migrant arrives. Since that country is Greece most of the time, Greece is bearing most of the burden of the refugee crisis. Greece would like to modify the agreement to put into effect a plan to distribute migrants to all of the EU nations. However, some eastern European countries have indicated that they will refuge to receive any migrants at all, and diplomatic sources have indicated that any change to the Dublin Agreement is unlikely during Slovakia’s presidency of the EU, which finishes at the end of the year.

According to some reports, Germany is planning to send some 3,000 migrants to Greece in the coming weeks, following the rules of the Dublin Agreement. Kathimerini and Greek Reporter