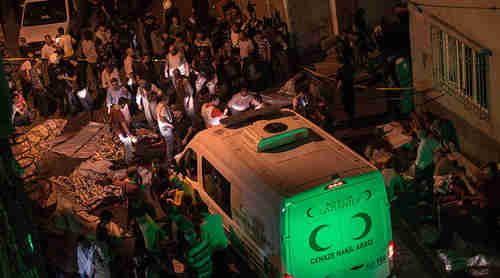 Ambulances arrive at the site of the Gaziantep terror attack (AFP)

The so-called Islamic State (IS or ISIS or ISIL or Daesh) is being blamed for a “barbaric” terror attack on Sunday on a wedding ceremony in Gaziantep, in southeastern Turkey, killing 51 people and injuring 69 more. Gaziantep is a large Kurdish community just across the border from Aleppo in Syria

Turkey appears to be in a downward spiral of instability following a year of dramatic events, including multiple terror attacks by ISIS, multiple terror attacks by the Kurdistan Workers’ Party (PKK), and a failed coup attempt on July 15 that Turkey. Turkey’s president Recep Tayyip Erdogan is blaming the coup attempt on the Fetullahist Terror Organization (FETO), led by Fethullah Gulen, a 76-year-old Turkish Muslim cleric, living in self-imposed exile in America since splitting with Erdogan in 1999.

There are strong indications that the attack was carried out by ISIL. A suicide bomber aged between 12 and 14 blew himself up. We know that ISIL has been trying to gain ground in Gaziantep for a while now. …

[The] place where terror comes from doesn’t make any difference for us. …

There is no difference between the PKK, the FETO or Daesh [ISIS]. All of them are terrorists. …

Those who cannot defeat Turkey try to provoke people by abusing ethnic and sectarian sensitiveness, but they will not prevail.

Erdogan said the aim of such attacks was to sow division between different groups in Turkey such as Arabs, Kurds and Turkmens.

American and European officials, who had previously been accused of showing more sympathy for Turkey’s attackers than for Turkey, rushed to offer condolences. US Secretary of State John Kerry tweeted, “Strongly condemn the barbaric terrorist attack in #Gaziantep. The US stands squarely with our ally #Turkey against the scourge of terrorism.” Hurriyet (Ankara) and BBC and Daily Sabah (Ankara)

Report: US military moving nuclear weapons from Turkey to Romania

As we reported last week, analysts are pointing out that if Turkey’s July 15 attempted coup had been successful, then America might have lost control of the 50 or so B61 tactical nuclear weapons that are being stored at Incirlik. ( “16-Aug-16 World View — Turkey threatens EU migrant deal, saying EU is humiliating Turkey, not helping”)

Russia and Romania are both Eastern Orthodox Christian countries, and historically fought bloody wars against the Muslim Ottoman Empire (Turkey) in World War I and previous wars. So moving the nuclear weapons from Turkey to Romania carries a great deal of symbolic significance to both countries.

On the other hand, Romania is not on such good terms with Russia either. In World War II, Romania initially was forced to ally with Nazi Germany, but in 1944 was forced to switch sides and ally with the Soviet Union. The Soviets then brutally occupied Romania from 1944 to 1958. So even though Romania and Russia are both Eastern Orthodox Christian countries, there is a great deal of mutual hostility.

The United States has deployed in Romania an $800 million missile shield that was switched on in May. The nominal purpose of the missile shield is protection from Iran, but Russia believes that its existence makes Russia more vulnerable to attack from Nato.

Stationing tactical nuclear weapons in Romania, along with the missile shield, is likely to infuriate Russia and raise security concerns. There may be some kind of retaliation.

Romania has strongly denied that any nuclear weapons are being moved there from Turkey. EurActiv and Balkan Insight and Debka

Turkey has announced a major change in its policy towards Syria. In the past, Turkey has been insistent that Syria’s president Bashar al-Assad must go as part of any peace settlement. In the new policy, al-Assad may remain in power for six months after the peace agreement has been signed.

The change is being driven by increasing power of the Kurds. From the point of view of Turkey’s president Recep Tayyip Erdogan, the Syrian Kurds are terrorists, and are the Syrian branch of the PKK terrorists. However, the United States has been using the Syrian Kurds as a fighting force against ISIS, and the Kurds have been gaining control of regions of northern Syria.

As we have written in the past, the nightmare scenario for Turkey is that the Kurds take control of various regions in northern Syria and link them together to form a large area in northern Syria along the border with Turkey. The Kurds could then claim a Kurdish state in Syria stretching from the Mediterranean to Iraq, along Turkey’s border

This is creating a temporary three-way marriage of convenience involving Turkey, Iran, and the al-Assad regime.

Turkey’s new alliance with al-Assad is a major turn-about, something that would have been unthinkable even just a few months ago.

Finding a solution is the most important thing for us. It is important that no more people die. If we are going to save those people, to heel the bleeding wound, the rest are [irrelevant] details. All the rest could be talked through and a solution could be found. As I said, al-Assad cannot be a uniting figure in Syria in the long run, it is just not possible. The main countries involved – the U.S., Russia, Turkey, Saudi Arabia and others – should come together and Turkey should make more effort on that.

These things always sound so good when they come out of the mouths of politicians, don’t they? Then if you take a nap for three months, when you wake up and see what’s happened, you realize that everything they said was total nonsense.

From the point of view of Generational Dynamics, this change of policy is strongly counter-trend, and so is meaningless. There will never be a “peace deal” for Turkey, because al-Assad will never agree to “peace” as long as there are any Sunnis left in Syria to exterminate. Also, both al-Assad’s Shia/Alawites and Iran’s Shias are historic enemies of Turkey, and so the marriage of convenience will end up in divorce after the first major bump in the road.

The entire Mideast is headed for a major war involving the whole region, along Israeli-Arab fault line, the Sunni-Shia sectarian fault line, and various ethnic fault lines. When the war ends, there will be a great international peace conference attended by politicians from all the major nations, and they’ll decide all the new boundaries. At that point, in the distant future, the Kurds may or may not get their Kurdish state. Hurriyet (Ankara) and BBC