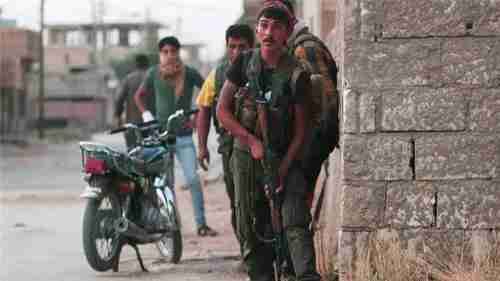 Everyone involved in the fight in Syria is making use of a convenient semi-fiction: Nominally, each one is there to fight the so-called Islamic State (IS or ISIS or ISIL or Daesh). The fight against ISIS is real, but it’s also a cover for other military activities.

Central to many of sub-conflicts are the Kurds, particularly Syria’s Kurdish militias (the Kurdish People’s Protection Units, or YPG).

What we’re seeing is a large convergence of forces in two Turkish border towns in northern Syria: Hasaka and Jarablus. The fight against ISIS in Hasaka has already involved several fighting forces with different objectives:

The fighting between the YPG forces and the al-Assad forces is the most violent since the war began in 2011. Syria’s deployment of warplanes against the Kurds was also a first, as was the American response with its own warplanes.

The YPG now controls large regions of northern Syria, including an uninterrupted 400 km (250 mile) stretch of the Syrian-Turkish border from the eastern frontier with Iraq to the Euphrates river, and a pocket of territory in northwestern Syria.

It is no secret that the Kurds would like to take control of the region in between those two, and create an independent state called Rojava. This is a nightmare scenario for both Turkey and the al-Assad regime. Daily Beast and Daily Sabah (Ankara) and The Hill

Turkey is assembling a force of 1,500 Syrian rebel fighters in the town of Gaziantep, preparing them to cross the border and launch an attack on ISIS in the strategic Syrian town of Jarablus.

The Kurdish militias, the YPG, are also making preparations for a final assault on ISIS around the same town, Jarablus.

Jarablus is a small town, but its importance lies in the fact that it lies right on the border with Turkey, and ISIS has been using it as a corridor to import supplies and people from Turkey. So it’s important to drive ISIS out of Jarablus in order cripple ISIS’s supply lines.

The YPG, backed by American warplanes, could take control of Jarablus from ISIS, but this would give the Kurds control of another significant region in northern Syria along the border with Turkey, and this is panicking Turkey.

Therefore, Turkey is assembling the 1,500 Free Syrian Army (FSA) fighters in Gaziantep to try to take control of Jarablus before the Kurds do. So that should be quite a battle.

According to an FSA spokesman, “The plan is to take Jarablus and expand south… so as to abort any attempt by the Kurds to move north… and so that Kurds don’t take more villages.”

There is another subtext to this. Recall that there was a “barbaric” terror attack on a wedding ceremony over the weekend, killing many dozens of people including many children. The attack was attributed to ISIS, and it’s triggered a furious response from Turkey. ( “22-Aug-16 World View — Turkey’s Erdogan announces a complete U-turn on Syria policy”)

The wedding terror attack occurred in Gaziantep, which is the same town in which Turkey is assembling the 1,500 FSA fighters. It’s possible that ISIS selected that town for the attack exactly because the FSA fighters were being assembled there.

Whatever happens in Jarablus, ISIS is sure to retaliate. AP and BBC