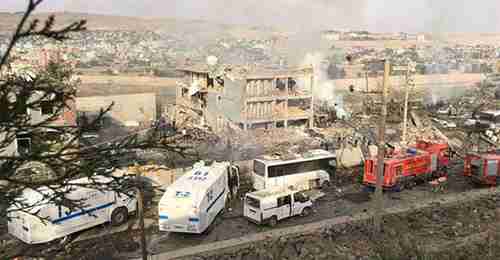 The terrorist Kurdistan Workers’ Party (PKK) took credit for a new deadly car bomb attack that occurred on Friday in Cizre in southeastern Turkey. A suicide bomber gammed a truck full of explosives into a checkpoint near a police station, killing at least 11 police officers and wounding 78 other people.

In hostilities with the PKK in the last year, more than 600 Turkish security personnel and thousands of PKK militants have been killed. Some 40,000 people have been killed since the conflict started in 1984.

Turkey is in a state of chaotic turmoil verging on instability. In the last week alone, Turkey suffered a huge terror attack at a wedding in Gaziantep, perpetrated by the so-called Islamic State (IS or ISIS or ISIL or Daesh), causing a major change in Turkey’s policy. ( “22-Aug-16 World View — Turkey’s Erdogan announces a complete U-turn on Syria policy”)

As we described yesterday, This U-turn has led to a major military invasion of northern Syria, around the town of Jarablus, attacking both ISIS and the Syrian Kurds.

So now, on Friday, there’s a major new terror attack.

No terrorist organization can enslave the Turkish Republic. We’ve declared all-out war against these terrorist groups. …

Like the Veteran [founder of modern Turkey, Mustafa Kemal Atatürk] said during the War of Independence: ‘Either independence or death.’

Turkey’s president Recep Tayyip Erdogan said, “This attack, which comes at a time when Turkey is engaged in an intense struggle against terrorist organizations both within and outside its borders, only serves to increase our determination as a country and a nation.”

If you look at the trend, you can see that these repeated terror attacks, combined with the failed July 15 coup attempt, are making the country increasingly belligerent. Friday’s terror attack comes just after an invasion of northern Syria, and now Yildirim is declaring “all-out war.” We may find out in the next few days what that means. Hurriyet (Ankara) and AP

After 50 days of violence, unrest in India-controlled Kashmir is unabated

After 50 days of violence, curfews and lockdowns, the unrest in India-controlled Kashmir shows no signs of letting up. More than 60 people have been killed and more than 5,000 injured in clashes with security police since the protests began on July 9. Many of the injured have been blinded, as security police have been shooting pellet guns at protesters, often into protesters’ eyes.

Indian-controlled Kashmir has a mostly Muslim-majority population, and new large anti-government protest marches were scheduled to begin after Friday prayers. India took a number of steps to prevent violence from occurring:

Although the marches didn’t take place, there were numerous protests and clashes across the whole region.

The violence and protests show no signs of abating, and it appears to be spiraling into full-scale violence.

From the point of view of Generational Dynamics, the growth in violence appears more and more to be following a similar path to what happened in India’s previous two generational crisis wars — the 1857 Indian Rebellion and the 1947 Partition War. ( “9-Aug-16 World View — Quetta Pakistan terror attack kills 75, while unrest grows in Kashmir”)

The Pakistan reaction to the growing violence is to encourage the separatists and incite more violence. The India reaction to the growing violence is to deploy more forces and use bullet and pellet guns coupled with curfews and restrictions. If there is anything going on, in either Pakistan or India, that might be doing anything to ease the unrest in Kashmir, so that a major new war won’t occur, I’m not aware of it. Tribune India and Al-Jazeera and Only Kashmir