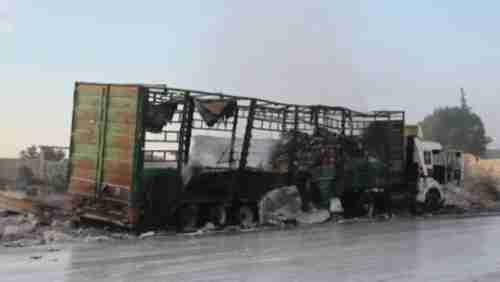 Warplanes on Monday targeted a clearly identified United Nations and Red Crescent aid convoy bringing food, medicines and other humanitarian aid intended for eastern Aleppo in Syria, where an estimated 250,000 civilians have been short of food, medicine and water. At least 18 of 31 trucks in a U.N. and Syrian Arab Red Crescent (SARC) convoy were hit, along with a SARC warehouse. Omar Barakat, the director of the Red Crescent’s Urum al-Kubra branch near Aleppo, was killed, along with 12 aid workers and dozens of civilians.

U.N. aid chief Stephen O’Brien said, “Notification of the convoy… had been provided to all parties to the conflict and the convoy was clearly marked as humanitarian.”

The aid convoy was almost certainly struck by warplanes of the regime of Syria’s president Bashar al-Assad, although officially investigators are saying that the warplanes could have been either Russian or Syrian.

Russian officials immediately claimed that the strikes were perpetrated by “terrorists,” but the only Syrian “terrorist” with warplanes belong to Bashar al-Assad.

This is reminiscent of the time when Russians in eastern Ukraine shot down Malaysian Airlines flight 17 airliner with a Russian Buk missile in 2014, and then bragged about it on Twitter, after which the Russian trolls moved into action to claim that Nato had shot airliner down to embarrass Russia. Reuters and CNN and Syria Direct (Lebanon)

Led by the US, more people are openly expressing total disgust with Bashar al-Assad

As I frequently point out, almost every day something new happens that a few years ago you would have to have been crazy to believe would ever happen. This past week, the most bizarre occurrence was that the US and Russia decided to cooperate on a ceasefire — after two previous failures — which had zero chance of working because Bashar al-Assad said that he intended to continue.

The Bashar al-Assad regime has used Sarin gas on its own population, with impunity. The regime has continued to use chemical weapons. Regime helicopters drop huge barrel bombs onto civilian neighborhoods. The barrel bombs may contain explosives, screws, nails and other shrapnel, plus canisters of chlorine and ammonia. When chlorine is inhaled, it reacts with the moisture in the lungs, turning into hydrochloric acid that literally burns the target to death from the inside out. Al-Assad has conducted “industrial strength” torture on tens of thousands of ordinary civilians over the past decade.

This man, Bashar al-Assad, is almost beyond belief in his depraved psychopathy. But whenever I refer to him as a “genocidal monster,” some of his trolls comment that he is a great, wonderful man, even if he has a fault or two. Nothing surprises me any more, but I do wonder about these trolls selling their souls every day to glorify an evil monster just to get paid a few dollars a day.

Western officials have always remained “cautious” about criticizing al-Assad, because they hoped that if they were nice to him then he would stop having his warplanes kill sleeping children in their dormitories. But anyone who has been nice to al-Assad has never been anything but a useful idiot, providing cover to al-Assad for more atrocities.

But now, after regime warplanes struck the aid convoy on Monday, officials seem more willing to criticize al-Assad. Actually, it’s a lot more than that. After years of pent-up anger from being “nice” to al-Assad, there have now been bursts of fury.

US State Department spokesman John Kirby said to the BBC (my transcription):

Syria is now a shame, a stain for the international community. To accept that there is a city… where the population is starving, with humanitarian convoys attacked, with chemical weapons used and with children who become victims every day — it’s the responsibility of the entire world.

However, the gold medal for letting loose absolutely fury goes to outgoing United Nations Secretary-General Ban Ki-moon, who said the following to the UN General Assembly on Tuesday:

Powerful patrons that keep feeding the war also have blood on their hands. Present in this hall today are representatives of governments that have ignored, facilitated, funded, participated, or even planned and carried out atrocities, inflicted by all sides of the Syria conflict against Syrian civilians. Just when we think it can’t get any worse the bar of depravity sinks lower. Many groups have killed many innocents — but none more so than the government of Syria, which continues to barrel bomb neighborhoods and systematically torture thousands of detainees.

Why is anyone even surprised that the al-Assad blew up the aid convoy? Al-Assad has repeatedly made clear that he wanted to siege, starve and kill all the civilians in Aleppo, since he’s under the delusion that this will end all anti-government protests, just like his father Hafez who perpetrated similar atrocities in 1982.

Bashar al-Assad has repeated made it clear that he wants to kill all the “terrorists” — by which he means all the Sunni Muslim civilians, whom he considers to be cockroaches to be exterminated. When the bizarre ceasefire plan was first announced, al-Assad said:

We as a nation… are delivering a message that the Syrian state is determined to recover all regions from the terrorists and restore security, infrastructure, and everything else that was destroyed in both human and material aspects.

In other words, al-Assad, who has become delusional, has made it clear that he will attain total victor, and won’t stop committing atrocities until then. That was obvious from day one. So what the hell was this moronic “ceasefire” supposed to be about? AP and NBC News