By a razor-thin margin, the Colombian people have rejected a peace deal that would have allowed one of the nation’s oldest narco-terrorist groups, the Revolutionary Armed Forces of Colombia (FARC), to establish its own political party with drug money and many of its leaders to avoid prison time for human rights violations.

With 50.24 percent of the vote, the Colombian people voted “no” on accepting a peace deal that would legitimize the Revolutionary Armed Forces of Colombia (FARC); 49.76 voted “yes” to the deal. According to Colombia’s RCN, the “no” vote prevailed in the nation’s mountainous interior, where the FARC have committed most of its crimes. (The orange states voted “no.”): 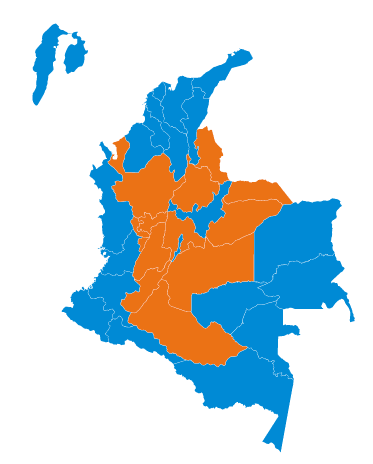 President Juan Manuel Santos brokered a deal with the leaders of the FARC last year from their safe haven in Cuba which, among other provisions, would have established a special tribunal for disarmed FARC terrorists, which would not have imprisoned terrorists who were found guilty of “political crimes.” The FARC, a half-century-old Marxist terror group guilty of killing at least 250,000 and “disappearing” another 100,000 during its lifetime, would be free to use drug trafficking money to fund political campaigns. Its leaders had expressed a desire to launch FARC candidates for the 2018 congressional elections.

In addition to political power, also off the table for FARC temporarily will be the removal from the State Department’s list of terrorist organizations, which Secretary of State Kerry had suggested as a possibility, and a visit from Pope Francis.

How both the government and the terrorist group will proceed in renegotiating a peace deal remains to be seen. FARC leader “Timochenko,” from Havana, said he fully intends to continue to promote the peace process. “The FARC maintain their will for peace and reiterate their disposition of using only their word as a weapon to construct the future,” he said following the “no” vote. He did not mention that FARC terrorists staged at least one violent attack on a polling booth in central Miraflores, Guaviare state.

“Nothing justifies allowing Timochenko to be allowed to be elected to the Senate or the Presidency, or ‘Joaquin Gómez’ to be elected governor of La Guajira,” opposition leader Senator Álvaro Uribe said of the deal. “No” supporters made their opposition to this potential scenario prominent, posting fake “Timochenko for President” billboards near major traffic centers.

“The FARC profoundly lament that the destructive powers sowing hatred and resentment have influence [sic] the Colombian people’s opinion,” Timochenko added. “We now know our challenge as a political movement is even greater and requires more strength to construct a stable and durable peace.”

President Santos, meanwhile, vowed to find an alternative path to “peace.” Sunday night, he said, “Tomorrow I will call a meeting of all the political forces, particularly those that supported the ‘no’ vote, to listen to them, open a space for dialogue and determine the path forward.”

The “yes” vote received the full force of the government’s marketing persuasion, culminating in an extraordinary event on September 26 in which Timochenko flew in from Havana, receiving a hero’s welcome, and both he and Santos signed the deal with a pen fashioned out of melted bullet steel.

The “no” contingency relied largely on social media support, led by Senator Uribe, best known as the former president largely responsible for the decimation of the FARC that forced their leaders to flee to Cuba. Uribe’s rallies attracted thousands who expressed alarm at granting the FARC impunity for their crimes, as well as reintegrating them into society.

Uribe has now become a key figure in any second attempt at a peace deal. Following the victory of the “no” vote, he said that he would accept a peace deal with the FARC as long as it preserved the dignity of the FARC’s victims. The Colombian newspaper El Tiempo has narrowed down the demands of the “no” side to five needs in any peace deal: a ban on the FARC leaders running for office; prison sentences for the FARC leaders; drug trafficking not treated as a lesser crime; reparations paid by the FARC to reconstruct the communities it has destroyed; and no violations of the Constitution to the benefit of the FARC.

Uribe’s contingency – the Democratic Center Party – the newspaper adds, would like to see the FARC use some of its millions in drug profit to benefit its victims.

In addition to murders, abductions, and disappearances, the FARC have forced thousands of children into terrorist activity as part of a Boko Haram-style child soldier program. The girls forced into this program are often raped and, as a result, forced into dangerous, unsanitary, and involuntary abortions.