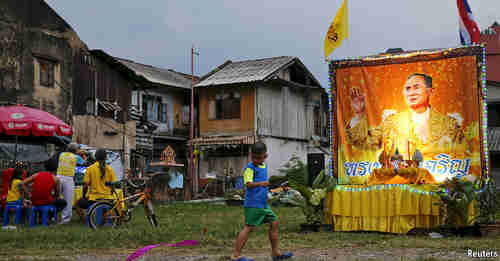 The 88-year-old King Bhumibol Adulyadej of Thailand has been in deteriorating health for several years, so his death could hardly have been completely unexpected. And yet, it’s surprising that the news stories coming out of Bangkok on Thursday after his death are of a shocked nation in mourning.

King Bhumibol, also known as Rama IX, was born on December 5, 1927, in Cambridge, Massachusetts. He has been on the throne since 1946, for 70 years, and so for almost every resident of Thailand, he has been ever-present as the King of Thailand. At his death, he was the longest-ruling monarch in the world. That title now passes to Queen Elizabeth of Britain.

The other surprising thing is that, even in death, it is illegal to say almost anything critical of the royal family. This is the so-called “lèse-majesté” law which says that it’s treason to insult the king. And people have been sent to jail for even minor criticisms. Countries around the world are advising any of their citizens visiting Thailand to avoid saying anything about the royal family or Thai politics at this time.

Bhumibol is revered today because he led the country through numerous crises, including several coups and military takeovers. Even today, Thailand is governed by a military junta that overthrew the democratically elected government in 2014, and Bhumibol’s influence is viewed by many as keeping the excesses of the military under control. Still, the army junta has made draconian use of the lèse-majesté as a tool for jailing dissidents.

The Cambodian war spilled over into Thailand in the form of a communist rebellion that began in the 1960s. King Bhumibol became an essential figure in the fight against the communists, although his role became more controversial in the savage anti-leftist coup of 1976, in which dozens of students were brutally killed by the security forces and royal-backed militias, and thousands forced to flee to seek sanctuary with the Communist Party. Despite his brutality, most Thai people look back at that time as central to upholding the authority of the state throughout the country. The Nation (Bangkok) and BBC and Public Radio International and AFP and BT (London) and Guardian (London)

In yesterday’s article, I discussed a pattern that many countries follow after a bloody generational crisis civil war between two ethnic groups. The civil war is so horrific that the survivors vow that it will never happen again. The first generation growing up after the civil war, and with no personal memory of its horrors, begin peacefully protesting. The country leader, often from ethnic group that “won” the civil war, stays in power and resists peaceful protesters with violence, using the excuse that he wants to prevent another ethnic civil war. This pattern is currently being followed in generational Awakening eras in Burundi, Syria, and South Sudan — and in Thailand.

In Thailand, the two ethnic groups are the minority light-skinned “yellow shirt” élite, mostly of Chinese descent, known as Thai-Chinese, versus the much larger population of dark-skinned “red shirt” mostly indigenous ethnic Thais, known as Thai-Thais. The indigenous Thai-Thais make up a majority of the population, and so they have been winning elections, much to the horror of the Thai-Chinese elite.

This exactly the kind of situation that gives rise to the Awakening era pattern described above. In this case, the Thai army have sided with the Thai-Chinese, and there have been three coups in the last ten years. In 2014, the army finally gave up even trying to hold elections, and they took control of the government, essentially giving control to the Thai-Chinese. King Bhumibol was a powerful influence in the last few years, keeping the excesses of the ruling junta under control.

With Bhumibol’s death, the next in line to be king is his 62-year-old son, Crown Prince Maha Vajiralongkorn. Vajiralongkorn has been married and divorced three times, has seven children, is considered to be a partying playboy, is currently living with an airline stewardess, and is deeply unpopular. He’s also thought to be aligned with the army, which will raise the anger of the large indigenous population.

With the loss of Bhumibol’s calming influence, it’s quite possible that we’ll see Thailand move in the direction towards genocide that we’ve been seeing in Burundi and Syria, where the leader commits genocide against the other ethnic group in order to protect the people from another war like the last one. That hasn’t started in Thailand yet, but it could happen, as some analysts are predicting that Thailand is headed for street protests, violent clashes, and other signs of increasing instability. LA Times and Economist (23-Jul) and International Business Times

Today’s musical entertainment: The March of the Siamese Children

The 1952 Rodgers and Hammerstein Broadway musical, “The King and I”, was based on the 1946 book “Anna and the King of Siam” by Margaret Landon. The story takes place in 1862 Bangkok Siam (Thailand). A teacher from Britain, Anna Owen, arrives in Bangkok to tutor the family of King Mongkut. She regrets her decision to go until she is charmed by King Mongkut’s children.

You must take three minutes off and watch “The March of the Siamese Children” from the 1956 movie “The King and I,” starring Deborah Kerr and Yul Brynner.