The estimated opium poppy plant production and its cultivation area in Afghanistan have increased more than 25-fold over the course of the ongoing war in the country to 4,800 metric tons and 201,000 hectares (ha), respectively, according to the United Nations.

Meanwhile, eradication efforts appear to have collapsed this year despite the estimated $8.5 billion in American taxpayer funds that the United States has already spent on anti-narcotics measures in Afghanistan since the war started in October 2001.

Each year, the UN Office on Drugs and Crime (UNODC) issues the Afghanistan Opium Survey to show production and cultivation trends of the deadly drug in the country, considered the world’s top producer of opium and its heroin derivative. 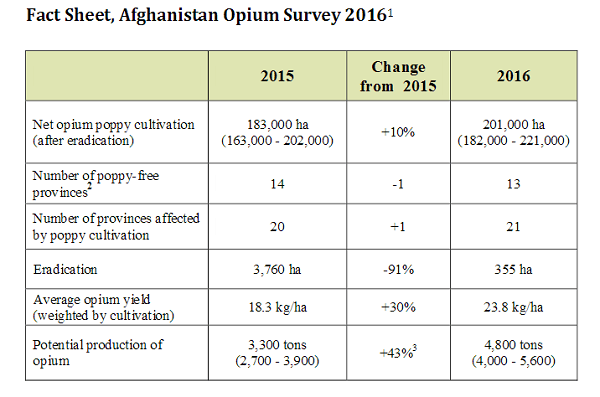 “The potential opium production in 2016 might be an underestimation,” acknowledges the UNODC, noting that it had to rely on satellite images to calculate estimates due to the worsening security conditions in top opium-producing regions.

According to the latest UN survey, since the U.S. invaded Afghanistan on October 7, 2001, the area under opium cultivation has increased nearly 25 times from 8,000 ha in 2001, when the ruling Taliban regime had imposed an opium ban across the country, to 201,000 ha this year, which is equivalent to an area more than 11 times the size of Washington, D.C.

Both the increase in cultivation area and the decrease in eradication efforts were attributed to deteriorating security conditions across the country. Taliban jihadists, who use proceeds from the sale of opium and heroin to fund their terrorist activities, are primarily responsible for the crumbling security conditions in Afghanistan. 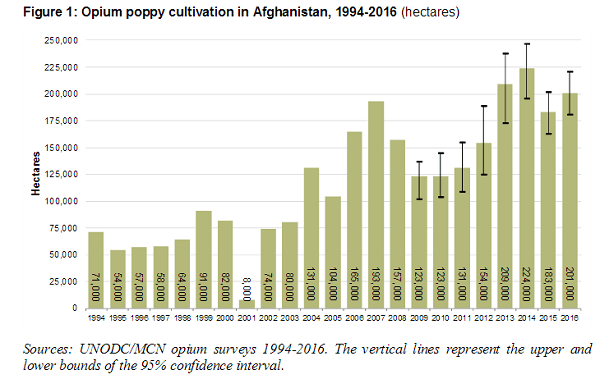 Meanwhile, estimated opium production shot up to 4,800 metric tons in 2016, from 185 tons when the U.S. invaded. The dramatic increase in opium production is reportedly not only the result of a larger area under cultivation but also due to the higher opium yield per hectare. 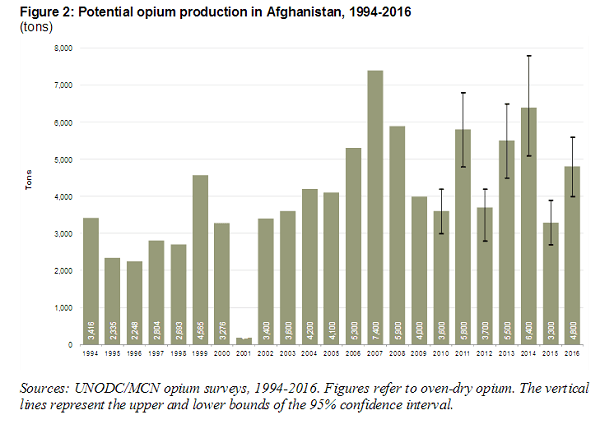 Opium production and cultivation have increased dramatically since 2015 alone, notes the latest survey. The UN reports that estimated production jumped 43 percent and cultivation rose 10 percent this year compared with 2015 levels.

Areas under cultivation this year marked the third-largest in two decades, following historic highs in 2013 and 2014.

UNODC Executive Director Yury Fedotov indicated that the most recent survey shows “a worrying reversal in efforts to combat the persistent problem of illicit drugs and their impact on development, health and security.”

Eradication efforts appear to have disappeared this year with an area of 355 ha uprooted, marking a 91 percent drop when compared to 3,760 ha in 2015.

Most (54 percent) of the opium in Afghanistan is cultivated and produced in southern provinces that border Pakistan and have historically been Taliban strongholds, namely Helmand and Kandahar, the deadliest provinces for U.S.-led coalition forces of the ongoing war.

Opium is cultivated and/or produced in nearly two-thirds (21) of the 34 provinces that make up Afghanistan, the UN reveals.

In its latest National Drug Threat Assessment, the DEA notes that only a small portion of Afghan heroin makes it into the U.S., smuggled primarily by Nigerian traffickers on commercial airlines.

In 2012, the latest year for which data is provided, Afghan heroin reportedly accounted for about four percent of estimated total weight of heroin seized in the United States.

The DEA acknowledges that most of the heroin flowing into Canada primarily originates in Afghanistan, but it maintains that Mexico and “to a lesser extent Colombia” are the top providers of the fatal drug in the United States.

Nevertheless, the White House and other government agencies have sounded the alarm on the Afghanistan heroin going into Canada, suggesting it may be flowing into the U.S.

Some American soldiers in Afghanistan have been investigated “on suspicion of using or distributing heroin, morphine or other opiates during 2010 and 2011,” the Associated Press (AP) pointed out in 2012.

Pentagon data analyzed by Breitbart News shows the number of U.S. service members testing positive for heroin has increased over the course of the war in Afghanistan.

In December 2014, the U.S. Special Inspector General for Afghanistan Reconstruction (SIGAR), reported that some U.S. taxpayer-funded reconstruction efforts, “such as improved irrigation, roads, and agricultural assistance,” may have contributed to the booming opium trade in Afghanistan.