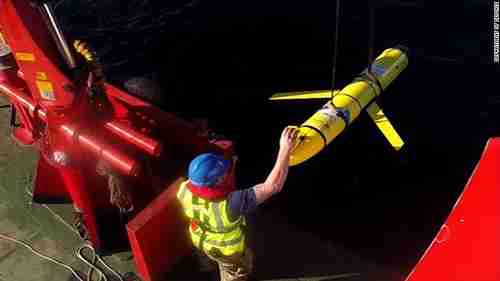 A drone similar to the one that was seized

China’s Defense Ministry said on Saturday that it will return to the United States an American military drone it seized in international waters in the South China Sea, near the Philippines. However, China has not yet returned the drone, and says only that it will return the drone “in an appropriate manner” at an unnamed time.

The Pentagon says that on Thursday, a Chinese naval ship approached the USNS Bowditch, an oceanographic survey vessel with a mostly civilian crew, which was trying to retrieve an American military drone that had been collecting unclassified data for oceanic research. A Chinese warship, a “submarine rescue vessel,” that had been following the Bowditch sent out a small boat and outran the Bowditch to capture the drone.

According to the US Defense Department, China intentionally captured a “sovereign immune vessel,” which is an act of war. The Chinese rushed to provide a laughable excuse, saying that the drone was captured “in order to prevent the device from causing harm to the safety of navigation and personnel of passing vessels.”

The drone was captured in waters near the Philippines, far from China. China has declared its intention to annex the entire South China Sea as its sovereign territory, even though its claims have been shown to be a hoax, and even though a judgment by the United Nations Permanent Court of Arbitration (PCA) in the Hague has made it clear that China was violating international law.

Chinese state media made it clear that the seizure was intentional. It quotes Li Jie, a Beijing-based naval expert:

According to one theory, China seized the US military drone to send a threatening message to US president-elect Donald Trump, after he accepted a phone call from Taiwan’s president Tsai Ing-wen on December 2. Trump has indicated that he is also reviewing America’s support for the “one China” policy, which says that Taiwan is a province of China.

China was forced to back down and promise to return the drone because not doing so could force a military response by the US. However, until China fulfills its promise and actually returns the drone, a military response remains a possibility. Washington Post and Xinhua and Global Times (Beijing) and Daily Beast

Anxieties about war have been raised in Taiwan after Chinese bombers twice circled around Taiwan’s periphery, though without entering the countries air defense identification zone (ADIZ).

Some people have speculated that this is one more act from Beijing, like the seizure of the US drone, to send a message in response to Donald Trump’s phone call with Taiwan’s president. However, that would seem an unlikely explanation, since the two actions by the Chinese bomber occurred on November 25 and December 10, with the first action occurring prior to the phone call.

However, Taiwan’s Ministry of National Defense on Sunday appealed for calm, as further concerns were raised this weekend when China’s air published a photo on social media showing a bomber flying above clouds with two mountain peaks in the distance, apparently depicting the November 25 flight. Chinese military commentators said that the peaks are of a mountain in Taiwan.

Military conflicts would occur between the Chinese mainland and Taiwan by 2020. It is quite possible that the mainland will take the island in one stroke.

However, another Chinese analyst is quoted as saying that China’s leadership might not favor reunification by force, which would hurt both sides’ interests. China Post (Taipei) and Global Times (Beijing)