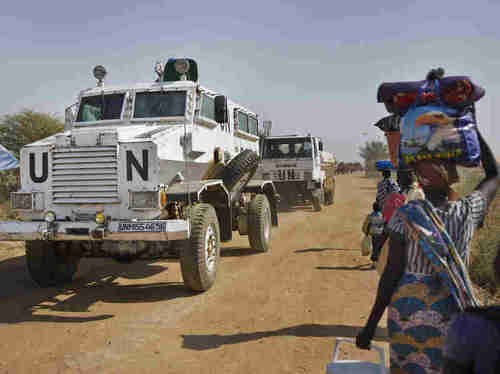 Humanitarian organizations are expressing outrage as the United Nations Security Council failed on Friday to pass a US-sponsored resolution to impose an arms embargo on South Sudan and placed a travel ban and asset freeze on three senior South Sudanese leaders.

According to the UNSC rules, for the resolution to pass it would have required 9 of the 15 members to vote in favor, and none of the 5 permanent members (US, UK, Russia, China, France) to veto it. As it turned out, those who opposed the measure needed only to abstain, since there were not 9 votes available to pass it. Japan, Russia, China, Angola, Malaysia, Venezuela, Egypt and Senegal all abstained.

South Sudan is the world’s youngest nation, having gained independence from Sudan in 2011. The region’s last generational crisis war was an ethnic war mainly between two tribes, the Nuer and the Dinka. That war climaxed with the “Bor Massacre,” which began on November 15, 1991. The Nuer army marched toward the provincial capital Bor and massacred the people of the Dinka tribe. Over the next three months, 2,000 civilians were killed, thousands more wounded, and at least 100,000 people fled the area. Famine followed the massacre, as looters burnt villages and raided cattle, resulting in the deaths of 25,000 more from starvation.

A new conflict began on December 15, 2013, led by the president Salva Kiir, of the Dinka tribe, fighting against forces led by vice president Riek Machar, of the Nuer tribe. Kiir and Machar signed a peace agreement in August 2015, but that did little good.

Human Rights Watch is expressing outrage that the UNSC resolution failed to pass. According to HRW, both sides have been importing weapons and using them to fight the other side. HRW says that African Union and UN investigators have documented war crimes, including killings and rape of civilians, and forced recruitment of children by the warring parties in South Sudan. In the last few months there has been an increase in incitement to violence, hate speech by senior leaders, and targeting of civilians, sometimes based on ethnicity.

Earlier this year, the Security Council adopted a resolution authorizing 4,000 troops from African nations to join 12,000 U.N. peacekeeping forces there. However, South Sudan’s president Salva Kiir rejected the peacekeeping troops to enter the country, saying that he would fight them as if they were an invading army. Those peacekeepers who did serve in South Sudan were withdrawn in the summer, after they were accused of failing to protect civilians from rape and sexual violence.

As an aside, you may wonder why decades of international aid to Africa has failed to have any effect whatsoever on poverty. The situation in South Sudan provides a good illustration of what happens. Usually the international aid goes into foreign bank accounts of leaders, but otherwise it’s spent on weapons to kill, rape and torture people opposing the leaders. Reuters and Human Rights Watch and NPR (11-Nov)

From the point of view of Generational Dynamics, Syria and South Sudan are in very similar generational eras, with leaders who are behaving in similar ways.

South Sudan’s last generational crisis war was an ethnic civil war between the Dinka versus the Nuer tribes, climaxing with the Bor Massacre in November, 1991, as described above. The Bor Massacre stands as a defining moment in the history of South Sudan. It was so shocking that it largely ended the war.

Syria’s last generational crisis war was a religious/ethnic civil war between the Shia Alawites versus the Sunnis. That war climaxed in February 1982 with the destruction of the town of Hama. There had been a massive uprising of the 400,000 mostly Sunni citizens of Hama against Syria’s Shia/Alawite president Hafez al-Assad, the current president’s father. He turned the town to rubble and killed or displaced hundreds of thousands. Hama stands as a defining moment in the Middle East. It was so shocking that it largely ended the war.

So both Syria and South Sudan today are in generational Awakening eras, as the first generation of children growing up after the previous crisis civil war come of age. These children did not personally experience the wars, but they listened to stories of how the other side committed massacres and rapes while their fathers were heroes who endured despite those atrocities. The children never hear about how their fathers also committed atrocities and rapes.

From a theoretical point of view, when a country goes through a civil war that’s also a generational crisis war, then as the first post-war generation grows up, the leaders become increasingly oppressive and violent towards peaceful opponents (usually a different religious or ethnic group), and use as an excuse the claim that they might start another civil war (which is almost impossible during a generational Awakening era). This is a generational pattern that’s followed over and over, in country after country, throughout history.

What we’re seeing in both Syria and South Sudan is a familiar pattern that I’ve described many times in countries like Burundi, Thailand, and Zimbabwe, starting 5-15 years after the climax of a generational ethnic crisis war. The leadership in the country, which represents one ethnic tribe or group, decides that in order to prevent a new civil war, it’s necessary to impose “security” by having the security forces commit atrocities against the other ethnic group.

There’s a wide spectrum of violence of this type. In Thailand, there’s been sporadic violence by the army, backing the “yellow shirt” market-dominant light-skinned Thai-Chinese elite minority against the the “red shirt” dark-skinned Thai-Thai indigenous ethnics, but so far the violence hasn’t been too serious.

In South Sudan, possibly the biggest driver of the war is not ethnic differences but oil. South Sudan has a wealth of oil, and all the warring parties would like to control as much of that oil as they can. A particularly interesting example of this is China, which is heavily invested in South Sudan and is supporting Salva Kiir. Chinese officials scream bloody murder when anyone complains about their massacring of Tibetans, saying that no one has the right to interfere in their internal affairs, but China has no hesitation to interfere in other countries’ internal affairs when their own interests are a stake.

Another parallel between Syria and South Sudan is that as genocide by the countries’ leaders continues right under the noses of everyone in the world, the United Nations is powerless to do anything about it because the two nations that fully support massacres, rapes, genocides and other atrocities are Russia and China, and they have veto power in the UN Security Council.

In Syria and South Sudan, in contrast to Thailand, the violence is reaching the highest levels, approaching full-scale genocide. What makes this difference from a crisis civil war is that in the latter case, the violence is “organic”, in that it comes from the people and cannot be stopped. In the case of Awakening era genocide, the violence could be stopped simply if the leader stopped massacring the opposition tribes, or if outside countries would stop supporting the genocidal acts. NPR and Sudan Tribune and Al Jazeera