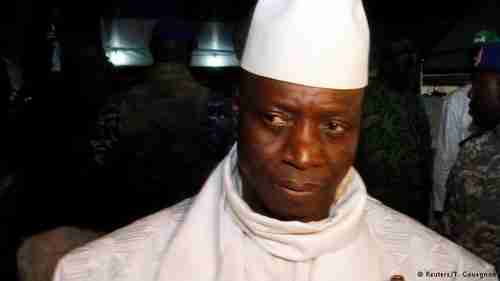 The Gambia’s president Yahya Jammeh is joining the ranks of national leaders, mostly African, who refuse to give up power after their terms are up, violating their national constitutions, and inflicting violence by the country’s armies and security forces on any opposition figures that protest.

Yahya Jammeh came to power through a military coup in 1994. Jammeh’s reign was authoritarian, intolerant and violent, with executions of political opponents. There were subsequent elections, and Jammeh always won them, but suspicions were great that Jammeh had rigged the elections.

So it was with some surprise that Jammeh lost the recent presidential election last month on December 1 to Adama Barrow, a businessman.

An even more shocking event occurred: Jammeh called Barrow and conceded the election, congratulating Barrow on his victory. Jammeh said that Barrow would become president on January 19, as called for in the constitution. This concession caused dancing in the streets in the capital city Banjul, and enormous relief in the international community, particularly among The Gambia’s neighbors in West Africa.

A week later, Jammeh reneged on his concession, declared that the election had been a fraud, and said that there would have to be a new election.

ECOWAS has meeting on Saturday to decide what to do. Senegal in particular has vowed that ECOWAS must do all it can to enforce an orderly succession of power on January 19, and has put forces on alert.

In a New Year’s statement on January 1, Jammeh called the ECOWAS statement a “declaration of war”:

“‘‘What is clearly incontrovertible is the decision of ECOWAS to implement the results of the December 1st 2016 election results by whatever means possible. It is totally illegal as it violates the principle of non-interference in the internal affairs of member states, which is an entrenched clause in the ECOWAS treaty.

It is in effect a declaration of war and an insult to our constitution. It is therefore absolutely unacceptable. This blatant, impartial and one-dimensional approach clearly indicates that the role of ECOWAS is not predicated on the pursuit of justice in the resolution of this stalemate.”

According to Alexander Yearsley, Managing Director of Martello Risk, with 20 years of experience conducting field and forensic investigations across Africa, Jammeh is recruiting mercenaries to fight in a possible with ECOWAS. Yearsley refers to Charles Taylor, the former dictator of Liberia, who was convicted of war crimes during the Sierra Leone civil war for terror, murder and rape. Yearsley says that the same people who fought for and against Charles Taylor are now being recruited as mercenaries by Yahya Jammeh of The Gambia (my transcription):

From what we’re being told by people who are attending some of these recruitment meetings, a senior figure who used to be in the Taylor fighting setup – they will phone their own contacts, their networks, and they will explain the situation, how much money will be offered on a daily rate, what fighters they need. And they’re recruiting across the boards – their former enemies – they are happy down differences and for $100 a day, they will be getting some very experienced fighters that know how to operate.

Yearsley’s claims are supported by a former Liberian army commanded who used to fight for Charles Taylor: “Jammeh is ready to fight to the teeth and spend money to stay in power.” Reuters and Africa News and Jollof News (The Gambia) and Deutsche Welle

Joseph Kabila became president of the Democratic Republic of Congo (DRC) in 2001, when his father was assassinated. He’s been reelected to office, but his final term in office ended last month on December 19.

Joseph Kabila pulled a stunt that can only be described as mind-boggling. He claims that he can’t step down because there haven’t been any elections to select a president to replace him. There were supposed to be elections in November but they weren’t held. His political opponents said that they weren’t held because Kabila refused to budget the money to hold the elections.

So that’s the situation. He’ll do everything he can to prevent elections from being held, and so he won’t have to step down because there’s no replacement.

African leaders are always complaining the Europeans and Americans don’t take them seriously, but they have only themselves to blame when you see this kind of nonsense occurring almost every week. Whether in Zimbabwe, Burundi, South Sudan, or The Gambia — and let’s not forge Syria, which is not an African country — leaders use everything from torture and rape and jailing to wholesale genocide to stay in power.

In DRC last month, there was a threat of civil war, but the Catholic Church intervened and brokered an agreement: Elections will be held in December of 2017 to choose Kabila’s successor, and this time, Kabila will really, really, really, really have to step down. This farcical agreement was signed by members of Kabila’s government, but it wasn’t even signed by Kabila himself. All Africa and Daily News (Zimbabwe)