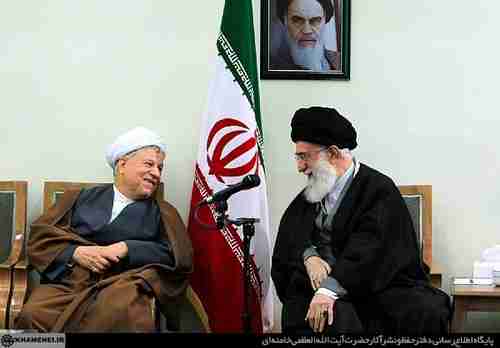 Hashemi Rafsanjani (L) shares a laugh with Supreme Leader Ali Khamenei, under a photo of the original Supreme Leader, Rouhollah Khomeini. All three fought together in the 1979 revolution.

Iran is mourning the death of 82-year-old Ali Akbar Hashemi Rafsanjani, born in 1934, and a key figure in Iran’s Great Islamic revolution of 1979. He was jailed several times by the Shah of Iran during the 1960s-70s for his political activism, and then after the revolution he became the second most powerful man in Iran, behind Ayatollah Rouhollah Khomeini, who ruled Iran as Supreme Leader until his death in 1989.

Khomeini’s chosen successor was Ayatollah Seyed Ali Khamenei, the current Supreme Leader. After Rafsanjani was passed over for Supreme Leader, his star began to fade, although he was elected to the presidency from 1989 to 1997.

Politicians in Iran are generally categorized into three groups:

There was a serious split between Rafsanjani and Khamenei after the 2009 presidential elections, when young people were protesting, and there was blood running in the streets because Iran’s security forces were massacring students and other protesters. Khamenei wanted the security forces to be completely unleashed, so they could kill, torture, rape, jail and bash anyone they wanted, with impunity. Rafsanjani wanted to permit peaceful protests, and wanted the jailed protesters to be released. As a result of the split between Rafsanjani and Khamenei, two of Rafsanjani’s children were jailed on separate charges. Rafsanjani’s daughter, Faezeh Hashemi, got herself into even more legal trouble while on leave from prison by visiting a leader of Iran’s persecuted Bahai religious minority. Mehr News (Tehran) and BBC (28-May-2016)

Is Rafsanjani’s death a victory for Iran’s hardliners?

Many analysts are calling Rafsanjani’s death a victory for Khamenei and the hardline principlists, because he will no longer be able to exert moderating pressure on them. That is one way of looking at the situation.

The other way of looking at it is that it is a victory for the young reformists, because he will no longer be able to exert a moderating pressure on them. In other words, in this view Rafsanjani was a powerful buffer between the two extremes, and without him they will both be free to pursue more radical policies. His death might even be the trigger for an Awakening era climax.

Generational Dynamics cannot predict short-term politics, but in many cases it can predict long-term trends, and in this case the long-term trend is clear. The old hardline geezers are dying off, and the young reformists are growing in number and gaining power.

As I’ve pointed out many times, Iranian college students started holding pro-Western and pro-American protests in the late 1990s, and continuing into the 2000s. These protests were quashed by Khamenei, who ordered the security forces to bash any students that expressed any opposition opinions.

But by the year 2017, those students are now 30-40 years old, and they are increasingly in positions of power, making reformist decisions and implementing reformist policies. And by the way, this is also true within the ranks of the Islamic Revolutionary Guards Corps (IRGC).

By contrast, the old geezer hardliners are dying off or are becoming senile, and are less and less able to exert decisions as they used to. Rafsanjani was a moderate and a pragmatist, but he was also well-respected by everyone, and could influence moderation in both extremes. Without his moderating influence, we can expect the generational differences between the reformists and the principlists.