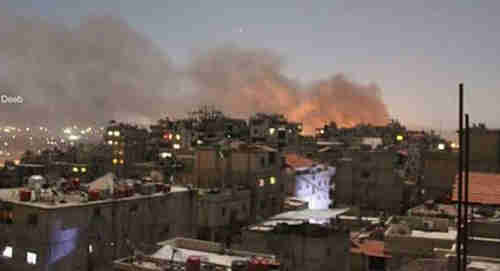 Huge explosions could be seen above the buildings of Damascus

The Syrian army said that Israel has launched a missile strike on the al-Mazzeh military airport west of Damascus early on Friday morning. The army said it was a “flagrant attack” by Israel with the purpose of aiding the “terrorist groups” in Syria. According to the army statement:

Syrian army command and armed forces warn Israel of the repercussions of the flagrant attack and stresses its continued fight against (this) terrorism and amputate the arms of the perpetrators.

Syrian state television quoted the army as saying several rockets were fired from an area near Lake Tiberias in northern Israel just after midnight. The report said that the rockets landed in the military compound of the airbase, causing explosions and a large fire. Other reports were contradictory, saying that the Israeli attack was from missiles launched from Israeli warplanes.

Syria says that there have been several such attacks in the past, and that they all coincided with defeats for the armed terrorist groups in Syria, especially Jabhat al-Nusra (al-Nusra Front), which recently changed its name to Jabhat Fateh al-Sham (JFS, Front for the Conquest of Syria). Syria said that the purpose of the attack was to “raise morale” of the terrorist organizations who are attempting to overthrow the regime of Syria’s president Bashar al-Assad.

Syria has sent letters to the United Nations demanding international retaliation against Israel:

The new Israeli missile attack on Mazzeh military airport west of Damascus comes within a long series of Israeli attacks since the beginning of the terrorist war on the sovereignty, territorial integrity and independence of Syria which has been planned in the Israeli, French and British intelligence agencies and their agents in Saudi Arabia, Turkey, Qatar and other countries that wanted to impose control and hegemony on Syria and the region.

Iran’s media added to the charges by claiming that Israel was attempting to prevent Syria’s army from restoring water supplies to Damascus. SANA (Syria) and Jerusalem Post and Press TV (Tehran)

Israel’s motive was probably to prevent weapons from reaching Hezbollah

As is their usual practice, Israel has neither confirmed nor denied that the attack took place. Some analysts are saying that the large explosions occurred because the target of the attacks was several large weapons stores. Syria’s army was using to those weapons to attack rebels in Syria, but it is possible that Israel believed that some of those weapons were to be transferred to Lebanon’s Iran-backed terrorist group Hezbollah.

Israel and Hezbollah fought a war in 2006 that largely ended in stalemate. However, it is known that Iran has been supplying rockets and other weapons to Hezbollah in preparation for the next war. Israel has taken steps where possible to prevent other weapons from reaching Hezbollah. Missiles and chemical weapons from Syria are particular concerns.

Hezbollah’s major arms supply route between Damascus and Lebanon’s border has been targeted on several occasions in recent years by Israeli air strikes. This has included strikes on warehouses and convoys of weapons. Reuters and Israel National News and Middle East Monitor