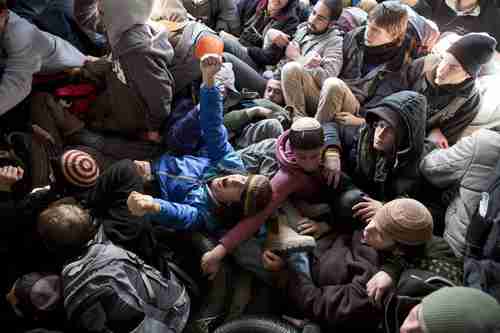 Jewish settlers lock arms inside a house as Israeli security forces try to evict them. (EPA)

Under court order, Israeli security forces began on Wednesday the forced eviction of settlers from the Amona settlement in the West Bank.

In 2014, Israel’s High Court ruled that the Jewish settlement had been built on private Palestinian land, and that the settlement was illegal. The court ordered the government to evacuate and demolish the community by December 25, 2016. But under fierce pressure from settlers and their Knesset supporters, the government in late December secured a 45-day extension from the court until February 8.

Israel’s government had hoped that the expulsion would go smoothly, as they had made an agreement that the evacuated settlers could move to an adjacent plot of land on the same hilltop as Amona. However, local Palestinians objected to this plan, saying that the adjacent plot was also privately owned by Palestinians, and an Israeli human rights group Yesh Din petitioned the court on behalf of the Palestinians to prevent this agreement. Last month, the court agreed with the Palestinians, and issued a temporary injunction halting the construction of the new settlements.

So Israel’s government had to back off from the offer of the adjacent settlement, and replaced it with an offer to move to the Ofra settlement, which was farther away but was considered legal under Israeli law. This new offer was considered unacceptable by Amona residents, although it was finally accepted on Wednesday.

Amona activists set up makeshift roadblocks and other defenses, as an army of thousands of unarmed police officers on Wednesday came to Amona to carry out the evacuation and demolition orders. By Wednesday evening, 20 police officers were injured and 12 protesters were arrested.

Pinchas Vallerstein, who represents the Jewish settlers, was unhappy about the evacuation, but said that it was necessary:

If you want to live in a democratic society and that’s important to you, you can disagree with a decision that the court makes, but at the end of the day, you have to live by it.

However, Abdulrahman Saleh, the mayor or a nearby Palestinian town, has little faith in Israel’s legal system. He says,

I feel the democracy in Israel is just for their people. But for Palestinians, either in [historical Palestine] or here – it is like [Syria’s president] Bashar al-Assad, it’s dictatorial. And for their people, it is 100 percent democracy.

Times of Israel and CS Monitor

The new settlement will have 3,000 homes. This is the third announcement of this type since Donald Trump became president on January 20. The previous announcements were for 2,500 housing units in the West Bank, and 550 in East Jerusalem. At the time that the 2,500 housing units were approved, Israel’s prime minister Benjamin Netanyahu said that the expansion was just a “first taste.”

Many people believe Netanyahu is pursuing an extremely aggressive new settlement building policy because Trump is more sympathetic to settlement construction than Barack Obama. According to Palestinian official Hanan Ashrawi:

The silence of the new American government, including those who actively support the settlements in the White House and the administration as a whole, has emboldened Netanyahu to persist with his settlement activities.

Israel claims that the new West Bank settlements are legal under international law, but many in the international community disagree, saying not only that they’re illegal but also that they’re a barrier to a “two-state” peace deal. This refers to the fantasy that there will be some kind of negotiation that will lead to an agreement that Israel and a Palestinian state will exist side-by-side in peace and harmony. Generational Dynamics predicts that Arabs and Jews will re-fight the 1948 genocidal war between Arabs and Jews that followed the partitioning of Palestine and the creation of the state of Israel. BBC and CNN and Jerusalem Post