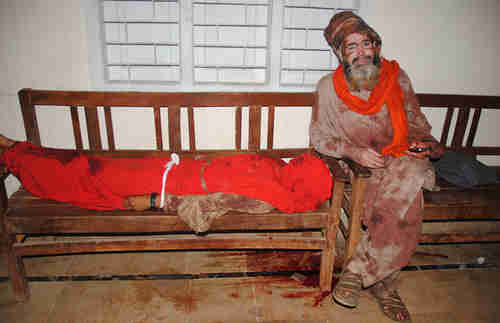 The people of Pakistan are once again expressing shock at the continuing string of violent terrorist attacks that target specific religious groups, including Sufis, Shia Muslims, and Christians.

On Thursday, a suicide bomber blew himself at a Sufi shrine, the Lal Shahbaz Qalandar shrine in Sehwan, just north of Karachi, killing 76 people and injuring several hundred more. The shrine was targeted during a Sufi ritual called Dhamaal, when hundreds of devotees were present inside the premises of the mausoleum of the saint Lal Shahbaz Qalandar, which is the reason for huge numbers of casualties.

Jamaat ul-Ahrar (JuA, Assembly of Freedom) claimed responsibility. JuA has long been one of the terrorist groups under the umbrella group Tehrik-e-Taliban Pakistan (TTP). JuA split off from TTP in the middle of 2014 in a disagreement caused by TTP’s plans to hold peace talks with Pakistan’s government. JuA rejoined TTP in 2015, but has also declared allegiance to the so-called Islamic State (IS or ISIS or ISIL or Daesh). For that reason, ISIS is also claiming responsibility for the attack.

On March 15, 2015, JuA claimed responsibility for suicide bombers at two churches, one Catholic and one Protestant, also in Lahore, killing 15 people and injuring 70. Dawn (Pakistan) and BBC and AP

On Monday, a strong explosion at Chairing Cross in Lahore, Pakistan, killed at least 16 people and injured 73 more. The incident occurred as hundreds of pharmacists were gathered to protest a new regulatory law. Some analysts claim that the intended target was not the pharmacists but the police guarding the protest. Jamaat ul-Ahrar (JuA, Assembly of Freedom) took credit for Sunday’s explosion in Lahore.

On March 27 of last year, JuA took credit for the Easter massacre of Christians in Lahore in a terror attack. That attack killed more than 69 people, mostly women and children, and injured more than 300. That attack was supposed to kill Christians, but as it turned out, most of the people killed were Muslims. At the time, a JuA spokesman issued a statement: “Members of the Christian community who were celebrating Easter today were our prime target. [However,] we didn’t want to kill women and children. Our targets were male members of the Christian community.”

There have been several terror attacks in the last week. On Sunday a newsman was killed when his van was attacked. On Wednesday, three suicide bombers killed seven people when they targeted villages around Peshawar in northwest Pakistan. Daily Pakistan and Geo TV (Pakistan)

In what has become a regular ritual, the government of Pakistan is once again declaring war on the Taliban. According to critics, the government only follows through half-heartedly on such announcements, distinguishing “the good Taliban,” which attacks targets in India, from “the bad Taliban,” which attacks targets in Pakistan. Often, the same group is involved in both kinds of attacks.

Speaking on Thursday, the Chief of Army Staff (COAS) General Qamar Javed Bajwa promised that each drop of blood will be avenged:

Each drop of nation’s blood shall be avenged, and revenged immediately. No more restraint for anyone…

The active cooperation among the valorous citizen of the country, the Army, Law Enforcement Agencies (LEAs) and intelligence agencies is cornerstone of Pakistan’s success against terrorism.

The terrorists are trying to regroup in safe havens in Afghanistan and are attempting to spread doubts and despondency in the society, hence we all collectively shall fail their desperate maneuvers.

Hostile agencies should avoid playing with regional peace and stability as we reserve the right to respond, despite our current policy of restraint.