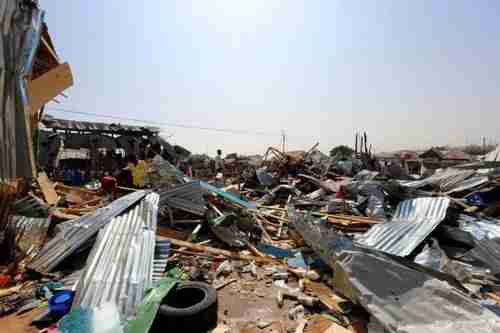 A terrorist car bomb exploded in a marketplace in Somalia’s capital city Mogadishu on Sunday, killing 39 and injuring dozens more.

No one has claimed responsibility, but the al-Qaeda linked terror group al-Shabaab has been responsible for numerous terrorist attacks in Somalia. Although al-Shabaab did not claim responsibility, a senior al-Shabaab official threatened more attacks targeting any clans that collaborate with the new president, saying “We will fight against him during his four-year term.”

The new president, who took office on February 8, is Mohamed Abdullahi Mohamed, nicknamed Farmajo. Farmajo holds a dual Somali-American citizenship. In 1988, as a Somali government employee working in the Somali embassy in Washington, he feared for his life after criticizing the Somali government, and applied for asylum in the U.S. Since then, he earned several college degrees and settled in Buffalo, NY, as a civil servant in the New York Department of Transportation.

His ambition was to return to Somalia and help bring peace to the violent country. After meeting with and impressing Somalia’s president in 2010, he became prime minister of Somalia. His fight against both al-Shabaab and corruption made him very popular in his home country. Five years later he ran for president, winning a surprise victory, and took office two weeks ago, on February 8.

Beyond terror attacks, Farmajo will have to deal with many other severe problems facing Somalia. Somalia’s clans have been fighting in a civil war since 1991, and a severe drought puts the country at risk of famine.

Farmajo’s popularity, his American dual citizenship, and his education in American values and governance apparently have made him a huge threat to al-Shabaab, and we can apparently expect more terror attacks targeting people and clans cooperating with Farmajo. AFP and VOA and Politico

As in previous operations, the Carl Vinson will simply transit the South China Sea, establishing the right of all nations to do the same, and especially for commercial ships to do so freely. Chinese media claim, without providing a reason, that these freedom of navigation operations are a military threat to China.

These operations have been going on for years, but there is a question about whether there will be a change in policy under the administration of president Donald Trump. The issue is how close the Carl Vinson will navigate to China’s artificial islands and military bases. In the Obama administration, the American ships stayed at least 12 nautical miles from any of China’s artificial islands. There is some speculation that, in the Trump administration, the American ships will travel closer than 12 nautical miles. This would be fully justified under international law, since the artificial islands are illegal, but it would infuriate the Chinese, and possibly trigger some kind of military confrontation. VOA and Navy Times (12-Feb) and Global Times (Beijing)

Iraq’s army, backed by American-led coalition warplanes, launched a major new military offensive on Sunday with the objective of recapturing western Mosul from the so-called Islamic State (IS or ISIS or ISIL or Daesh).

Iraq had hoped to recapture the entire city by the end of 2016, but only recaptured the eastern portion last month.

Humanitarian agencies are gearing up to aid 250,000 to 400,000 civilians who may flee because of the fighting. AP