Pakistan blames Afghanistan after a week of multiple terror attacks 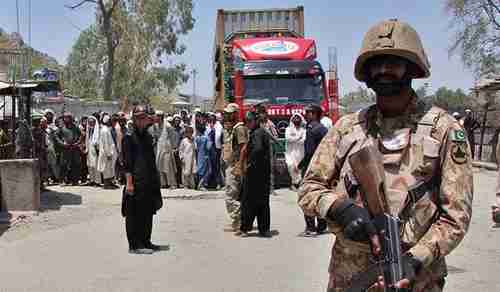 People and trucks wait for the Pak-Afghan border to be reopened, as Pakistan’s army moves heavy artillery to the border

The number of terrorist attacks in Pakistan had been falling in 2015 and 2016, compared to previous years, and Prime Minister Nawaz Sharif had promised that the year 2017 would be a further improvement. That is why a new surge in terror attacks in Pakistan has shocked the nation and is a personal embarrassment to Sharif.

Six terror attacks occurred in the space of four days:

There were other terrorist attacks earlier in the year, including a bomb in a vegetable market in Pakistan’s tribal region on January 21, kill 25 civilians and injuring 87 more.

In 2014, Pakistan’s military launched Operation Zarb-e-Azb, which attacked Taliban militants hiding in the tribal region (FATA) between Pakistan and Afghanistan. Pakistani government officials have credited Zarb-e-Azb as the reason why terror attacks in Pakistan fell in 2015 and 2016.

On February 13 of this year, the day of the terror attack in Lahore, Pakistan’s UN ambassador Maleeha Lodhi told the UN Security Council:

This comprehensive approach [Operation Zarb-e-Azb] has succeeded in expelling terrorist organizations from our territory and greatly constrained their ability to carry out lethal attacks, as evident from the dramatic decline in the number of such attacks, despite the cowardly attack in Lahore.

There is a certain irony to this claim: As the number of terror attacks in Pakistan declined in 2015, the number in Afghanistan increased. The two figures may well be linked because Operation Zarb-e-Azb caused thousands of Pakistani Taliban militants hiding out in the FATA to flee across the border into Afghanistan, where they could have linked up with the Afghan Taliban.

The rise of the Taliban in Afghanistan in 2015 had special geopolitical significance because the resurgent Taliban forced President Barack Obama to reverse his promise to withdraw all American troops from Afghanistan. BBC and South Asia Terrorism Portal (SATP – India) and Al-Jazeera

Tensions between Pakistan and Afghanistan are rising sharply as Pakistan is essentially blaming Afghanistan for the recent surge in terror attacks. Pakistan’s army is taking these steps following Thursday’s terror attack on the Sufi shrine in Sehwan:

Pakistan’s military chief, General Qamar Javed Bajwa, said on Monday that the army was fighting the “common enemy” of terrorism in Pakistan and Afghanistan, and he called “for more effective border coordination and cooperation” to prevent cross-border movement of terrorists.

Last week, Pakistan handed over to Afghanistan a list of 76 fugitive militants hiding in Afghanistan and demanded that immediate action be taken against them.

On Monday, Afghanistan handed over to Pakistan a list of 32 training centers and 85 militant leaders involved in terrorist attacks in Afghanistan, and demanded that immediate action be taken against them.

There have been similar lists in the past, and little or no action has been taken on either side. Whether this time will be different remains to be seen.