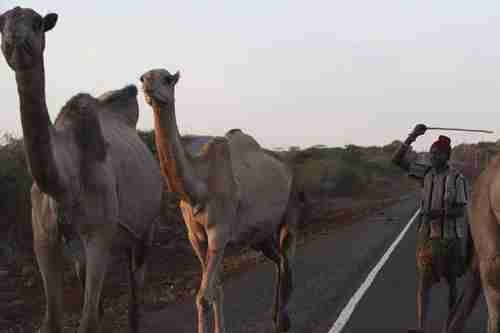 A herder walks home with his camels in Kenya in January, after walking kilometers in search of pasture and water during drought. (The Nation)

Ranch co-owner Tristan Voorspuy, a British citizen and former British army officer, was found shot dead on Sunday on his ranch in Laikipia province in Kenya. Alongside him was the dead carcass of the horse he had been riding. It’s believed that Voorspuy was ambushed by herders who for months have been invading ranches in order to get water and grazing land for their animals, in the middle of a drought.

Voorspuy was co-owner of the 24,000 acre colonial era Sosian ranch in Laikipia in the Rift Valley of Kenya, and owner of Offbeat Safaris Ltd. The ranch is a wildlife preserve and tourist attraction.

On Saturday, Voorspuy went to visit the site where two cottages had been burned down by herders on Friday. It appears that burning the cottages was a trap to lure Voorspuy, as he was apparently ambushed and killed when he arrived.

The perpetrators are believed to be from the Pokot and Samburu tribes. Both of these tribes are described as “pastoralists,” meaning that they are a society of nomadic herders who move from place to place as changes in weather require. The Pokot and Samburu tribes had fought a very bloody war against each other in 2006, displacing thousands of people and stealing each other’s livestock, but now they’ve apparently made up and they’re joining together to attack ranchers. It’s believed that heavily armed militias of thousands of Pokot and Samburu have been invading and attack ranches.

In January, herders attacked a 42,000-acre private ranch. According to a witness:

The entire property is being invaded by large numbers of armed people, overrunning it with cattle, sheep and goats. They have destroyed kilometers of fences, cut and stolen wires and dug out posts. Things become really bad yesterday. It is as if someone has been been paid to cut wire and pull out posts everywhere. We are getting reports from all parts of Laikipia that cattle are heading our way.

The ranches in this county are the last stronghold of wildlife outside Kenya’s national parks and reserves, and is home to 6,000 elephants and other animals including lions and the rare Grevy’s zebra.

Kenya’s last generational crisis war was the Mau-Mau rebellion that climaxed in 1956. In 2008, there was extremely brutal violence between the Kikuya, Kalenjin and Luo tribes, and it’s widely feared that the new round of attacks by herders on ranchers in Laikipia is the first sign of a new round of more widespread violence, and possibly a full-scale war. Nairobi News and The Star (Kenya) and IRIN – United Nations and The Nation (Kenya-31-Jan-2017)

The ranchers (farmers) versus the pastoralists (herders)

The genocidal war in Sudan’s western region of Darfur began in the 1980s as low-level conflicts between the light-skinned “Arab” herder tribes and the dark-skinned “African” farmer tribes. The herders turned into the Janjaweed militias who began, in the early 2000s, to ride in on camels and horses and invade the Darfurian farms with a scorched earth policy including mass murders, rapes, and genocide.

The iconic genocidal war between Hutus and Tutsis in Rwanda and Burundi in 1994 was the culmination of centuries of generational crisis wars between the two tribes, where the Tutsis were the herders who controlled the land, and the Hutus were the farmers who worked for the Tutsis.

The generational crisis civil war in the Central African Republic began three years ago as a war between ethnic groups aligned along a Muslim herder versus Christian farmer fault line. As we recently described, the war in the central regions of the country around the cities of Bambari and Bria is morphing from a religious war to an ethnic war between the Fulani tribe, a nomadic herding ethnic group, and the Gula and Runga tribes, which are primarily farming ethnic groups. As both sides are Muslim, this is now primarily an ethnic war. In fact, the Gula and Runga tribes are now allying with some Christian tribes that are also farmers.

In Kenya, the recent attacks by pastoralist herders on ranches is a variation of the age-old war between herders and farmers. Kenya’s last generational crisis war was the Mau-Mau rebellion that climaxed in 1956. Now, 61 years later, Kenya is going deeper into a generational Crisis era, and we can expect the war between pastoralists and ranchers, and even between different ethnic groups of pastoralists, to continue to worsen.