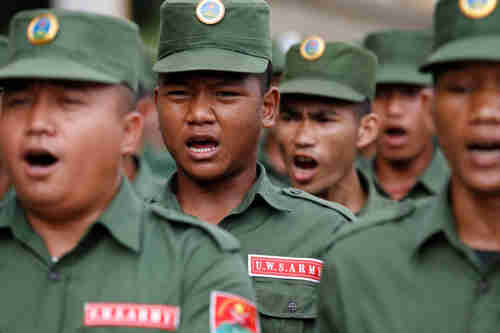 Thousands of Chinese-speaking ethnic Kokang people living in the Kokang region of Myanmar, along the border with China, have fled in panic across the border into China, to escape clashes between Myanmar’s military and Kokang’s Myanmar National Democratic Alliance Army (MNDAA). The Kokang MNDAA is one of four ethnic militias in the Northern Alliance, fighting the army. China is demanding that the army bring the region under control, but that’s unlikely to happen, since the army is one of the belligerents.

In October 2015, the government of Myanmar (Burma) concluded a peace agreement with its armed ethnic groups that had been under negotiation since 2011. According to the government rhetoric, the agreement was “bringing hope” that the entire country would soon be “at peace.” However, of the 15 armed ethnic groups in Burma, only eight signed the agreement, while the others indicated that they wished to continue fighting Burma’s army.

In November of last year, four of the non-signed formed the Northern Alliance and launched a series of violent attacks on military outposts and police stations across the northern part of the country. Tens of thousands of people have been forced to flee their homes, many crossing the border into China.

China’s army is on alert along the border with Myanmar, but it has not intervened so far. Instead, it is backing the United Wa State Army (UWSA), an organization with roots in the Communist Party of Burma, a militia with 20,000 members of the ethnic Wa community, and is supplying them with heavy weaponry.

One can only guess what China’s motivation is in supporting the UWSA, but, presumably, there are two objectives: bring about stability on the Myanmar side of the border, and use the UWSA to gain leverage against Myanmar’s government.

However, the clashes between the army and the MNDAA are continuing, and panicky civilians continue to flee across the border into China. Some analysts have expressed concern that this could spiral out of control into a larger war. Irrawaddy News (Myanmar) and Deutsche Welle and VOA and Asia Times

Myanmar faces an investigation for ethnic cleansing of Rohingya Muslims

Myanmar’s army says that it has halted “clearance operations,” which have been targeting Rohingya Muslims in Rakhine state and which the United Nations has called ethnic cleansing and possible crimes against humanity.

Myanmar’s army conducted a scorched earth attack on Rohingya Muslims burning down thousands of homes and buildings in dozens of villages. The army committed massacres, rapes and other atrocities that have displaced hundreds of thousands of people, with tens of thousands fleeing for their lives across the border into Bangladesh.

Burma has tacitly admitted guilt by forbidding any journalists or humanitarian groups from entering Rakhine State to investigate. Burma’s government agrees that the satellite images show that Rohingya villages are being burned down, but they make the laughable claim that the Rohingyas are burning down the villages themselves in order to embarrass the government. There have also been dozens of videos showing Burma’s police beating and raping Rohingya civilians, but Burma’s government claims that all of these videos are phony and have been fabricated.

The European Union is under growing pressure to lead an independent international investigation into the atrocities in Burma and is expected to sponsor a resolution on March 16 to the United Nations Human Rights Council.

According to Phil Robertson from Human Rights Watch’s Asia division, “It’s time for the soldiers on the ground committing these atrocities, and their superiors in command authority, to be held accountable, and that is precisely what the Human Rights Council is going to do.” Frontier Myanmar and Reuters (16-Feb)