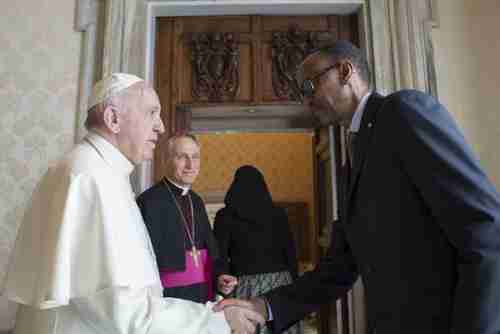 In 1994, there were two major ethnic groups in Rwanda: the Hutus and the Tutsis. They had lived together for decades, had intermarried, had their kids play games with each other and so forth.

The iconic genocidal war between Hutus and Tutsis in Rwanda and Burundi in 1994 was the culmination of centuries of generational crisis wars between the two tribes, where the Tutsis were the herders who controlled the land, and the Hutus were the farmers who worked for the Tutsis.

On April 6, a plane crash killed Juvenal Habyarimana, the president of Rwanda, a Hutu, when the plane was shot down by an unknown assailant. Next, a Hutu leader announced over the radio, “Cut down the tall trees,” referring to the Tutsis, who were generally taller than Hutus. The radio announcement, which was heard all over the country, was some sort of prearranged signal. On cue, each Hutu did something like the following: Picked up a machete, went to the Tutsi home next door, or down the street, murdered and dismembered the man and children, raped the wife and then murdered and dismembered her.

Close to a million Tutsis were tortured, raped and murdered in a three month period. From the point of view of Generational Dynamics, this is the purest modern example of an “organic” or “indigenous” genocide, as opposed to a government-ordered genocide such as is occurring today in Syria. And in Rwanda, it made no difference that almost everyone is Christian, mostly Catholic. All humans, of whatever religion, have the same DNA.

Since 1994, relations between Rwanda and the Vatican have been stormy, with the Tutsis accusing the Church of being close to the Hutus, and for having participated in the massacres. Although some Hutu clergy members helped the Tutsis, in other cases, Hutu clergy were perpetrators. In some cases, the Hutu clergy ushered Tutsis into church buildings, promising them security, and then allowed them to be slaughtered.

On Monday, Pope Francis met at the Vatican with Rwanda’s president Paul Kagame, and issued a statement apologizing on behalf of the Catholic Church for the Church’s involvement in the 1994 Rwanda genocide:

In this context, the Pope conveyed his profound sadness, and that of the Holy See and of the Church, for the genocide against the Tutsi. He expressed his solidarity with the victims and with those who continue to suffer the consequences of those tragic events and … he implored anew God’s forgiveness for the sins and failings of the Church and its members, among whom priests, and religious men and women who succumbed to hatred and violence, betraying their own evangelical mission. In light of the recent Holy Year of Mercy and of the Statement published by the Rwandan Bishops at its conclusion, the Pope also expressed the desire that this humble recognition of the failings of that period, which, unfortunately, disfigured the face of the Church, may contribute to a “purification of memory” and may promote, in hope and renewed trust, a future of peace, witnessing to the concrete possibility of living and working together, once the dignity of the human person and the common good are put at the centre.

Pope Francis referred to a statement published by the Rwandan Bishops on November 20, 2016:

We apologize for all the wrongs the Church committed. We apologize on behalf of all Christians for all forms of wrongs we committed. We regret that church members violated (their) oath of allegiance to God’s commandments…

Forgive us for the crime of hate in the country to the extent of also hating our colleagues because of their ethnicity. We didn’t show that we are one family but instead killed each other.

While the Bishops’ statement was welcomed last November, the government of Rwanda issued a stinging rebuke:

This step is welcome, as individual expressions of remorse. However, its profound inadequacy only serves to highlight how far the Catholic Church still remains from a full and honest reckoning with its moral and legal responsibilities.

First, as they apologize on behalf of a few unnamed individuals, the bishops appear to take the extraordinary step of exonerating the Catholic Church as a whole for any culpability in connection with the Genocide. Everything in the historical record contradicts this divisive claim…

Finally, given the scale of the crimes, there is ample justification for an apology from the Vatican, as has occurred repeatedly with other cases of lesser magnitude.

A century of genocides

It is to the credit of the Catholic Church that the Pope is willing to apologize for its part in the Rwanda genocide, even if it take over 20 years for the apology to occur.

However, the Rwanda genocide should remind us that what Generational Dynamics tells us is true: That when it comes to genocide, every ethnic group, every religious group, every geographic group, is the same as every other. Indeed, if some religious or ethnic group refused to commit genocide, then in a matter of one or two centuries they would be exterminated by another group that was not so fastidious.

People of the Muslim faith are most closely identified with atrocities in the current era, which is not surprising since almost every atrocity in the news these days is almost always perpetrated by some Sunni Muslim jihadist group. However, it is worth pointing out that of the 1.6 billion Muslims in the world, there is only a very small number, probably in the thousands or tens of thousands, that support the al-Qaeda and ISIS atrocities.

From the point of view of generational theory, this situation is attributable to the fact most Sunni Muslim countries are deep into a generation Crisis era, much more so than the Christian nations. The reason is that their last crisis war for many Sunni Muslim nations was not World War II, but was World War I, including the destruction of the Ottoman Empire. This means that there are absolutely no Sunni Muslim survivors remaining who remember the horrors and atrocities of WWI, and the younger generations have no fear of repeating them.

People who say that there is a war by Muslims against Christians are completely missing the point. It is true that jihadist groups sometimes target Christians, but these are almost always little more than gruesome publicity stunts. The number of Christians being killed by Muslims is minuscule compared to the number of Muslims being killed by Muslims. Jihadist groups linked to al-Qaeda or to the so-called Islamic State (IS or ISIS or ISIL or Daesh) are overwhelmingly targeting other Muslims, and rarely Christians.

The genocide being perpetrated by Syria’s president Bashar al-Assad serves as an example to distinguish between government-perpetrated atrocities, for which al-Assad is responsible, and “organic” atrocities, such as those committed by ISIS fighters or the Hutus in Rwanda. As I’ve been reporting many times over the last couple of years, al-Assad’s army is supporting him only half-heartedly, with massive numbers of desertions. Al-Assad himself said in 2015 that his army was near defeat, but was saved by the Russians. Syria is not in a generational Crisis era. It is in a generational Awakening era, and the public supports the war half-heartedly, just as the American public half-heartedly supported the Vietnam war in the 1960s.

From the point of view of generational theory, it is rare for a genocide or ethnic cleansing to be purely organic or government-led, but in an Awakening era, it is going to be almost completely government-led, while in a Crisis era, it will be “organic,” whether or not it is government led. In an Awakening era, the atrocities are often perpetrated by a leader who refused to lead office, such as we are seeing in Syria, Burundi, and Zimbabwe.

Two modern special cases are worth mentioning. In the Central African Republic (CAR), there are atrocities being committed on both sides, by both Muslims and Christians. CAR’s last crisis war climaxed in 1932, so the country is well into a generational Crisis era, and that affects both the Christian and Muslim population.

The other special case is occurring in Myanmar (Burma), in the early stages of a generational Crisis era, where Buddhists, led by Buddhist monk Ashin Wirathu and his “969 movement,” are conducting atrocities targeting the Rohingya Muslims, including rapes, torture and other atrocities committed by Buddhists, targeting the Rohingyas. The Rohingyas have a darker skin than Burmese, and they speak a Bengali dialect. The actions by the Buddhists were similar to the actions by the Nazis against the Jews.

So it’s good that the Catholic Church has apologized for its participation in the 1994 Rwanda genocide, although it took over 20 years for the apology to be forthcoming. Perhaps in another 20 years, some Muslim clerics will apologize for the atrocities being committed today in the name of Islam.