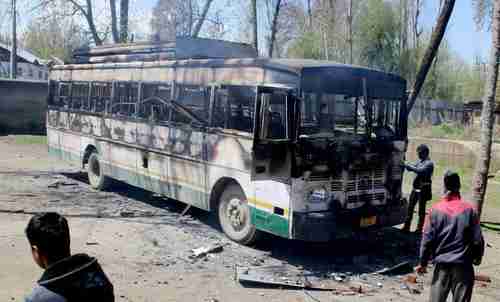 The large surge in violence left eight people dead and injured more than 100. Two middle schools, designated as polling stations, were burnt down on Sunday night.

Separatists had called for a boycott of the election, and in the city Srinagar were using barbed wire and burnt tires to block the roads, to prevent voters from reaching the polling stations. Hundreds of youth threw stones and petrol bombs at security forces, who wore helmets and carried batons to subdue the protesters. However, the security forces were forced to withdraw, after the boycott was almost total. Government sources counted nearly 200 separate incidents of violence.

Although there have been periods of violence in Indian-controlled Kashmir in the past, the new round of violence is significantly different according to several measures:

As I wrote in my detailed analysis earlier in the month, from the point of view of Generational Dynamics, Kashmir is replaying previous generations of violence according to a fairly standard template.

India’s previous two generational crisis wars were India’s 1857 Rebellion, which pitted Hindu nationalists against British colonists, and the 1947 Partition War, one of the bloodiest wars of the 20th century, pitting Hindus versus Muslims, following the partitioning of the Indian subcontinent into India and Pakistan.

The surging violence in Kashmir is extremely dangerous and spread and spiral into something much larger during the hot summer. BBC and New Delhi TV and First Post and India Times

Hindu activists push for ban on cow slaughter across India

It is an old saying that Hindus and Muslims cannot live together because Muslims can’t stand pigs and Hindus can’t eat cows. These differences, which seem so odd to the Western mind, raise such powerful emotions in both Muslims and Hindus that they played an important role in both of the previous generational crisis wars, the 1857 Rebellion and the 1947 Partition War.

Now there is a new demand by Hindu nationalists to ban cow slaughter across the country. Cow vigilantism has frequently triggered violence between Hindus and Muslims in India, especially when Muslims kill cows for meat, and preventing Muslims from eating beef appears to a major part of the motivation for the proposed ban on cow slaughter.

However, opponents of the ban say that a ban on cow slaughter would be bad for the cow and that the end result is that cows would no longer exist except in zoos. For that reason, opponents are demanding that if the proposed ban is passed, then the government must budget money to give to dairy farmers to protect the cow, and must provide an adoption scheme for cattle that are past productive age or male. First Post and Indian Express

Why is a US carrier group strike force going to the Korean peninsula?

In yesterday’s article, I described that the USS Carl Vinson aircraft carrier strike force left Singapore and headed for the Korean peninsula, possibly for some confrontation with North Korea, and I wondered what the objective was. In particular, I wondered how long the strike force was going to remain there.

A couple of readers have provided me with possible explanations. One readers said that the Carl Vinson would have to remain only until the Terminal High Altitude Area Defense (THAAD) system could be fully deployed in South Korea:

But they’re waiting for the next test launch of a potentially nuclear tipped missile by the North Korean’s insane dictator. Then they’ll shoot it out of the sky. A little target practice, shall we say. As they might say in Texas — “pull!”

See, the THAAD is just starting to be installed in South Korea, and obviously that takes some time, so it’s not ready yet. …

[The carrier strike force is] equipped with the Aegis variant of functionality quite similar to THAAD – just sea based. I know a bit about this, since I used to work for the Navy supplier FMC (now BAE Systems), who makes the Rail Gun and the 5-inch/54 caliber (Mk 45) lightweight gun.

And it’s a legitimate move to shoot down any such North Korean missile, even if it’s just a test. How do we know whether or not it’s just a test? Are we supposed to give it 10 minutes and see whether it’s trajectory is aimed at LA? Better shoot it down, just in case. … The carrier group serves as an interim THAAD until the full THAAD is installed and working. That will allow the Seoulians to sleep better at night (you said yourself that they’re getting a bit nervous).

Another reader pointed out that the birthday of the grandfather of the current leader is fast approaching, and the leader might be planning a major provocation on that date:

15 April is Kim Il-Sung’s birthday, and is a holiday in NK called “Day of the Sun” (“Il-Sung” in Korean means “become the Sun.”) The North Koreans have a history of staging provocations (missile and nuclear tests) so it’s likely the Vinson battle group will be on hand just in case Kim Jong-Un gets stroppy.