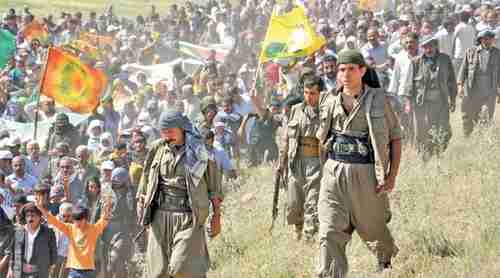 In Syria, Turkey’s warplanes struck Kurdish militias known as the People’s Protection Units, or YPG, who are allies of the US-led coalition fighting the so-called Islamic State (IS or ISIS or ISIL or Daesh). The YPG said that Turkey’s airstrikes killed 20 of its fighters and wounded 18 others, and caused extensive damage to YPG headquarters and nearby civilian property.

Although the US considers the YPG to be the most effective fighting force on the group against ISIS, Turkey considers them to be an extension of the Kurdistan Workers’ Party (PKK). The PKK have been conducting an anti-government insurgency in Turkey since 1978, and have conducted numerous terror attacks on civilian targets in Turkey.

The YPG denounced the airstrikes as “treacherous,” accusing Turkey of undermining the fight against ISIS. “By this attack, Turkey is trying to undermine the Raqqa operation, give ISIS time to reorganize and put in danger lives of thousands of [people].”

The strikes on Sinjar mountain are a new development. According to reports from Kurdish sources, one PKK fighter was killed, but the airstrikes also killed five Peshmerga and wounded nine others. The Peshmerga is the Kurdish Iraqi militia that are part of the effort to expel ISIS from Mosul.

The Kurdish Regional Government (KRG), which says that it is distinct from the PKK, condemned the airstrikes on Sinjar mountain, but also asked the PKK to leave the area.

The Iraqi parliament’s deputy speaker denounced the airstrikes in Sinjar, saying that they have no justification:

The air strikes will affect the relations between both countries and will spoil stability in the area while the Iraqi forces are launching operations against ISIS in Mosul.

A military statement from Turkey said that the airstrikes hit shelters, ammunition depots and key control centers, to prevent infiltration of Kurdish rebels, weapons, ammunition and explosives from those areas across the border into Turkey:

To destroy these terror hubs which threaten the security, unity and integrity of our country and our nation and as part of our rights based on international law, airstrikes have been carried out… and terrorist targets have been struck with success.

The statement said that dozens of militants were “neutralized.” AP and NRT TV (Kurdistan) and Deutsche Welle

At least 10 Turkish soldiers were killed in two separate attacks the PKK on Sunday, in the southeastern cities of Diyarbakir and Sirnak.

US State Dept. says that it’s ‘deeply concerned’ about the Turkish airstrikes

Turkey has long objected to the use of any Kurdish militias in the fight against ISIS in either Syria or Iraq, and has taken its own military action in Syria to block attempts by the Kurds to create an independent Kurdish state of Rojava along the northern border of Syria with Turkey.

However, this has brought the US and Turkey into sharp disagreement, the Kurdish militias in Syria and Iraq have been extremely effective in fighting ISIS, and indeed are thought to the most effective fighting force against ISIS.

Now, turning to Turkey, and I think it was your last question, so we are very concerned – deeply concerned – that Turkey conducted airstrikes earlier today in northern Syria, as well as northern Iraq, without proper coordination either with the United States or the broader global coalition to defeat ISIS. And we’ve expressed those concerns to the Government of Turkey directly. These airstrikes were not approved by the coalition and led to the unfortunate loss of life of our partner forces in the fight against ISIS that includes members of the Kurdish Peshmerga. I would also note that the concerns – or rather note the concerns expressed by the Government of Iraq and reaffirm our view that military action in Iraq should respect Iraqi sovereignty.

And just finally, given the very complex battle space in these areas, it’s vital that Turkey and all partners in the effort to defeat ISIS coordinate their actions as closely as possible as we work together to maintain pressure to destroy ISIS on the battlefield in order to ensure that we meet that goal but also that we ensure the safety of all coalition personnel who are operating in that – as I said, in that theater.

Turkey’s president Recep Tayyip Erdogan apologized for the death of the Peshmerga fighters. He contradicted Toner by claiming that the US had been informed of the airstrikes in advance, and said that the airstrikes will continue:

We are obliged to take measures. We must take steps. We informed the US, Russia, northern Iraq and [Kurdish President Masoud] Barzani before we bombed PKK positions in Sinjar. We will not allow Sinjar to become a PKK base.

Our operations in Sinjar and northern Syria will continue.

These three forces are currently united only because of the fight against the common enemy, ISIS. But once ISIS has been expelled from its stronghold Raqqa, then they may turn on each other. The Kurdish YPG has already threatened revenge against Turkey for Tuesday’s airstrikes.

Generational Dynamics predicts that the Mideast is headed for a major regional war, pitting Sunnis versus Shias, Jews versus Arabs, and various ethnic groups against each other. State Dept. and Rudaw (Kurdistan) and CNN