Thousands in Venezuela took to the streets, again, late Tuesday and throughout Wednesday in the capital, Caracas, to protest dictator Nicolás Maduro’s call to discard the Constitution and convene a “Constituents’ Assembly” to write a new one more favorable to his socialist government.

The current Venezuelan Constitution has been in place since 1999, when late dictator Hugo Chávez approved its adoption.

On Wednesday, Maduro appeared before the National Electoral Commission (CNE) to formally request elections to choose the members of the “Constituents’ Assembly.”

The CNE approved the request, and its director, Tibisay Lucena, praised the move as having the power to “consolidate the Republic and bring peace to Venezuelans.”

Lucena is a longtime supporter of the Maduro government, accused in 2013 of committing fraud during the presidential election that year to ensure Maduro’s victory over opposition candidate Henrique Capriles Radonski, the current governor of Miranda state. Maduro’s courts recently banned Capriles from holding public office for fifteen years without cause.

While the “Constituents’ Assembly” is allegedly an initiative meant to write a new constitution exclusively, Maduro’s government appeared prepared to treat the assembly as the nation’s federal legislature, replacing the National Assembly (AN). The AN has been controlled by opposition parties since the end of 2015, when they overwhelmingly defeated the ruling United Socialist Party of Venezuela (PSUV) in a national vote. Since then, Maduro has attempted to usurp their power on multiple occasions, most recently having his Supreme Court declare itself the nation’s legislature and nullify the AN. That move began the latest wave of protests, which have not ceased, despite the Supreme Court retracting that decision.

Following the creation of the “Constituents’ Assembly,” Maduro and his officials have insisted that the AN “does not exist.”

At the conclusion of his official request to the CNE, Maduro once again appeared on national television dancing with his highest-ranking officials, including Vice President and U.S.-designated drug kingpin Tareck El Aissami:

Maduro has appeared on television dancing numerous times since the latest wave of protests began and has launched a government initiative called “Salsa and Urban Heart,” intended to distract student protesters from objecting to his repressive socialist government by engaging them with hip-hop and salsa dancing.

The initiative has largely failed. Thousands of protesters filled the streets of Caracas Wednesday to protest the new assembly, received once again by police violence. The Bolivarian National Guard (GNB) blocked roads with tanks, tossed tear gas canisters, and shot rubber bullets at peaceful protesters in an attempt to disperse the crowd. The protesters, led by opposition members of the AN, continued their routes through the city, however: 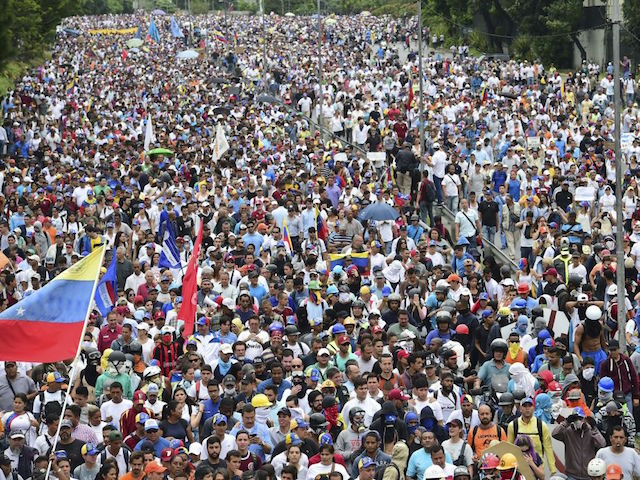 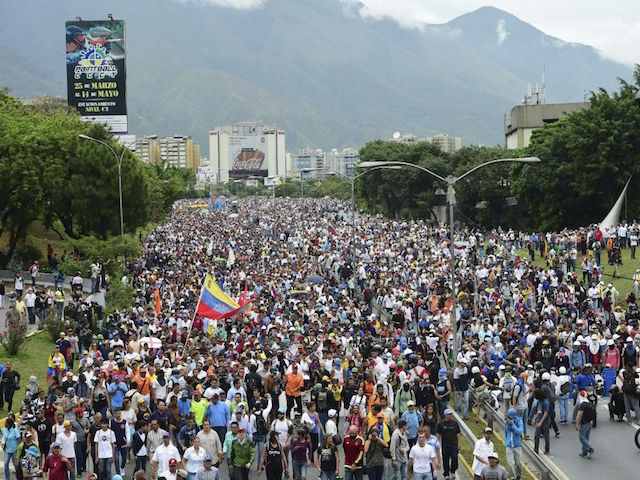 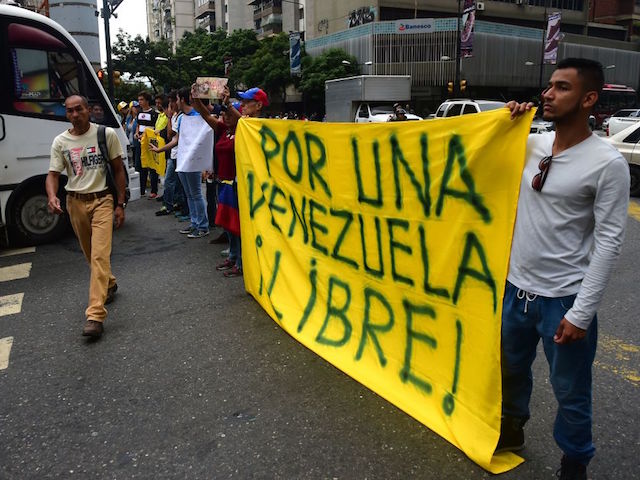 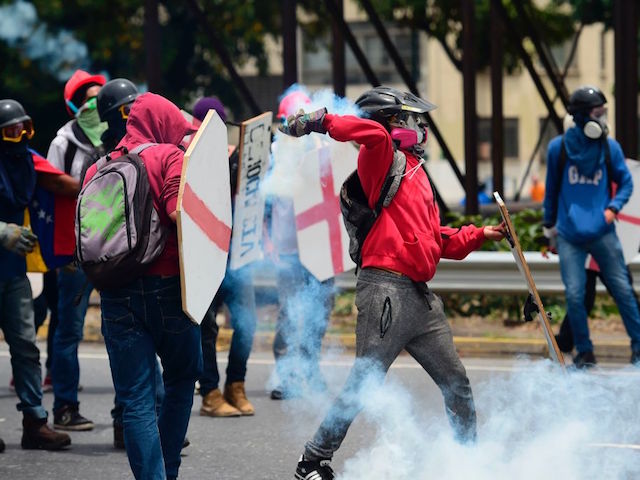 The acting head of one opposition party, Freddy Guevara of Popular Will, was attacked with a tear gas canister and significantly injured. He is reportedly in stable condition. The official leader of the Popular Will party, Leopoldo López, is currently serving a fourteen-year prison sentence for organizing peaceful protests against Maduro in 2014.

The protests have left at least 33 Venezuelans dead, ranging from teenagers to an 87-year-old woman.

Venezuelan opposition leaders are demanding international help and calling for the nation’s military to cease taking violent action against civilians and refuse to take orders from Maduro. Some are satisfied to hear of receiving support from the United States Congress. “We shouldn’t forget that many high level officials have money and properties there, so the U.S. government can be crucial with measures to aid a transition,” Guevara told Fox News before being attacked Wednesday.

“Revealing the criminal ties of those in control of the regime has generated fractures within the government and even in the armed forces,” added María Corina Machado, another opposition leader. “And this could help with a transition.”

A bipartisan group of American lawmakers proposed a new plan to aid Venezuela Wednesday, including sanctions on more socialist leaders and the state oil company and a ten-million-dollar humanitarian package for the starving nation.