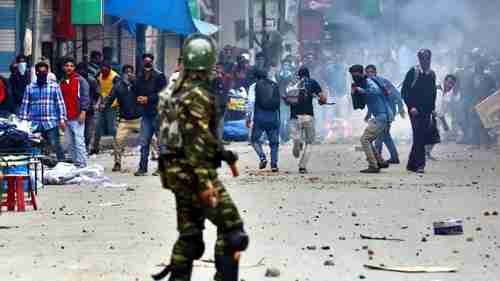 The conflict between Indian security forces and Kashmiris took another leap higher this week as a force of 3,000 men from security forces began a massive counter-militant operation, the largest seen in decades. Soldiers, paramilitary troopers and policemen started cordon operations and house-to-house searches in 20 villages in and around the restive Shopian district in southern Kashmir, beginning on Thursday.

The operation follows a terrorist attack in Shopian on Tuesday, when militants attacked a police station and took off with five service rifles. On Wednesday, there were two armed bank robberies in the region, where militants took off with thousands of dollars. After the counter-militant operation began on Thursday, clashes erupted between Kashmiri youth pelting stones at security forces.

According to one senior police officer, “It is impossible to capture the militants, but we hope there will be contact [exchange of fire] with them in the course of the day.”

Clashes between Kashmiris and security forces increased significantly after July 8 of last year, when Burhan Wani, the leader of the Kashmir separatist group Hizbul Mujahideen, was killed by Indian police fire. Security forces responded harshly to the violence by using pellet guns, with the result that 1,000 people lost their vision in one eye and five were blinded. Thousands of Kashmiri youths were arrested.

As I’ve written several times, from the point of view of Generational Dynamics, Kashmir is replaying previous generations of violence according to a fairly standard template. India’s previous two generational crisis wars were India’s 1857 Rebellion, which pitted Hindu nationalists against British colonists, and the 1947 Partition War, one of the bloodiest wars of the 20th century, pitting Hindus versus Muslims, following the partitioning of the Indian subcontinent into India and Pakistan.

Now, as the survivors of the 1947 Partition War have almost all died off, leaving behind younger generations with no fear of repeating past disasters, Kashmir is repeating the violence of 1857 and 1947.

As the weather has warmed in the last few weeks, the violence has been increasing. Generational Dynamics predicts that Kashmir is returning to full-scale war, re-fighting the extremely bloody partition war of 1947. Exactly when this full-scale war will occur cannot be predicted, but there are still several long, hot months of summer this year, and there is no hope that the clashes will subside until, perhaps, when winter arrives again.

Many people are comparing the current Kashmir violence with temporary violence that occurred in the 1990s. But there are
significant differences between today’s violence and the 1990s violence.

In the 1990s, there were still plenty of survivors of the bloody 1947 partition war, and these people would have held their children
back, saying that it’s better to suffer a little discrimination than to get killed.

Today, in a generational Crisis era, young people seem to have no fear of being killed. This represents a significant change of mood. Even more alarming, for the first time, young girls are joining the boys in throwing stones. This change in mood is a significant difference from the 1990s.

Another difference is that today, local Kashmiri militants are collaborating with militants from Pakistan terror groups, including
Hizbul Mujahideen and Lashkar-e-Toiba. The foreign terrorist supply weapons and get advance information about topography, routes, movement of Indian troops. This makes the separatist militants far more dangerous than they were 20 years ago. BBC and Hindustan Times and Geo TV (Pakistan)

As we described above, India’s massive counter-militant operation began just after militant attacks on a police stations and two armed bank robberies. During the past seven months, there have been 13 incidents of bank robbery, with militants looting hundreds of thousands of dollars.

The number of bank robberies has gone up started increasing dramatically in November of last year, and many analysts relate the
increase to the ‘demonetization’ program announced by India’s prime minister Narendra Modi at that time. The policy declared high value 500-1000 rupee notes to be worthless, with the stated objective of reducing corruption. However, the policy was something of a disaster, since many people had no valid cash to purchase necessities like food.

Shortly after the ‘demonetization’ policy went into effect, India’s defense minister Manohar Parrikar bragged that the demonetization program has substantially reduced the amount of violence in Kashmir, by reducing incidents of stone-pelting. According to Parrikar:

However, another outcome of the demonetization program seems more certain, following the “Law of Unintended Consequences.” With the counterfeit 500-1000 Rs notes worthless, militants needed to get cash from another source, and that other source has apparently turned out
to be bank robbery. India Today and Rising Kashmir and Kashmir Reader

Permanent web link to this article