In his trip to Fatima, Portugal, this weekend, Pope Francis canonized two shepherd children who purportedly had a vision of the Blessed Virgin Mary 100 years ago, who warned that a life devoid of God leads to hell.

Our Lady “foresaw and warned us of the risk of hell where a godless life that profanes Him in his creatures will lead,” Francis said during the canonization Mass Saturday. Such a life is “frequently proposed and imposed,” he said.

Francis traveled to Portugal for the 100th anniversary of the first of six apparitions of the Virgin Mary to three young shepherds, two of whom he declared to be saints: Francisco and Jacinta Marto. The third shepherd, who became a religious sister with the name Sister Lucia, died much more recently—in 2005—and her cause for sainthood is also underway. 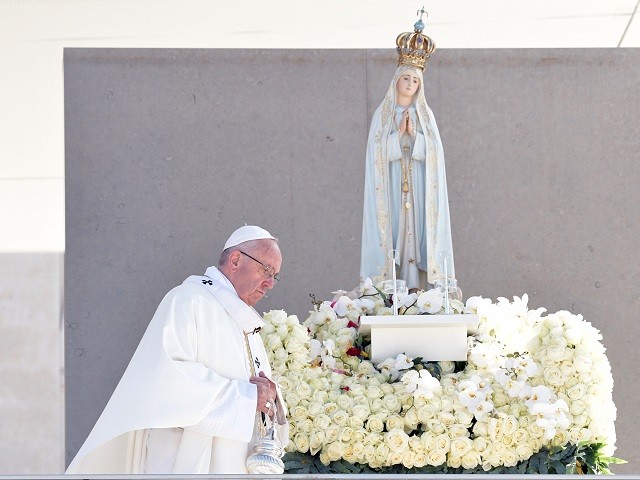 Pope Francis celebrates a centenary mass marking the apparition of the Virgin Mary at Fatima.

Portugal was rife with anti-Catholic sentiment in 1917, and local authorities did everything in their power to coerce the children into denying the story of the apparitions, which were drawing increasing interest from the people.

Yet in spite of offers of bribes as well as threats of death by being boiled in oil or being locked in a cell with criminals, the children never recanted their story. In 1930, the church officially recognized the apparitions as authentic.

Pope John Paul II beatified Francisco and Jacinta on May 13, 2000, on the 83rd anniversary of the first apparition of the Virgin Mary at Fatima. Both children were under 12 years old when they died, and are the youngest non-martyrs to be declared saints in the history of the Catholic Church.

As part of the apparitions of 1917, the children asserted that the Virgin Mary had granted them a vision of hell. In Lucia’s words:

Our Lady showed us a great sea of fire which seemed to be under the earth. Plunged in this fire were demons and souls in human form, like transparent burning embers, all blackened or burnished bronze, floating about in the conflagration, now raised into the air by the flames that issued from within themselves together with great clouds of smoke, now falling back on every side like sparks in a huge fire, without weight or equilibrium, and amid shrieks and groans of pain and despair, which horrified us and made us tremble with fear.

Lucia claimed that the vision “lasted but an instant” and added that if Mary had not already promised to take them to heaven, “I think we would have died of fear and terror.”

Pope John Paul II had a special devotion to Our Lady of Fatima, and credited her with saving his life from an assassination attempt by a Turkish gunman named Mehmet Ali Agca on the exact same day—May 13—in 1981. Despite the fact that Ali Agca shot the Pope at point blank range, the bullet missed his heart, something that his would-be assassin was himself unable to explain.

Pope John Paul himself reflected years later, on the anniversary of the shooting, that “it was a mother’s hand that guided the bullet’s path and in his throes the Pope halted at the threshold of death.” The Pope gave the bullet extracted from the jeep after the assassination attempt to the Bishop of Fatima, who had it set in the crown of the statue of Our Lady of Fatima.

Present for the canonization Saturday was Lucas Batista Maeda de Mourao, a ten-year-old Brazilian boy who was miraculously cured through the intercession of Francisco and Jacinta. In 2013, Lucas fell 21 feet from the window of his grandfather’s home, suffering severe brain damage. As his father picked him up from the sidewalk to take him to the hospital, he invoked the intercession of Our Lady of Fatima, Francisco, and Jacinta and later that night he and a local community of Carmelite nuns prayed to the two young visionaries to intercede with God to heal the boy.

Several days later, to the physicians’ astonishment, the young boy got up and walked home completely cured.

Last February, the Vatican’s Congregation for the Causes of Saints, after consulting with medical experts, ruled that the boy’s cure could not be scientifically explained. Francis accepted the cure as the miracle needed to open the door to the children’s canonization.