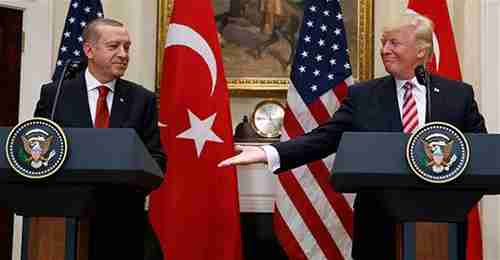 Erdogan and Trump after their meeting on Tuesday (AP)

It is common to read about national security forces in other countries bashing peaceful anti-government protesters, but it is a shock for it to happen in Washington, D.C. But that is what happened on Tuesday evening when Turkey’s security forces brutally attacked peaceful protesters in front of the Turkish embassy.

The attacks occurred shortly after Turkey’s president Recep Tayyip Erdogan met with president Donald Trump in the White House, and then returned to the Turkish embassy.

Witnesses, backed by social media video, say that Erdogan’s security forces broke through DC police lines and attacked protesters outside the embassy carrying the flag of the Kurdish PYD party.

Some social media video shows Turkish officials dressed in suits beating and punching people in the crowd and, in at least one case, kicking out at a woman lying on the ground curled up to protect herself.

The PYD is a left-wing Kurdish political party in Syria affiliated with the Kurdistan Workers’ Party (PKK), a terrorist group that has conducted numerous terrorist attacks in Turkey, and has conducted an on-and-off civil war in Turkey for decades. There were 11 people hurt, including on US police officer. Washington DC police called in reinforcements and separated the two sides, making two arrests.

It is possible that the perpetrators of the attack cannot be prosecuted because they have diplomatic immunity. However, some analysts say that diplomatic immunity does not apply to the security detail traveling with a foreign leader.

This is not the first such incident. In March of last year, Erdogan was on his way to visit the Brookings Institute in Washington to give a speech. While he was en route, Erdogan’s security personnel kicked both Turkish and Western journalists and protesters in front of the Brookings building.

An even worse incident occurred in Ankara in December of last year, when a member of Turkey’s security forces shot and killed Russia’s ambassador to Turkey.

The US State Dept issued this statement on Wednesday morning:

We are concerned by the violent incidents involving protestors and Turkish security personnel Tuesday evening. Violence is never an appropriate response to free speech, and we support the rights of people everywhere to free expression and peaceful protest.

We are communicating our concern to the Turkish government in the strongest possible terms.

NY Times and Times of Israel and US News and Foreign Policy (1-Apr-2016) and US State Dept.

Turkey’s media are putting a positive spin on the outcome of Tuesday’s meeting of Turkey’s president Recep Tayyip Erdogan with president Donald Trump. They are emphasizing the friendly smiles and handshakes, as well as the “new awakening” in relations between the two countries, without focusing on the fact that Erdogan left the meeting empty-handed.

Erdogan had two major agenda items for the meeting:

However, Trump and Erdogan did agree that they should both “fight terror.”

The meeting between Trump and Erdogan lasted only 22 minutes, suggesting that it might have been simply a preparatory meeting for further negotiations in the future. VOA and Hurriyet (Turkey) and Daily Sabah (Turkey)