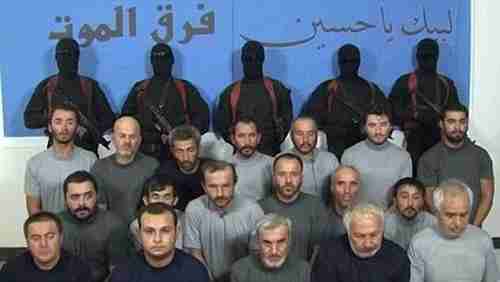 We have been reporting on the growing Mideast crisis, with numerous Arab nations, led by Saudi Arabia, breaking diplomatic relations with Qatar and imposing harsh commercial sanctions that threaten Qatar’s economy. It has been widely reported that the crisis was triggered by President Donald Trump’s recent visit to Saudi Arabia, but new reports indicate that the reason was completely different.

It seems that in April, Qatar paid $700 million to Iran and Shia militias supported by the Syrian regime. Furthermore, up to $300 million more was paid to the al-Qaeda linked group Hayat Tahrir al-Sham (HTS, Liberation of the Levant Organization). The ransom was paid to gain the freedom of 26 people in a hunting party that included members of the Qatari royal family, who had been kidnapped in southern Iraq in December 2015. The Saudis only learned of the ransom payment in the last couple of weeks.

HTS is the latest name change for what was originally called Jabhat al-Nusra (al-Nusra Front) when it was officially the Syrian branch of al-Qaeda. Then, in July 2016, Jabhat al-Nusra announced that it was splitting with al-Qaeda, and was changing its name to Jabhat Fateh al-Sham (JFS, Front for the Conquest of Syria). The reason given was that the group wanted to create an alliance with “moderate” militias fighting against Bashar al-Assad, but could not do so because none of them wanted to be linked to al-Qaeda. Then, in January of this year, JFS did merge with four other militias, and called itself Hayat Tahrir al-Sham, or HTS.

An unnamed official is quoted as saying:

So, if you add that up [the $300 million paid to HTS] to the other $700 million they paid to Iran and its proxies, that means Qatar actually spent about a billion dollars on this crazy deal.

Well, this “crazy deal” was apparently the last straw for the Saudi authorities, because it confirmed all the claims that Qatar was funding al-Qaeda and Iranian extremism, although not in the way that it had been reported. The Saudis were so furious, they initiated the diplomatic break.

Many in the mainstream media have said that the Trump visit “caused” the split by “emboldening” the Saudis. That concept never made sense to me. I said that Trump’s visit “triggered” the split, meaning that the forces were in place for the split to occur sooner or later, when the time was right.

From the point of view of Generational Dynamics, this is an important distinction. Journalists like to take the easy road of saying that politicians, especially the US president, cause all the events that happen in the world. But the things that I write about are caused by generational pressures that build up over years and decades, and politicians have nothing to do with them, except perhaps to trigger an event that was going to happen anyway.

So now President Trump believes that he is going to bring an end to Islamist terrorism, and he is going to bring peace to the Israelis and the Palestinians. I am going to respond in pretty much the same way that I responded to President Bush’s “Mideast Roadmap to Peace” in May 2003. Just as Islamist terrorism is going to continue and grow, Jews and Arabs are going to refight the bloody war that occurred in 1948 with the partitioning of Palestine and the creation of the state of Israel. The generational pressures have been building to this war for decades, as if a huge tsunami was launched in 1948 and is just about to reach shore. And the war cannot be stopped by a politician any more that you can stop the tsunami with a bucket. Times of Israel and Daily Mail (London)

How to stop lone wolf attacks in London and Manchester

Mr. Nazir Afzal was Chief Crown Prosecutor of the Crown Prosecution Service for North West England from 2011–15. A Muslim himself, his tenure was controversial because he vigorously prosecuted Muslim who had committed crimes, and he was critical of the Muslim community for not taking responsibility for stopping jihadist attacks.

He was interviewed on the BBC World Service on the question of what authorities should do to prevent lone wolf attacks, after the recent terror attacks in London and Manchester.

Afzal is highly critical of the political correctness that causes far too much tolerance of extremism in the United Kingdom (my transcription):

People have been treading very carefully around issues. We’ve mentioned before, talked about honor killings, talked about grooming gangs, these are things I’ve prosecuted in my career over the last quarter century.

On each occasion, much of the reason why things weren’t being processed, or justice wasn’t being delivered effectively, was because people were thinking it was too difficult, or there were perhaps understandable concerns about being seen as racist or religiously discriminatory in some way, shape or form.

The question being discussed is why young Muslims are being radicalized or turned into extremists who may one day conduct terror attacks. Afzal said that his own Muslim beliefs are highly personal, and he contrasted his Muslim beliefs to those of the jihadists:

Islamists believe that they should be able to impose their version [of Islam] on everybody else, and much of that sadly is either preachers who are from abroad, and who are able to carry on proselytizing this kind of thing. Or online.

The lazy thing the government does – and by this I mean local government, national government, and anybody in authority – policing you name it – hospitals – anybody – they go to the usual suspects, and they are invariably what is commonly called ‘the community leader.’

Now I can assure you that we [Muslims] don’t have community leaders. The majority of Muslims in the UK are under 25, they’re female, and they’re from relatively low income backgrounds. But these community leaders are invariably male, middle class, professionals, maybe over 40 or 50. And so when you talk to young people, and I’ve been doing a lot of that, they say, they don’t have a voice. They say that nobody listens to them. They say that the people you — you as in the state — are listening to have no sense of what needs to happen.

According to Afzal, authorities should be supporting and talking to Muslim women’s groups, because these groups live in the communities, they know the families, and they know which children are likely to become radicalized:

To answer your second question, who should they be talking to, yes, they should be talking to those voices that don’t have one. And the people who are doing the work. My experience is, and i’ve worked with dozens of women’s groups around the country — Muslim women’s groups around the UK — they’re doing to phenomenal work. They already have access to families, they’re already trusted in those communities. Once they identify somebody within a family, for example, who might be at risk of radicalization or extremism or any other vulnerability, they insure that they’re given levels of support which protect not just that child, but protect the rest of us. And they are doing this on a shoestring. …

[The] signs are only indicators. You don’t know until you’ve actually spoken to somebody whether they are being radicalized or not. You have to understand that so many people in this UK, and elsewhere I imagine, are having some kind of identity crisis. Many many others are suddenly falling into drugs. We have a significant problem in the UK with Muslim communities and drugs. You know, time and time again, I’ve tried to get major Muslim representative bodies to talk about issues like Muslims in prison, and women Muslims in prison. And they rarely ever do — I can’t think of any example actually where they’ve talked about it. There’s a charity for example, Muslim women in Prison, and that charity is close to closing. and that tells me that we have our priorities wrong.

This story about lone wolf attacks in Britain is paired with the preceding story about the Qatar split because from the point of view of Generational Dynamics, they both make the same point: That people in authority, whether politicians or “community leaders,” are not really controlling major events. Events are determined by masses of people, entire generations of people. In the Mideast, it’s the rise in popularity of the Muslim Brotherhood. In Britain, it’s the rise of a new generation of young people, 2nd and 3rd generation immigrants from Muslim countries.

Back in 2005, when the 7/7 London subway bombings occurred, I was always struck by the immense sadness of the parents of the kids who had perpetrated the bombings. They had no idea what their kids were planning. One Muslim man said that he was worried about the attitudes of his own children. “The bombers were just like us. And if they’re just like us, then more of them could be anywhere, couldn’t they?”

One of the bombers was 22-year-old Shehzad Tanweer. Months later, his father, Mohammed Mumtaz Tanweer, spoke out for the first time:

All the bombings and killings were awful. Only the group of four [bombers] or God alone knows why they carried out this terrible act.” He added: “As far as I can understand, my son was more British in his orientation than anything else. He has planned his career in sport. Even on the night before he died, he was playing cricket.

One can barely imagine the immense sadness of a parent whose child commits suicide carrying out one of these heinous acts. I don’t know if Nazir Afzal’s suggestion of working with Muslim women’s groups would work, but it makes enough sense that it’s worth a try. Daily Mail (London)