In a major victory for China, Panama switches allegiance from Taiwan to China 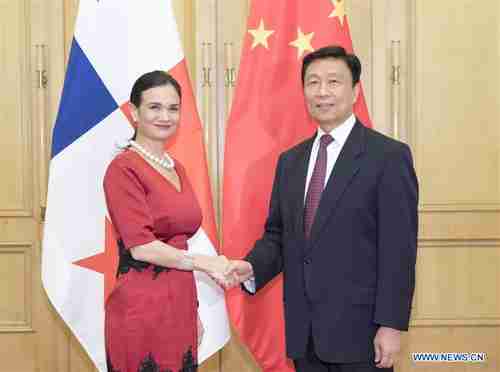 A joint statement from China and Panama said:

This is a complete victory by China over Taiwan. Taiwanese officials were infuriated by what they saw as Panama’s betrayal. Taiwan and Panama have had 105 years of diplomatic relations. In 2014, Taiwan’s then-president Ma Ying-jeou visited Panama, and was assured by Panama’s president Juan Carlos Varela that maintaining diplomatic relations with Taiwan is most beneficial to Panama, even though the trade volume between China and Panama was 22 times that between Taiwan and Panama.

Absolutely not. Our relationship with Taiwan has to be respected. First of all, when you have the trust and friendship, we value it very much. This is something that has been built for many, many years and you take care of that and you appreciate it and you keep it. Panama and Taiwan are like brothers and sisters.

Well, apparently Varela and his wife didn’t appreciate it very much, in view of Tuesday’s announcement. Shanghai Daily and China Post (Taiwan, 7-Oct-2014) and Latin American Herald Tribune and Formosa TV (22-May-2016)

Something that I have been reporting on for over a decade is that China is losing a battle with time over reuniting Taiwan with China. In 2005, it was already clear from polls on the question “Do you feel Taiwanese, Chinese or both” that over a period of years, the number of people answering “Taiwanese” was increasing. The polls also show that it is the older people who feel “Chinese” and the younger people who feel “Taiwanese.” This is a typical generational situation, where older generations who survived the last generational crisis war (Mao’s Communist Revolution, 1934-49) were willing to compromise to prevent a new war, while the younger generations, with no personal memory of the war, are not willing to compromise.

From 2005: Taiwan poll results to question: ‘Do you feel Taiwanese, Chinese or both?’ (WSJ)

A poll conducted in June of last year showed overwhelming support for independence from China. Unification was favored by only 18.4%, with 66.4% opposed. In the 20-29 age group, 72 percent supported independence.

The surge in support for independence resulted in an overwhelming and historic victory in the presidential election for Tsai Ing-wen, the leader of the Taiwan’s pro-independence Democratic Progressive Party (DPP), in January 2016. Since Tsai has taken office, relations between China and Taiwan have been increasingly hostile.

So after Tuesday’s announcement that Panama breaking relations with Taiwan, Tsai was defiant:

Taiwan is committed to preserving Cross-Strait peace, but China’s move has impacted the status quo. We will not sit idle when our national interests are threatened…

Coercion and threats will not bring the two sides together. Instead they will drive our two peoples apart. On behalf of the 23 million people of Taiwan, I declare that we will never surrender to such intimidation…

We are a sovereign country. This sovereignty cannot be challenged nor traded. China has continued to manipulate the ‘one China’ principle and pressure Taiwan’s international space, threatening the rights of the Taiwanese people, but it remains undeniable that the Republic of China [Taiwan] is a sovereign country. This is a fact China will never be able to deny. … We won’t allow our sovereignty to be challenged or be exchanged for anything.

Now, this speech by Taiwan’s current president brings us to China’s “anti-secession law.” This law, passed in 2005, requires China to invade Taiwan if Taiwan makes any move toward independence, whether by word or by deed.

So Tsai Ing-wen has refused to endorse the “One-China policy,” also called the “1992 Consensus,” which states that there is only one China, and leaves some ambiguity as to what that means. With Tsai rejecting the One-China Policy, and now stating that “We won’t allow our sovereignty to be challenged or be exchanged for anything,” it is arguably the case that Taiwan has already taken steps to trigger the anti-secession law.

Chinese officials must know that time is not on their side. They can also read the polls that say that as time goes on, more and more Taiwanese favor independence, and fewer and fewer Taiwanese favor unification. A war between China and Taiwan is 100% certain, and it will be at a time of China’s choosing. Taipei Times and Washington Free Beacon and South China Morning Post (Hong Kong)

At some point, China will decide to take military action, as required by the anti-secession law. Until that time, China is expected to continue taking measures to isolate Taiwan diplomatically, even though such measures are counter-productive, in that they infuriate the Taiwanese people and increase the support for independence.

With the defection of Panama, there are only 20 countries left in the world that diplomatically recognize Taiwan:

Completely apart from the diplomatic issues, China’s closer relations with Panama are an economic coup. China is the heaviest user of the Panama Canal, and China has invested heavily in Panama’s largest port, Margarita Island, and is developing 1,200 hectares of land around the canal.

China is expected to target the 20 other countries, one by one. China has invested heavily in Nicaragua and the Dominican Republic, and they may following Panama soon. Jorge Guajardo, Mexico’s former ambassador to China, tweeted: “Big question is, will Vatican ditch Taiwan for Beijing?” South China Morning Post (Hong Kong) and Washington Post and Reuters and Foreign Policy